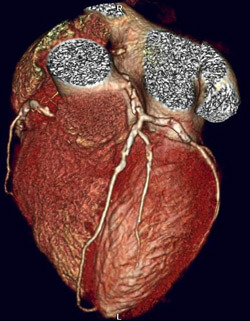 Johns Hopkins Medicine has installed for three months of initial safety and clinical testing a 256-slice computed tomography (CT) scanner, believed to be the world’s most advanced CT imaging software and machinery.
The new 2-metric-ton device - the first of its kind in North America and only the second outside of Japan, where its manufacturer is based - has four times the detector coverage of its immediate predecessor, the 64-CT.  It can measure subtle changes in blood flow or minute blockages forming in blood vessels no bigger than the average width of a toothpick (1.5 millimeters) in the heart and brain.

Made by Toshiba, the Aquilion beta 256 is expected to win approval for general clinical use within a year, its makers say.  Hopkins is negotiating purchase of the equipment, whose sticker price is more than $1 million.
Johns Hopkins cardiologist João Lima, M.D., who will lead all cardiovascular testing, says the scanner’s strength means it can find the earliest signs of restricted blood flow, long before symptoms appear or an organ becomes permanently damaged.

Lima, an associate professor at The Johns Hopkins University School of Medicine and its Heart Institute, says blockages in arteries, veins or capillaries in any organ can simmer for years, with signs of chest pain, severe fatigue and headache emerging only after the disease has become seriously life-threatening. The key technological advance of the 256-CT, which looks like a patient table surrounded by a massive, doughnut-shaped metal ring, called a central gantry, is its greater number of detectors, which cover in a single scan four times the area of the 64-CT.  Hopkins currently has a 64-slice CT scanner.

According to company descriptions, a single rotation of the device’s X-ray-emitting gantry can image a diameter of 12.8 centimeters (or 5 inches), a slice thick enough to capture most individual organs in one swoop, including the brain and heart, entire joints, and most of the lungs and liver.  This is an increase in coverage from 3.2 centimeters per image with the 64-slice, which required several rotations or scans to fully image an organ.
Interventional neuroradiologist Kieran Murphy, M.D., an associate professor of radiology at Hopkins, says he believes that whole-head perfusion imaging scans will be able to find slowed blood flow areas in the brain that are vulnerable to stroke, and with just one scan.

CT imaging consists of X-rays sent through the body to produce digitized signals that can be detected and reconstructed by computers.  Each of the 256 detectors on the new machine picks up a “slice” of an organ or tissue.  The more detectors, the better is the resolution of the picture.  A computer puts all the slices together to render detailed, 3-D images of the heart or brain and surrounding arteries.  In some cases, a patient is injected with a contrast solution to increase the visual detail.

Murphy, who is in charge of neurological testing with the scanner, says the expanded coverage is a “tremendous advantage” over older machines, where images had to be matched and stacked, “like reconstructing layers of a marble statue on top of each other over time,” a technologically complex procedure.
Cooling systems, he also notes, will no longer be required to deal with the friction and heat caused by multiple rotations of the gantry, although a cooling system will still be required for the computer hardware.  Murphy says the increase in data traffic will range from 5 gigabytes to 10 gigabytes per scan with the 256-CT.  With 64-CT, the range is 1gigabyte to 2.5 gigabytes.

However, he does not expect the higher volume of data to slow testing, which is expected to speed up imaging the brain to less than 1 second for the 256-CT, down from 4 or 5 seconds with the 64-CT.  Lima says the overall time required for testing the heart will similarly decline to 1 or 2 seconds with the 256-CT, from eight to 10 seconds with the 64-CT.
Lima says the new, faster device will also make it possible to scan patients with arrhythmia, or irregular heartbeats.  The 256-CT can acquire a full image in the time it takes for just one beat, whereas the 64-CT takes longer, as much as six or eight heartbeats.  Any disturbances between successive beats, he notes, such as those produced in arrhythmia, can lead to distortions in the composite scanned image.

A single scan with the 256-CT device can also perform a full bank of five key diagnostic tests on hearts or single tests in the brain of the most severely ill patients, exposing them to far less radiation, as little as one-eighth to one-third of the dose required in testing with the 64-slice scanner.

Because single scans with the 256-CT should provide a patient’s calcium score, to detect hardening of the arteries, along with blood-flow data and strength of the pulse and heartbeat, it is expected to have value in determining more precisely the best candidates for more invasive procedures, such as cardiac catheterization or catheter angiograms of the brain.
The new scanner and nine technicians are on loan to Hopkins from Toshiba America Medical Systems Inc.  Installation and renovation costs for its temporary installation at Hopkins were also paid for by Toshiba.