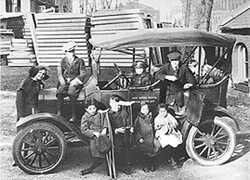 To celebrate its centennial milestone, Johns Hopkins Social Work is hosting a party on Friday, Sept. 28, in the Turner Building Concourse of the East Baltimore medical campus, from 5 to 7 p.m.  At the party, officials will announce the winner of a $1000 prize for creating the best artwork symbolizing social work at Hopkins and the artwork will be displayed in The Johns Hopkins Hospital in a location to be determined.

On Oct. 13, a celebratory gala will be held at the Radisson Plaza Lord Baltimore Hotel from 7 p.m. to 1 a.m.

Reporters wishing to attend the events should contact Gary Stephenson at 410-955-5384 or at gstephenson@jhmi.edu .

Grinding poverty, splintered families, tuberculosis, syphilis, typhoid and polio were daily realities for the poor in 19th century Baltimore. For many, their only help was provided by the fledging social worker services of The Johns Hopkins Hospital. More than a century later, the need - and the mission - remain remarkably similar for Johns Hopkins social workers, and new problems have been added to the urban mix: widespread drug abuse, immigration, an aging population, crime and homelessness.  It is this urgent and abiding need that defines the role of the Hopkins social worker.

Johns Hopkins was among the first hospitals in the nation to recognize the need for social workers and to establish a department of social work as an integral part of the practice of medicine. What began in 1898 as an innovative approach to training medical students - sending them into the community to understand how environmental living conditions affected their patients’ health - evolved into the Johns Hopkins social work program, formally established in 1907.  It soon became a model for hospitals throughout the United States.

Although the program began with only a handful of practitioners, the current workforce of 108 social workers see thousands of patients a year, and the services they provide have become increasingly specialized. Today, there are five divisions of social work at Hopkins: AIDS, Pediatrics/Ob-Gyn, Medicine/Surgery, Oncology and Psychiatry.  Social workers can help patients and their families with a variety of issues, ranging from health insurance counseling to ensuring post-discharge care to obtaining housing to something as basic as helping them find their next meal. Much of the help centers on assisting patients who are dealing with chronic medical conditions and ensuring that patients have access to community resources.

REPORTER’S NOTE: To arrange interviews with Hopkins social workers, several of whom have worked in the field for more than 20 years and can detail the changes in their profession and the social problems they address, call Gary Stephenson at 410-955-5384 or e-mail him at gstephenson@jhmi.edu. Interviews with families who have benefitted from Johns Hopkins social workers can also be arranged.