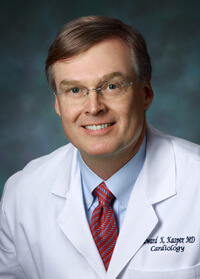 Physician-science investigator Edward Kasper, M.D., is an expert in chronic heart failure and the heart transplantation that often results from the disease.

March 31, 2009- Physician-science investigator Edward Kasper, M.D., an expert in chronic heart failure and the heart transplantation that often results from the disease, has been named the new clinical director of the Johns Hopkins University School of Medicine’s Division of Cardiology and co-director of the School’s Heart and Vascular Institute.

A former undergraduate student (class of ’79) at Johns Hopkins, Kasper has spent nearly his entire academic medical career at the institution, where he also completed his medical internship; residency, including one year supervising 20 other so-called house officers as one of four acting chiefs of service; and cardiology fellowship.

Since 1987, Kasper, 52, has taught medical students, clinical residents and research fellows and treated thousands of patients at Johns Hopkins. He succeeds Richard Lange, M.D., who led clinical operations in the division since 2003 and will remain active as adjunct faculty. He also succeeds Lange as the E. Cowles Andrus Professor of Cardiology.

In addition to managing day-to-day clinical cardiology operations, Kasper will continue his research into the biological origins of heart failure and the underlying reasons why the body rejects some transplanted hearts and not others.

“Dr. Kasper has already established a successful track record, expanding and upgrading our cardiology practice at Johns Hopkins Bayview Medical Center to the world-class level of excellence that people have come to expect from Johns Hopkins,” says Gordon Tomaselli, M.D., the newly appointed director of cardiology. “Now he can put this expertise to good use, advancing cardiology service standards across all other hospitals and clinics within Hopkins’ health system,” adds Tomaselli, the Michel Mirowski, M.D., Professor of Cardiology at the School and also a co-director of its Heart and Vascular Institute.

For the last five years, Kasper served as the director of the cardiology division at Johns Hopkins Bayview Medical Center, the second-largest hospital in the Johns Hopkins Health System. There, he led a growing team of more than 20 cardiologist and 100 clinical and research staff in establishing medical services that complement and replicate those available at Johns Hopkins’ main medical campus. Under Kasper’s leadership, the number of faculty and staff nearly tripled, and patient numbers more than doubled.

As clinical head of the Johns Hopkins’ Division of Cardiology, Kasper will oversee a group of 713 people, including 102 faculty and 87 fellows, who treat more than 4,000 hospital inpatients and nearly 30,000 more outpatients a year.

The division Kasper inherits with Tomaselli has earned national and international acclaim, and has been consistently ranked by U.S. News & World Report among the top four in cardiology among American academic medical centers.

Kasper studied natural sciences during his undergraduate education at Hopkins before earning his medical degree in 1984 from the University of Connecticut’s School of Medicine. He then returned to The Johns Hopkins Hospital to complete his medical training, joining the faculty in 1987 as an instructor in medicine, and completing his specialization in cardiology in 1991. Kasper then moved to Vanderbilt University in Tennessee to oversee its transplant program but quickly returned to Hopkins in 1993 to head up the same service.

He is a fellow of the American College of Cardiology, having served on its board of governors from 2002 to 2006. In addition, Kasper is a fellow of the American Heart Association, where since 2006 he has served on its clinical cardiology committee. He is also a longstanding member of numerous societies dedicated to improving the lives of heart transplant recipients and those awaiting a donated organ, including such organizations as the International Society for Heart and Lung Transplantation, the United Network for Organ Sharing, the Heart Failure Society of America, and the Working Group of Transplant Cardiologists.