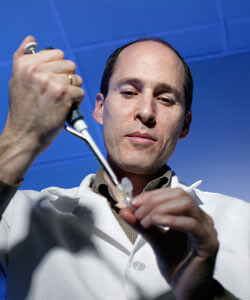 March 11, 2009- Jeremy Nathans, M.D., Ph.D., professor of molecular biology and genetics, neuroscience and ophthalmology at the Johns Hopkins University School of Medicine, has been awarded the sixth annual Edward M. Scolnick Prize in Neuroscience by the McGovern Institute at the Massachusetts Institute of Technology. The Scolnick Prize is awarded each year to recognize an individual who has made outstanding advances in the field of neuroscience.

“I am very honored to receive this award,” says Nathans. “This award brings attention to the entire field of vision research and to the many scientists who have contributed to it.”

Nathans identified the genes that code for the three kinds of light-sensing pigment molecules found in the cone cells — one of the two types of photoreceptor cells in the retina, the other being rods. These pigments are critical for color vision, and Nathans has shown that alterations in these pigment genes are responsible for all of the common types of variation in human color vision in humans.

In more recent studies, Nathans and his colleagues discovered and characterized genes that control the normal development of the retina, and they determined how defects in these genes disrupt the function and survival of retinal cells. These studies have revealed several defects that lead to human retinal diseases including Stargardt disease, the most common type of macular degeneration in children and young adults.

Nathans and colleagues at Johns Hopkins also have determined the mechanism of the vitelliform type of macular dystrophy, showing that it is caused by abnormalities in a member of a previously unknown family of ion channels — proteins that allow ions to enter and exit cells.

“We are thrilled that Jeremy has been awarded this prestigious prize,” says Carol Greider, Ph.D., the Daniel Nathans Professor and chair of molecular biology and genetics at Johns Hopkins. “His outstanding work over the years on the fundamentals of color vision and retinal development and disease has taught us much of what is known today in the field.It’s such discoveries of the basic mechanisms in biology that move science forward in exciting ways.”

The Scolnick Prize is named in honor of Edward M. Scolnick, former president of Merck Research Laboratories. Scolnick is now an associate member at the Broad Institute of MIT and Harvard, and also serves as a member of the McGovern Institute’s governing board. The McGovern Institute at MIT was established in 2000 as a research and teaching institute committed to understanding how the human brain functions.