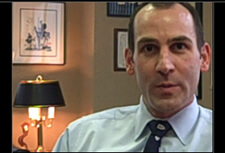 Brad Drummond, M.D., on what this research means to people with COPD

November 25, 2008 -  Lung disease experts at Johns Hopkins are calling for physicians to show much greater caution in prescribing inhaled corticosteroid drugs for people with chronic obstructive pulmonary disease after finding evidence that the widely used anti-inflammatory medications increase the risk of pneumonia by a full third.

More than 11 million Americans, the vast majority former or current smokers, are living with so-called COPD, marked by the potentially fatal, lung-diminishing conditions of emphysema and chronic bronchitis. The inhalers in question greatly relieve such symptoms as shortness of breath, wheezing, phlegm and physical exhaustion from light exercise.

The call for caution is based on the Johns Hopkins team's review and analysis of adverse events recorded in 11 clinical studies that in total involved more than 14,000 men and women with COPD. The team's review, believed to be the largest and most comprehensive performed in the last decade among COPD sufferers, compared adverse events among those who took inhaled corticosteroids and others who did not.

In their report, set to appear in the Journal of the American Medical Association online Nov. 26, researchers found that the increased risk mostly occurred in people taking the highest possible doses, such as 500 micrograms of fluticasone twice daily for a relatively short time (less than two years), whose lung function was 40 percent or lower than expected and who also combined their steroid therapy with bronchodilators, used to keep the airways open.

Researchers say it remains unclear why the treatment increases risk of lung infection, but they suspect that the drugs suppress the immune system.

Despite the increased pneumonia risk, the team found no clear evidence that the drug therapy also pushes up rates for other steroid-related problems, such as bone fractures, nor was there an increase in deaths.

Senior study investigator and critical care specialist Eddy Fan, M.D., says the results of the analysis should not alarm patients or cause them to stop taking their medications but should spur physicians to screen and monitor their patients to find the lowest possible steroid dose that works, especially in the elderly, people with immune system problems, and people who have had multiple bouts of pneumonia and for whom repeat bacterial infection might be a life-threatening complication.

"Inhaled corticosteroids are not of equal benefit to all, and what we are seeing is that the treatment may be more harmful and pose a greater risk of harm to some," says Fan, an instructor at the Johns Hopkins University School of Medicine.

"Physicians really need to strongly evaluate a patient's individual characteristics before prescribing these steroid medications, and patients, in turn, should weigh the risks and benefits of taking the drugs, despite their proven record in providing symptomatic relief," he says.

According to pulmonologist M. Brad Drummond, M.D., M.H.S., who led the study, "catching this bacterial infection can seriously disrupt quality of life, making it harder for COPD patients to breathe and possibly leading to hospitalization."

Drummond says the new findings should serve as a reminder to people with the severe lung disease to take steps that reduce the chance of getting pneumonia, which doubles their risk of dying when compared to people with healthy lungs. He also advises COPD sufferers, in addition to weighing the benefits and harms of steroids, to get the pneumonia vaccination every five years and an annual flu vaccination because these shots reduce the chance of getting a lung infection.

A postdoctoral clinical research fellow at Johns Hopkins, Drummond also advises lung disease sufferers to take additional precautions, including more frequent hand washing, and vigilant monitoring for the first and earliest signs of sickness, such as increased phlegm in the throat, shortness of breath, fever or chills.

In their analysis, researchers culled their 11 key studies from more than 3,100 conducted in over 40 countries. All of the studies tracked men and women with COPD for complications from treatment, including some for pneumonia, bone cracking and death. The 11 studies were all randomized controlled trials completed between 1999 and 2007 that involved participants who had seriously diminished lung function, at less than 70 percent of expected. In addition, all were initially diagnosed with COPD at age 40 and older, which is typically the age group most affected by COPD. About half were prescribed the handheld, disposable corticosteroid inhalers, such as puffers, turbohalers, diskhalers and nebulizers, while the rest were not. And all were monitored for between six months and three years, with some participants taking steroid therapy alone or in combination with bronchodilators, which contain different drugs. Studies that included people with asthma, a related lung disease that complicates treatment of COPD, were excluded from the analysis.

In breaking down the overall rise in risk, the researchers found that in people taking the highest possible dose of each inhaled corticosteroid, there was a 46 percent increase in risk for pneumonia. Infection risk nearly doubled in those who had less than 40 percent normal lung function, as opposed to those whose lungs were stronger.

Drummond says the absence of an overall difference in death rates between users and non-users of corticosteroids was likely due to the short-term follow-up of three years or less across all of the studies.

Fan says further research is needed to identify precisely which groups benefit long-term and which ones do not from inhaled corticosteroids, and to see if there is a link between higher risk and death.

He notes that COPD kills more than 120,000 Americans every year and is expected to become the nation's third leading cause of death in the United States by 2020, ahead of stroke and behind heart disease and cancers.

Funding for this latest study was provided by The Johns Hopkins Hospital's General Clinical Research Center.

In addition to Fan and Drummond, other researchers involved in this study, conducted solely at Johns Hopkins, were Elliott Dasenbrook, M.D., M.H.S.; Marshall Pitz, M.D., M.H.S., now at the University of Manitoba, in Winnipeg, Canada; and David Murphy, M.D.

For additional information, go to: