Quentin Hart grew up in a “food is love” family and saw no reason to skimp on either.

Overweight since elementary school, his social life as an adult revolved around decadent birthday celebrations and lavish potlucks with friends.

By the time he was 37, the Washington, D.C., resident was carrying 417 pounds on his 5-foot-11-inch frame. He had high blood pressure and was at risk of developing diabetes. He was ready for a change.

“I didn’t want to go into my 40s weighing more than 400 pounds,” says Hart, who works for a software company. “I wanted a healthier lifestyle. My husband is a triathlete, and he wanted me to be more active with him. My body wasn’t allowing me to do that.”

In July 2017, Hart had bariatric surgery at Sibley Memorial Hospital, part of the Johns Hopkins Center for Bariatric Surgery. He now weighs 190 pounds, and credits the center with his successful weight loss and improved health.

He no longer has high blood pressure or prediabetes. Travel is easier because he is comfortable sitting in a car or plane. Finding clothes that fit is a pleasure, not a chore. He exercises regularly and joins his husband on hikes and walks.

To earn the accreditation, the center, which performs about 80 bariatric surgeries a year, underwent a rigorous audit showing it met high national standards for care and equipment.

About 93 million people in the U.S. are obese, and 11 million are severely obese, according to the American College of Surgeons, which runs the accreditation program with the American Society for Metabolic and Bariatric Surgery.

· Roux-en-Y gastric bypass: the most popular procedure, which reduces stomach size and bypasses part of the small intestine.

· Laparoscopic sleeve gastrectomy: a newer procedure that removes about 80% of the stomach, for patients with a body mass index higher than 40.

· Adjustable gastric banding: the least invasive procedure, which places an adjustable band around the top part of the stomach to create a small pouch.

Hart, who had a body mass index of about 50, opted for the laparoscopic sleeve gastrectomy in consultation with Lamond.

The surgery itself is just one aspect of the treatment at Sibley and Johns Hopkins Bayview. “It’s a misconception that you could walk into our clinic and have surgery the next week,” says Lamond. “A lot of what we do is patient education. We pride ourselves on not only helping patients lose weight, but curing medical problems like diabetes, hypertension and sleep apnea.”

He asked Lamond whether he needed the surgery, or if he could just continue losing weight with his new regimen. She told him he would lose weight faster, and would be more likely to keep it off, if he had the surgery.

With Hofacre’s help, he adjusted to his smaller stomach and now consumes about 1,200 calories a day. He still talks with Hofacre every month, and he participates in a support group with other patients at Sibley who have had bariatric surgery to talk about things like fueling their workouts and food prep strategies.

Chicken, eggs and vegetables are staples, but no food is forbidden. “I don’t look at what I do as dieting,” Hart says. “I look at it as how I live and eat. If I want cake, I’ll eat it. Just not the whole thing.”

The bariatric surgery center at Sibley Memorial Hospital in Washington, D.C., can be reached at 202-370-6565. Contact the center at Johns Hopkins Bayview Medical Center in Baltimore at 410-550-0409. 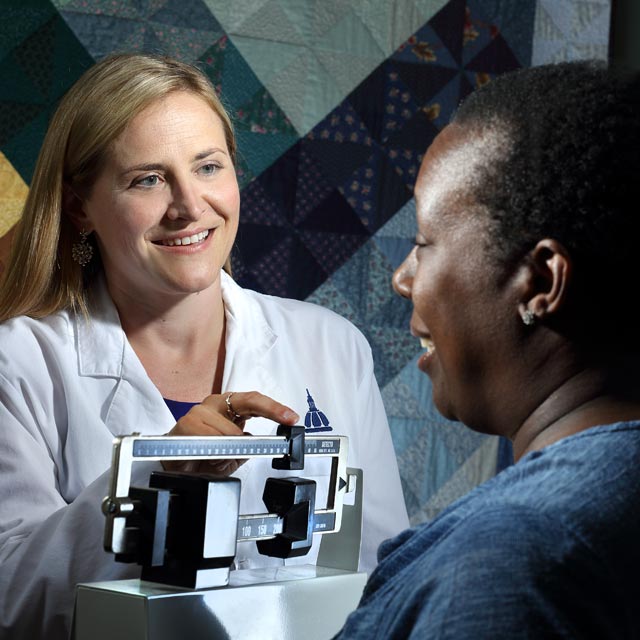 More Than One Tool in the Toolbox