That was the question facing Johns Hopkins pediatric orthopedic surgeon Paul Sponseller when asked to perform scoliosis surgery on 12-year-old Jordyn Bugarin, who is afflicted with the extremely rare connective tissue disorder fibrodysplasia ossificans progressiva, or FOP. Like other surgeons Sponseller was reluctant to operate on the girl, but her poor quality of life pushed him toward the OR. Her spinal curvature was so significant she was forced to walk on the tips of her toes on one side to avoid falling over.

“The only reason we entertained surgery was the severity of her curvature, which caused extreme trunk imbalance when she tried to walk,” says Sponseller. “We’re very cautious about doing any type of surgery for these patients.” Only a few patients in the world with this condition, he notes, have had spine surgery, with results not often successful.

In patients with FOP, for which there is no cure, a mutation in the body’s repair mechanism causes muscle and fibrous tissue to ossify when injured. In many cases, including Bugarin’s, injuries and even the passage of time can cause joints to become permanently frozen in place. Surgical removal of the extra bone growths has been shown to cause the body to repair the affected area with more bone. Then there’s the risk of bleeding. 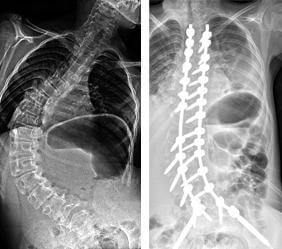 "In surgery, the challenging part for her is the extreme thickness and vascularity of the muscle, its tendency to bleed,” says Sponseller. “The muscle is abnormal, very stiff and not pliable like yours or mine.”

Sponseller went over the risks in pre-operative planning meetings with the leading expert in this disorder, Frederick Kaplan, Chief of the Division of Molecular Orthopaedic Medicine at the University of Pennsylvania School of Medicine. Kaplan, who discovered the mutation, consults on or cares for most of the patients with FOP. He hesitantly referred Bugarin for surgery after realizing how dramatically her body had become deformed.

Before the surgery, Sponseller and Kaplan also conferred with anesthesia and pediatric intensive care teams at the Children’s Center. During the surgery itself, Sponseller used special compounds to minimize bleeding. Still, Sponseller says, from the beginning his patient bled about twice as much as you would expect a child to bleed from scoliosis surgery: “As soon as we started, I could see that this would be a tough ordeal.”

Another significant obstacle was the girl’s fused spine, which helps to explain why the surgery took some 8 hours to complete. New techniques of spinal resection and correction allowed the surgery to be completed more effectively than in prior efforts.

“We had to basically take the spine apart and realign the pieces, the vertebrae, to make it flexible so we could straighten her out,” Sponseller says. “It was twisted almost like a spiral, so we had to adjust our approach 90 degrees or more, turning ourselves to look in from the side of the spine rather than facing it from a normal perspective.” The outcome?

“Highly successful,” says Sponseller, pointing to his patient's pre- and post-surgery imaging (see images above) and improved mobility. “After a challenging week in the hospital, and tireless dedication from the entire Children’s Center team, her body now has excellent balance and she is walking a lot better.”