In mid-November 2020, Baltimore teen Tyona Montgomery complained of a sore throat, a hallmark sign of COVID-19. Suspecting coronavirus was the culprit, her mom, Kristia, got her tested. Positive results for the virus came a few days later on Tyona’s 18th birthday. Self-isolating at home, the teen then lost her sense of taste and smell, and then suffered headaches and eye pain, which kept her in bed all day. That’s when she and her mom decided she needed more than seclusion at home. At a hospital near their Baltimore home, physicians were mystified by her clinical presentation.

“Her heart rate was in the 150s, while her blood pressure was very low — on paper she looked really, really sick,” says Kristia. “But when I saw her on rounds, she was walking around, talking and eating. They couldn’t understand how she was doing this well given her vitals and labs.”

While admitted overnight for observation, however, the high school junior’s symptoms worsened. Her neck began to hurt, she felt nauseous and vomited in her hospital room bathroom, then she felt pain in her heart. Following an EKG and a chest X-ray, doctors added infection and walking pneumonia as possible diagnoses and prescribed antibiotics.

“The doctors said when you come back in the morning, she should be feeling better,” says Kristia.

Far from better, Tyona continued to decline the next day. “She was struggling to breathe, holding her head up to breathe,” says Kristia. “They gave her an echo and said she had fluid in her lungs — they would have to transfer her.”

In the pediatric intensive care unit (PICU) at Johns Hopkins Children’s Center, Kristia received more bad news when a pediatric intensivist met with her to talk about Tyona’s status: “He said, ‘Your baby is really sick.’ I said ‘I know,’ and he said, ‘No, you don’t know. I mean sick like I don’t want to promise anything.’”

Kristia was stunned: “I’m like, what? Then I started to cry, and he said you’d better not, ‘You have to be her rock. You’re here with her, she needs you.’ Then I walked into her room and there were 15 people there, putting in a central line, a heart line, giving her epinephrine. I’m holding her hand, asking her to squeeze my hand, watching her go through this and there’s nothing I can do.”

Then it hit Kristia as she watched the clinicians move around the room in a fluid manner, like choreographed dancers, to manage her daughter’s symptoms: Yes, her daughter was very sick, but there was a calm confidence, Kristia noted, and not the hesitancy she sensed at the referring hospital.

“They knew what to do, they recognized it, they were aware, they had the knowledge,” says Kristia. “The outside hospital was working hard to do what they thought was right, but Hopkins knew as soon as she got here. Here I knew she was safe.”

They are a team of specialists that has been taking a multidisciplinary approach in managing a complex condition related to COVID-19 since the coronavirus hit Maryland in January 2020. At that time, little was known about multisystem inflammatory syndrome in children (MIS-C), but through their experience what was quickly becoming known was its potentially lethal impact on multiple organ systems in the body, including the brain, gastrointestinal tract, heart and lungs. Consequently, several specialties, including cardiology, gastroenterology, infectious disease, neurology, pulmonology and rheumatology, were called to the bedside.

In Tyona’s case, former Johns Hopkins Children's Center pediatric rheumatologist Ekemini Ogbu was among those summoned to the PICU upon her arrival. Ogbu’s main concern was the teen’s ejection fraction (EF), a measure of how well the heart is pumping. Tyona’s EF was very low, a sign of heart failure, which contributed to the team’s diagnosis of MIS-C.

“I was certain she was a patient with MIS-C for sure,” says Ogbu. “We are seeing a number of adolescents coming in very sick, but this case was even more significant because of her heart failure.”

How does MIS-C affect the heart?

Pediatric cardiologist Lasya Gaur describes a cytokine release, an inflammatory immune response to an infection — likely COVID-19 in this case — that can affect the heart muscle and other blood vessels, including coronary arteries, and lead to heart failure, abnormal heart rhythm or other life-threatening complications.

“It imitates other cardiac diseases we recognize, such as myocarditis, an inflammation of the heart typically caused by infectious pathogens,” says Gaur. “Is it the overwhelming inflammation that’s causing the problems in the heart? That’s our thinking now, but we are still learning so much about this disease.”

With Tyona’s heart barely beating and able to pump oxygenated blood throughout the body, Gaur and others knew other organ systems would soon shut down from lack of oxygenation. Pediatric hospital medicine specialist Alia Irshad has seen enough of these cases to know time to appropriate treatment is of the essence.

“Unfortunately, one of the most striking and scary things we see with these patients is how quickly they can deteriorate — they can turn on a dime,” says Irshad. “They show up in the ED with fevers and GI complaints, get admitted, and within a few hours you see their heart rate shoot up, blood pressure drop, a high fever, and they have to go to the ICU very rapidly.”

At the same time, Irshad adds, the spectrum of symptoms is vast as well as fast with conjunctivitis, diffused belly pain, rashes, nausea and vomiting. A number of disorders may be considered and, in some cases, patients have been evaluated for appendicitis before having their diagnosis of MIS-C confirmed.

“With so much COVID-19 out there, we have also kept MIS-C in front of us,” says Irshad. “Have we thought through this enough? Is this on our differential of possible diagnoses? We are getting testing for the virus done earlier on, which has been helpful.”

Through the team’s experience, Tyona’s diagnosis and care was in ways already well thought out. Following the treatment protocol they had formed and tailored through twice-weekly multidisciplinary conference calls and managing other patients with MIS-C over the past several months, team members knew their first goal was to quickly calm the inflammation in Tyona’s body. Immunoglobulin antibody therapy was administered to decrease the antibody effect of the cytokine storm occurring in Tyona, along with medications to sustain her heart and supportive care for respiratory problems and other issues like dehydration. If Tyona had appeared septic, she would have received antibiotics as well.

“We’ve learned a lot about MIS-C from each other,” says Gaur, “and have developed a shared view of how we’re going to proceed with treatment, which has overall been very effective in our experience.”

The treatment approach, says Irshad, led to a “remarkable recovery” for Tyona, but one that was not complete at the end of her nine-day rollercoaster stay in the PICU.

“She was still not at 100%,” says Irshad. “Part of that was her heart function, which had not yet fully recovered.”

The team was also concerned about some lingering neurologic symptoms, which Tyona’s mom described as “staring spells.” While an EEG (electroencephalogram) reading determined they were not overt seizures, the team could not rule out transient ischemic attacks. Post-discharge neurology follow-up, says Irshad, would be “super important.”

After leaving the PICU, Tyona spent one night on a medical floor in the Children’s Center before being discharged home on Christmas Eve. Since then, the team has been monitoring her closely through follow-up appointments, especially with cardiology and rheumatology.

“We continue to follow these patients because we just don’t know what the long-term effects are,” says Gaur. “We follow them in cardiology, probably longer than any other subspecialty, beyond normalization of their function and reliance on medications to feel comfortable that they are on a good path to recovery.”

Three months out from her PICU stay, Tyona continued to experience some fatigue, shortness of breath, and decreased activity and exercise. That was somewhat expected, explains Ogbu: “She was pretty sick. When you have heart failure that severe, you have a lot of debility in the recovery phase, but overall she’s improved, and her blood work is looking much better.”

Pointing to guidelines and expert consensus for diagnosis and treatment of MIS-C, Gaur adds that pediatricians’ awareness of the signs and symptoms of MIS-C is critical to appropriate referrals to care.

“General pediatricians are on the razor’s edge of decision-making,” says Gaur. “If the child is experiencing fever, a loss of appetite, chest pain or shortness of breath, gastrointestinal issues such as nausea and vomiting or severe abdominal pain, which we’ve seen in the vast majority of patients with MIS-C, they should be directed to a pediatric center where they can get multidisciplinary care.”

We’ve learned a lot about MIS-C from each other and have developed a shared view of how we’re going to proceed with treatment, which has overall been very effective in our experience.” 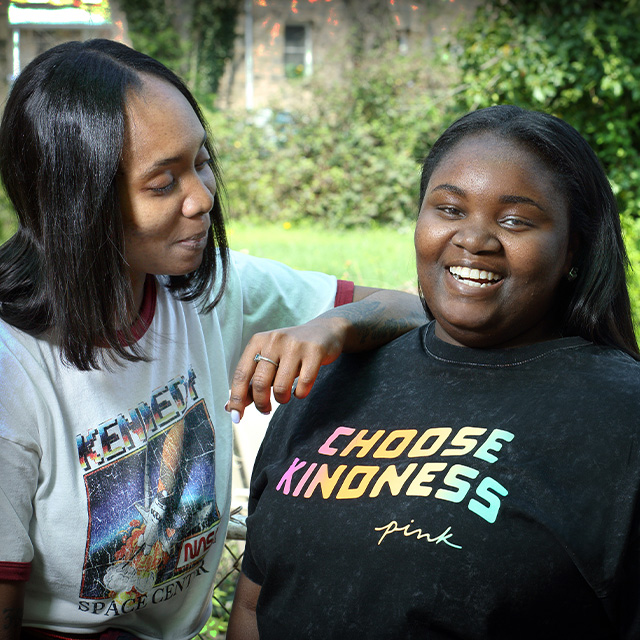 Tyona, at right, with her mom, Kristia Reynolds.
back to top button