Many of Pankaj Jay Pasricha’s patients have been told their severe nausea or stomach pain comes not from their digestive systems, but from their imaginations. Meanwhile, others with virtually identical symptoms have been diagnosed with — and treated for — serious illness.

“I see a lot of very sick people who are misinformed that they’re not really ill by labeling their symptoms as functional,” says Pasricha, director of the Johns Hopkins Center for Neurogastroenterology.

He says one diagnostic method in particular may prevent these patients from obtaining relief: the gastric emptying test, which measures the amount of time it takes for a meal to move from the stomach to the small intestine. Pasricha points out that this test only provides a snapshot of gastric function during a four-hour window. Patients’ ability to move contents from the stomach, however, may change. “It’s common for them to experience slow gastric emptying one day,” he says, “and normal peristalsis a few months later, or vice versa.”

Patients whose stomachs are slow to empty into the small intestine are typically diagnosed with gastroparesis. They’re prescribed medicines to stimulate the stomach muscles, and to quell nausea and vomiting.

But what about patients whose test results are normal despite their chronic nausea and vomiting?

“They’re diagnosed with functional dyspepsia,” says Pasricha. “They could be throwing up or nauseated constantly, but it doesn’t matter. They’re still considered ‘functional’” — a potentially dangerous misnomer, he adds. Up to 10% of the population may have functional dyspepsia, yet there are no approved treatments for this condition.

Pasricha and colleagues on the Gastroparesis Clinical Research Consortium — a panel of experts from academic medical centers across the U.S., brought together by the National Institutes of Health — published an article in the journal Gastroenterology early this year that Pasricha says could change the way physicians treat chronic stomach troubles.

“We wanted to clarify the pathophysiology of so-called functional dyspepsia,” he says, “and compare it to that of gastroparesis.”

The group studied 944 people with chronic upper gastrointestinal symptoms, following each patient’s progress for 48 weeks. Of patients enrolled in the study, 76% were diagnosed with gastroparesis at the outset of their participation.

Near the end, the patients took another gastric emptying test. This time, 42% of patients with an initial gastroparesis diagnosis were reclassified as functionally dyspeptic.

“Their reclassification had nothing to do with the severity of their symptoms,” Pasricha explains. “They just happened to take the test on a day when their results were different.”

However, the researchers found an important clue in full-thickness biopsies of the participants’ stomachs: the absence of cells with the purpose to set the organ’s electrical rhythm and carry signals from the nervous system to the muscles. The biopsies also showed a dramatic reduction in a type of anti-inflammatory macrophage cell.

He says gastroenterologists should listen to their patients and take their chronic nausea seriously, regardless of what a gastric emptying test indicates.

“Let’s stop using the term ‘functional,’” Pasricha urges. “There’s a stigma associated with that word that implies a person isn’t actually sick. These patients have disease that is serious, and it’s very real. Now that we have shown what the pathology is, it’s time to focus on developing new treatments that could reverse this.”

To read more about this research, please visit the Gastroenterology website.

“The striking similarities in patients diagnosed with gastroparesis compared with functional dyspepsia prompted us to reconsider the significance of the gastric emptying test.”
—Jay Pasricha

Gastroenterologist Mouen Khashab has developed an endoscopic procedure that snips the pyloric sphincter to treat certain sufferers of gastroparesis. 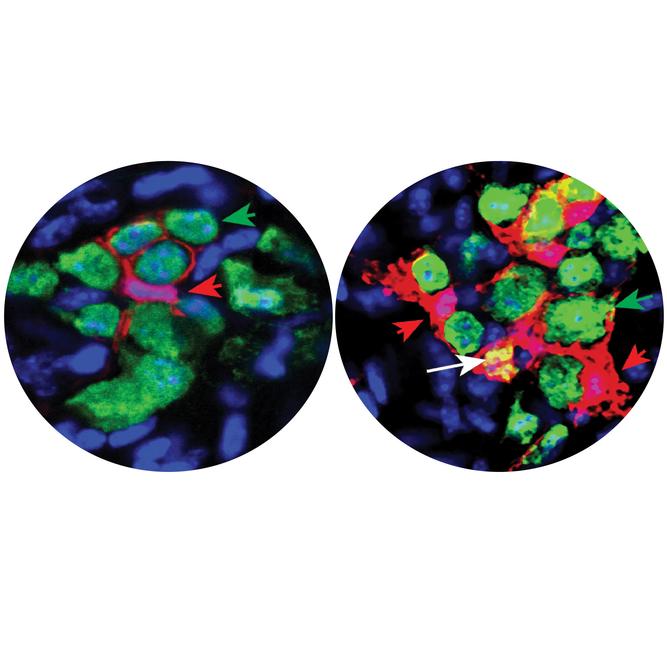 Researchers Discover Death and Rebirth of the Gut Brain

While it was long believed that the enteric nervous system remains static after birth, new Johns Hopkins research shows that the entire neuronal network dies and regenerates every few weeks.
back to top button