What if you could replace the faulty gene that causes cystic fibrosis with a complementary version of that gene that restores its function?

Delivered via a harmless virus, the new gene would get to work providing the instructions for restoring the function of the native protein that regulates the production of mucous, sweat, saliva and digestive enzymes—all the things that cystic fibrosis dangerously disrupts.

Liudmila Cebotaru, whose research at Johns Hopkins includes engineering that gene and the virus to carry it to its destination, never loses sight of her goal.

“We’re looking for a cure for cystic fibrosis,” she says.

Cebotaru says that Americans are living longer with cystic fibrosis. Antibiotics and physical therapy are helping manage the pulmonary problems that plague patients. But eventually, cystic fibrosis takes a dramatic toll on the pancreas, the liver and the intestines. Blocking ducts and poorly managing the body’s water system, the disorder creates enormous—and ultimately fatal—inflammation and infection.

“It’s a genetic defect,” says Cebotaru, “so the only way to cure it is by fixing that gene.”

Because cystic fibrosis stems from a mutation in a single gene, Cebotaru calls it a good candidate for gene therapy. She and her Johns Hopkins lab team have spent the past 10 years engineering a new gene to correct the mutation that causes roughly 70 percent of all cystic fibrosis cases.

“A lot of that time was spent searching for the gene flaw,” she says. “It took years to find it.”

Once they identified how the gene’s mutations affected its protein function, Cebotaru and her research team engineered a virus to carry the gene to the tissue affected by cystic fibrosis.

With the FDA watching closely, Cebotaru’s work has shown enormous promise in animal models and it has great potential in humans, she says. After clearing a few more regulatory hurdles, Cebotaru expects the cystic fibrosis gene therapy will go to clinical trial.

Because the lungs are the first organs to be affected by cystic fibrosis, Cebotaru says the first gene therapy will be delivered to the lungs. “We’re also working on gene therapy for the pancreas and the liver,” she says. “The gene is the same for those organs, but the viral vector is different.”

In her genetics work with cystic fibrosis, Cebotaru is also trying to solve another mystery that has long puzzled researchers. “For patients with cystic fibrosis to survive, they need a lot of antibiotics,” she says. “And many patients who take a lot of antibiotics develop imbalances in gut bacteria, leading to Clostridium difficile infection and dangerous diarrhea.”

One would expect such antibiotic regimens to wreak havoc on the gut flora of patients with cystic fibrosis. But for reasons yet unknown, says Cebotaru, when many cystic fibrosis patients get C.diff imbalance, they do not get diarrhea.

“I’m trying to find out why,” she says. “It could teach us a lot about a problem that causes a lot of people to die around the world.”

“A lot of time was spent searching for the gene flaw. It took years to find it.” 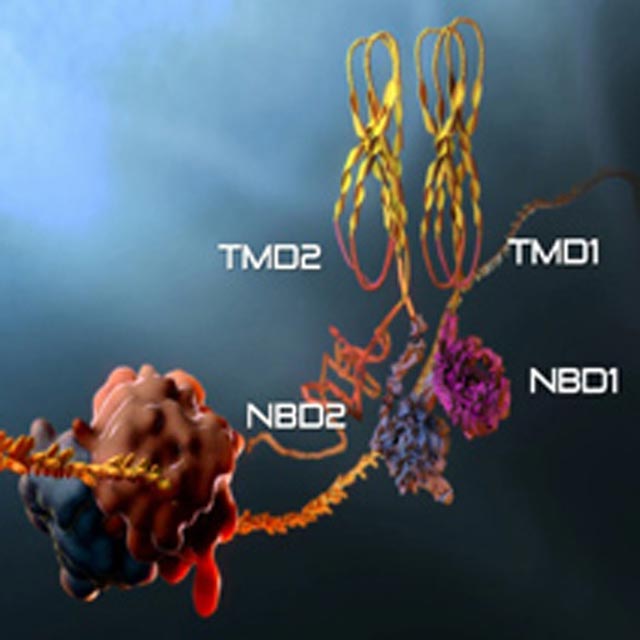 A string of amino acids emerges from the protein complex in the CFTR gene, whose mutation causes cystic fibrosis. Courtesy of the Cystic Fibrosis Foundation.
back to top button