June is National Scoliosis Awareness Month. And for Jennie Burke and her 16-year-old-daughter, Holly, it is a time for celebration.

Eighteen months ago, on New Year’s Eve 2020, Holly had surgery at Johns Hopkins Children’s Center to straighten her spine. She had a severe case of scoliosis, a sideways S- or C-shaped curve of the spinal column. In cases like Holly’s, scoliosis can cause debilitating pain and deformity, and it can even affect the function of the lungs and other internal organs.

“I was terrified by the idea of Holly having spinal surgery, and we did everything we could to avoid it,” says Jennie Burke. “But we are so glad we made the decision to finally go ahead. The curve in her spine is gone, and Holly is back to functioning completely normally. The other day, she was at the pool doing back flips off the diving board.”

Burke says she advises other parents facing a scoliosis diagnosis to find the best possible doctor and to network with other parents to share information — and their fears. “Holly’s surgeon, Dr. Sponseller, and the entire team at Hopkins were amazing,” she says. “I can’t imagine better care.”

Paul Sponseller, director of the Johns Hopkins Division of Pediatric Orthopedics, is an internationally renowned surgeon, teacher and researcher who specializes in scoliosis and other conditions that cause skeletal deformities. “Our goal is to avoid surgery,” he says, “and in most cases, we can and do.” In fact, only about 30% of his patients with scoliosis need any treatment at all, he says. And only about 10% need surgery.

The gold standard of nonsurgical treatment is wearing a brace, made by a specialist called an orthotist, to guide the growth of the spine and prevent it from curving further. But despite two years of wearing her brace religiously, doing physical therapy and even visiting a chiropractor — “We left no stone unturned,” says Burke — Holly’s scoliosis kept getting worse. “She was in constant pain and she was embarrassed about how she looked. One shoulder was noticeably higher than the other, her ribs were becoming asymmetrical, and she hated even wearing a tank top.”

Holly’s surgery involved fusing selected vertebrae and stabilizing her spine with metal rods and bone grafts taken from her ribs. In the months of recovery that followed, Holly received lots of support at home. “We have a big family, and everybody helped,” says Burke, a writer, teacher and mother of four.

Burke says it took a while for the rest of Holly’s body to “catch up with her spine,” for her head and shoulders and hips to align with her new straight torso.

But Holly, a gifted athlete who pre-surgery had been forced to give up her beloved lacrosse and even found it painful to swim, was soon swimming competitively again. And just five months after surgery, she took a summer job playing a pirate — and engaging in water cannon battles — on a ship offering adventure cruises for kids on the Chesapeake Bay. “She is unstoppable,” Burke says.

For her prom, Holly insisted on a backless dress, showing off the thin scar that runs the length of her now very straight spine. “For Holly, it’s a badge of honor,” says Burke. “She is both grateful and proud.” 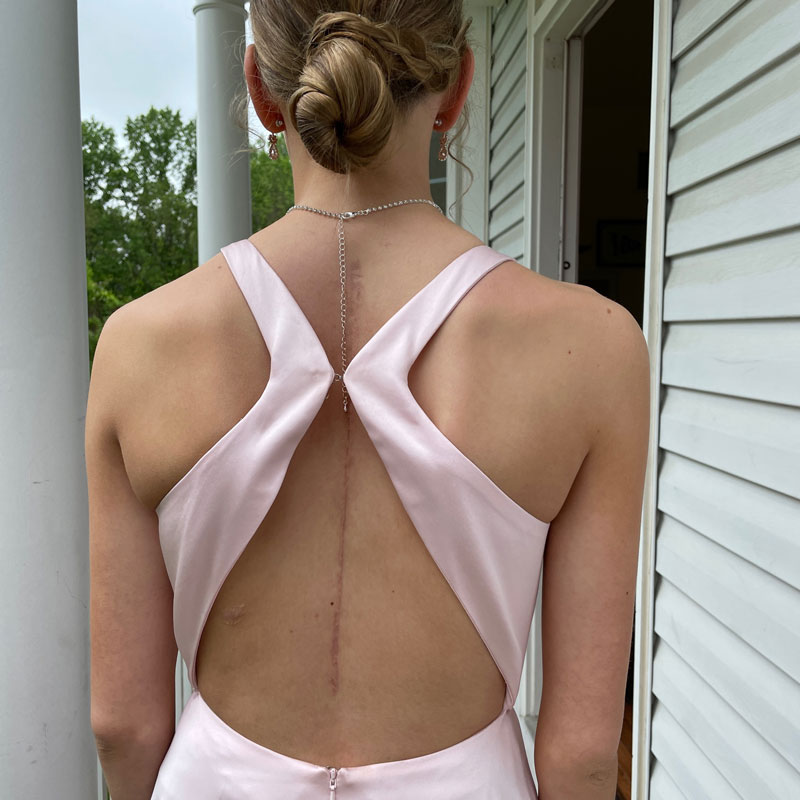 Post surgery, Holly Burke shows off her thin scar, which she considers "a badge of honor," her mother says.

Kristen Venuti, a nurse practitioner and spine care expert who helped care for Holly and who has worked with Sponseller for more than 20 years, is passionate about the importance of early screening for scoliosis. The condition affects an estimated 2% to 3% of the U.S. population, and can occur at any age. But the most common form, idiopathic scoliosis (meaning no one knows its cause), is most often detected between the ages of 10 and 15. And if the curve is caught early, a custom brace and/or physical therapy regimen can usually keep it from getting worse while the child is still growing.

“All parents should know the word ‘scoliosis,’ know how to look for it, and know that every child is at risk of developing it,” Venuti says. “Children should be screened annually by their pediatricians during wellness visits, beginning at age 10. Parents can screen their children for scoliosis, too, by having their child bend forward, with knees straight and fingers reaching for toes, while looking for any asymmetry of the ribs, shoulder blades and waist. Catching it early is key.”

Jennie Burke wants parents to also know there is reason for optimism even in advanced cases. “I was a skeptic, but for Holly, surgery was the answer,” she says. “We were fortunate to have the best possible surgeon and the best possible medical team, and we couldn’t be happier with the outcome.”