During a long career in journalism, Alfred Friendly Jr. traveled the world, working for Newsweek in Rome and Moscow and for the New York Times in Indonesia, West Africa, Italy and the Balkans. He also wrote speeches for members of Congress and a former president of the World Bank in Washington.

In the fall of 2011 the retired Friendly was diagnosed with stage 1 cancer of the larynx. Commonly called a voice box, the hollow organ is involved in breathing, producing sound and protecting the windpipe from food and drink. Doctors in Washington used radiation to treat the cancer, but by the following spring Friendly was experiencing throat and ear pain and sought a second opinion at Johns Hopkins, where he was introduced to head and neck surgeon Christine Gourin.

Gourin found the cancer had recurred and was now stage II. “Unfortunately, when radiation hasn’t worked, you can’t get a meaningful dose of more radiation, so the only curative option is then surgery,” she says. Gourin was able to perform a partial laryngectomy, a procedure to remove all of the larynx except for the vocal cords, sparing Friendly’s voice. He then worked with speech language pathologist Donna Tippett to relearn how to swallow.

While Friendly initially did well, a few months later he developed exercise intolerance and shortness of breath. When Gourin examined him, she noticed his vocal cords had started to scar. “While he still had a good voice, he couldn’t open up the vocal cords as widely when taking deep breaths of air,” she says.

Gourin then recommended a tracheal cannula. It allowed her to create an opening in Friendly’s airway that is covered by just a small, soft plastic tube in his neck. Since that December 2012 procedure, Friendly has remained cancer-free. He maintains an active lifestyle playing tennis, traveling and walking his dog, Millie, and recently celebrated his 80th birthday.

In gratitude, Friendly and his wife have made donations to the Department of Otolaryngology–Head and Neck Surgery in support of Gourin’s research, which seeks to improve quality of health care for patients with head and neck cancers.

“She has been educating me and others on the value of trying to assess quality of care as a measure of successful medical practice, and I thought that made a lot of sense,” says Friendly, whose father died in 1983 after unsuccessful treatment for throat cancer. “It seemed like a very interesting field that probably didn’t get enough attention.”

The gifts have been critical at a time when there are fewer research dollars available, says Gourin. She recently watched a YouTube video of Friendly addressing a group of journalism fellows at American University: “It nearly brought me to tears because for him, retaining his voice was so important. I’m just so thrilled that this worked out for him.”

[Dr. Gourin] has been educating me and others on the value of trying to assess quality of care as a measure of successful medical practice, and

I thought that made a lot of sense.

Saving a Life, and a Voice 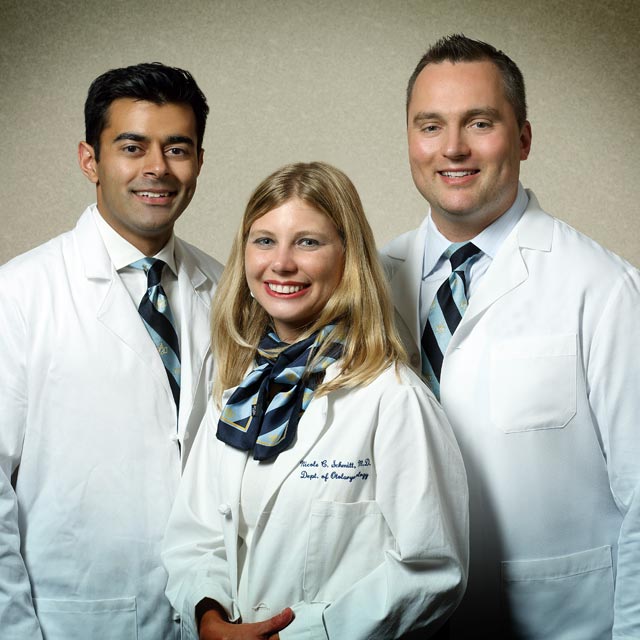 The department welcomes new six surgeons operating at Suburban Hospital and The Johns Hopkins Hospital.
back to top button