As Ruth Carroll crossed a Starbucks parking lot in the summer of 2015, she suddenly tripped on a piece of asphalt and dropped to the ground like a felled tree. She was unable to break her fall because she stiffened up and couldn’t move her hands and arms. Fortunately, her only injuries were patches of road rash on her arms and legs.

But that was just the beginning, the middle-aged athletic trainer and resident of New Braunfels, Texas, recalls. Every few weeks thereafter, Carroll would visit the emergency department for cuts and bruises on her face and head that resulted from similarly inexplicable episodes.

Over the next two years, Carroll received seven different diagnoses — including tonic seizures (sudden muscle stiffening) and progressive supranuclear palsy (damage to the cells in the brain that control movement) — before learning she might have a condition called stiff person syndrome (SPS).

SPS is an autoimmune neurological disorder that most often causes muscles in the torso and limbs to become rigid and/or spasm. Sometimes triggered by emotional stress or by environmental stimuli, such as abrupt loud noises, the spasms can be so severe that they cause the person to fall down. The muscles may relax within seconds or may be stiff for hours.

While the cause of this extremely rare disease is unknown, research indicates that SPS is the result of an autoimmune response gone awry in the brain and spinal cord.

As Carroll researched the condition, she found a video featuring Johns Hopkins neurologist Scott Newsome. An expert on disorders of the central nervous system caused by the immune system, Newsome is director of the Johns Hopkins Stiff Person Syndrome Center, one of the world’s best treatment centers for SPS. The physician says the condition is estimated to affect one to two people in a million — mostly women — and commonly strikes people who are already living with autoimmune disorders such as type 1 diabetes.

“Even though SPS is rare, it is likely more common than what is reported,” says Newsome. “SPS can be considered a spectrum disorder, and is often misdiagnosed due to its varied presentations.”

Carroll listened carefully as Newsome described the diagnosis process, which may include blood tests, medical imaging and electromyography, and the treatment options. She had her first appointment in 2017.

Treatment for SPS at the Johns Hopkins Stiff Person Syndrome Center is tailored to each patient and includes a combination of medications, non-medication interventions and lifestyle modifications, says Newsome, who also directs the Neurosciences Consultation and Infusion Center at Johns Hopkins Health Care & Surgery Center — Green Spring Station. The medications typically include muscle relaxers and therapies that target the immune system, such as intravenous immunoglobulin. Some of the non-medication interventions include stretching, yoga, using a heating pad, keeping mobile and getting adequate rest.

“When I got to Dr. Newsome, he started the treatment aggressively and I loved it,” says Carroll, who now takes several medications on a daily basis including muscle relaxers three times a day, has intravenous infusions twice a month, and receives Botox injections every three months in her legs, hips, neck and back. She also stretches daily, aims to get enough sleep and eliminates caffeine from her diet. Recently, she started participating in cognitive group therapy to see if it can help improve her symptoms.

Carroll did not have any falls in 2021, and while she can walk, she often uses a wheelchair that she pushes with her feet because it makes her feel more secure.

Clinic Follows More People with SPS Than Anywhere Else

Newsome has been caring for patients with SPS since 2009, which is around the time he joined the neurology faculty within the Johns Hopkins Division of Neuroimmunology and Neurological Infections.

“Back then, I could count on my two hands how many SPS patients there were at Hopkins,” says the neurologist, who is also co-director of the Johns Hopkins Neuroimmunology Clinical Fellowship Program. “Now our center follows more than 200 people, which is more than any other place in the world.” (Although the incidence of SPS in children is exceedingly rare, Newsome says he has seen about a dozen cases.)

With access to 15 years of longitudinal data on the largest group of people with SPS, he and his colleagues are working to describe the full spectrum of SPS and its range of characteristics, including clinical remission. “The people we categorize as being in remission are those who are not worsening,” says Newsome. “Most people require a combination of medications and non-medication interventions. Although people being treated for SPS continue to experience daily challenges, many are not having new ones, and their quality of life is better overall.”

The neurologist finds SPS can cause a range of stiffness — from full-body rigidity to stiffness in only the arms, legs or torso. Likewise, the spasms caused by SPS can be periodic and quick or last several hours. Symptoms come without warning, but seem to be triggered by stimulation such as being startled or excited; cold temperatures and exhaustion appear to exacerbate them.

Carroll says the rigidity and muscle spasms are unpredictable for her. “Every time I fell, I didn’t know it was coming. Every limb completely stiffens and I can’t talk. I’ll usually grunt because that’s all I can do to signal I am falling.”

The longest episode of stiffness Carroll has experienced is three minutes. She is almost always able to sit up and use her arms and legs right after she falls. Similarly, the spasms that initiate uncontrolled jerky movements from her cheeks to her calves typically end as quickly as they begin. When she has spasms in bed at night, she says it feels like her body literally jumps up from the mattress. Other times, she is so stiff that she asks her husband to help her roll over.

Because she can’t predict what might happen at any given moment, Carroll spends more time than she likes in her home, where she has protections in place if she has a spasm or stiffens. Two years ago, she stopped driving because she didn’t want to risk having an episode behind the wheel. When she goes somewhere, she always has someone accompany her.

“I’m interested in trying to uncover what the underpinnings of this condition are immunologically, but also understanding the disruption it causes in daily living,” Newsome says. “SPS is one of the most disabling conditions that I’ve seen.”

At the 2021 American Academy of Neurology meeting, Newsome and his team presented their latest research based on retrospective reviews of the medical records of patients with SPS. They found depression and anxiety were common in patients with SPS, along with cognitive impairment, and they identified that starting immunotherapy early in the treatment of SPS may improve patient outcomes.

Even though there is no cure, Newsome believes the situation for people with SPS is improving because the condition is more widely recognized. “A lot of the patients I see now are folks who are already diagnosed and are coming to me for a second opinion,” he says. “People are getting diagnosed earlier and treated earlier, and that is exactly what we want to happen.”

“Although people being treated for SPS continue to experience daily challenges, many are not having new ones, and their quality of life is better overall.”

Stiff Person Syndrome Over the Years

First described by neurologists Frederick Moersch and Henry Woltman in a 1956 report, stiff person syndrome (SPS) occurs mostly in women around the age of 50.

Because of its similarities to multiple sclerosis, a disease in which the body attacks itself by mistake, researchers suspect SPS results from an abnormal autoimmune response in the brain and spinal cord. The exact cause is unknown. What is known is that most people with SPS have high levels of antibodies in their blood that attack glutamic acid decarboxylase (GAD), an enzyme that produces a substance that controls muscle movement. It is also known that people diagnosed with SPS frequently have coexisting autoimmune disorders like type 1 diabetes or thyroid disease.

Learn more about the strategic priority to Push the Boundaries of Science and Education.

Johns Hopkins sees more patients with this rare disease than any other medical center in the world.

A Confrontation with Uncertainty in Multiple Sclerosis

Patients with multiple sclerosis may present as anxious or depressed due to the uncertainty of living with the disease. 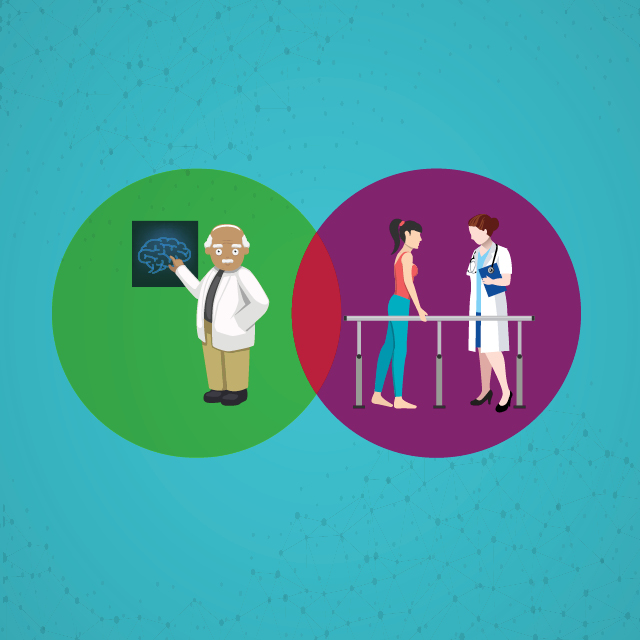 Care for MS patients involves coordinating between all their providers, including rehabilitation, for the best outcomes.
back to top button