After a seemingly normal prenatal period, followed by an uneventful delivery at The Johns Hopkins Hospital, Loudon “LJ” Fuhrman thrived for his first two weeks of life. Then, LJ’s mother, Alena, noticed that he was breathing fast when she was holding him one night. A pediatric nurse at Johns Hopkins, Alena counted a respiratory rate of over 60 breaths per minute, abnormally high for a newborn. Just as quickly, his breathing resumed a normal rate but accelerated again the next day. Alarmed, Alena rushed LJ to his pediatrician, who measured 94 breaths per minute and started to call for an ambulance. Alena said she could get him to the hospital quicker. By the time LJ arrived in the Emergency Department (ED), his breathing had again returned to the normal range. After monitoring him for three hours, emergency medicine physicians noted that LJ looked well and showed no signs of fever. They had no answers for the episodic rapid breathing.

“I hated to open a can of worms so we went home and he started looking better,” says Alena. “It was summer, it was hot, so maybe the heat had something to do with his breathing. Then it started again.”

And again and again with no explanation after three ED visits, echocardiography and electrocardiogram tests, among others. The conclusion of the assessments seemed to be this episodic rapid breathing was something weird that would resolve itself for this otherwise healthy baby. His only other remarkable symptom was a small red spot on his chest, suspected in the ED to be associated with a hemangioma. Mystified but determined to find an answer, Alena took LJ to pediatric pulmonologist Jessica Rice.

Initially, Rice was equally puzzled, though she thought interstitial lung disease a possible perpetrator. A CT scan, Rice said, could rule it out. Meanwhile, Rice could not stop thinking about the small red spot above LJ’s sternum, which Alena said had become more pronounced. To Rice, it did not look like a hemangioma. Could it be a sign of something systemic beneath the skin, she wondered, an arterial venous malformation, for instance, in LJ’s lung? For answers, Rice ordered a CT scan and referred LJ to pediatric dermatologist Bernard Cohen.

Noting the inflamed spot on LJ’s chest, now a firm dome-shaped nodule, Cohen strongly suspected it to be a xanthogranuloma lesion associated with a rare type of hematological disorder called histiocytosis, which affects two in 200,000 people each year. In Cohen’s experience, these skin lesions commonly flatten and disappear in a month or two, leaving a little dimple scar behind. If the patient is also experiencing other unexplained symptoms such as rapid breathing, however, this skin lesion could signal a more serious systemic form of histiocytosis presenting throughout the body.

Rice was on the same wavelength, recalling a recent Grand Rounds presentation by Johns Hopkins pediatric oncologist Elias Zambidis on histiocytosis. Indeed, she learned, a patient could have pulmonary symptoms associated with a lesion on the skin. Cohen’s diagnosis of xanthogranuloma and the CT scan, which showed innumerable nodules in LJ’s lungs, were illuminating.

“Dr. Cohen’s diagnosis of dermal histiocytoma was important,” says Rice. “The CT scan a day later revealed diffuse nodules in his lungs, which is extremely abnormal. Could this be a case of juvenile xanthogranuloma?”

For the answer, Rice reached out to Zambidis, one of only a handful of experts in the country on histiocytosis, which sometimes behaves like a cancer. He explained that juvenile xanthogranuloma (JXG) is a rare histiocytosis that is usually benign and limited to the skin of the head, neck and trunk. Though less common, JXG may also involve the lung, liver, adrenal gland, appendix, central nervous system, kidney, heart, intestines and spleen. Biopsies of the lesions in LJ’s lungs and chest would confirm LJ’s type of histiocytosis. As suspected, they were positive for JXG.

Zambidis then ordered more tests, including a full body scan, which revealed lesions in LJ’s brain and spinal cord. The good news was that in most cases of JXG these internal lesions, like the skin lesions, are benign and self-resolve over time. To be certain the lesions did not contain more aggressive mutations and an even rarer form of histiocytosis, Zambidis also recommended a personalized genetic analysis of LJ’s lung nodules. His instincts were right as genetic sequencing results revealed the ALK mutation found in lung cancers.

“We don’t know how aggressive this ALK form of histiocytosis is, but it’s very rare with only three documented cases,” says Zambidis. “Understanding the genetics of these tumors may teach us not only about this rare form of JXG, but help us understand other types of cancers, as well.”

Treatment for LJ included Cladribine, or 2-CDA, a leukemia drug found to have potency against the dendritic white blood cells that cause JXG. While the tumor on LJ’s spinal cord would likely subside without any treatment, Zambidis was concerned.

“Some people say watch and leave these tumors alone,” says Zambidis. “The reason I did not in this case was because it was clearly impinging on the central nervous system, the lumbar spinal cord. Even benign tumors can cause damage.”

With treatment, LJ’s tumors “have shrunk to almost nothing,” says Alena. “His immune system is not great but his appetite is good and his growth and development are on track.”

Alena adds, “I want to raise awareness of histiocytosis for other parents so they don’t feel alone or bad about being an advocate for their child with this rare disorder.”

“This case makes you think about other patients who are well-appearing,” says Rice. “If the mom tells you her child has been breathing fast intermittently, even if he’s not breathing fast when you see him, you have to use that as part of your workup. You have to have a high index of suspicion for something else going on.”

Adds Zambidis, “If there are other patients out there, we want them to come here to get worked up so we can learn about them, sequence their DNA and figure out what its natural history will be. If we can catch it early, we can treat it more effectively.” 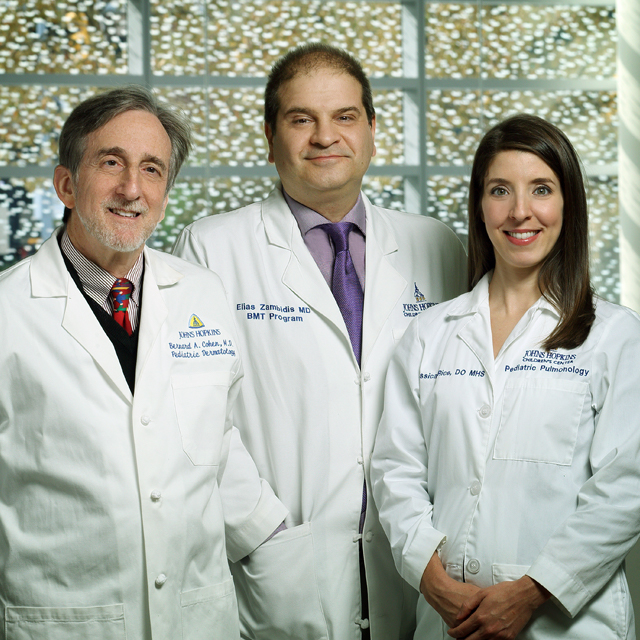