At 94, Doris Russell has a workout routine that puts to shame most people half her age. She swims laps three times a week and competes annually in the Maryland Senior Olympics and YMCA Nationals. But three years ago, Russell had a series of transient ischemic attacks. Because these mini-strokes are forerunners of full-blown ischemic stroke, they could not only derail Russell’s workouts but also precipitate devastating neurologic injury. So when the spry nonagenarian ended up in the office of Johns Hopkins vascular surgeon Bruce Perler, the decision to proceed with carotid endarterectomy was a no-brainer.

“Strokes are particularly debilitating in the elderly due to their lower physiologic reserve, but also because the aging brain tends to have preexisting microvascular damage, so the effects of a stroke can be more extensive and clinically severe,” Perler says.

Russell is among a growing number of people over 70 who undergo both therapeutic and preventive carotid endarterectomies. In fact, about 40 percent of the nearly 2,000 carotid patients Perler has operated on are in their 70s, 80s and 90s. Performing carotid surgery among elderly patients with symptomatic disease — marked by TIAs and notable carotid occlusion — is not controversial, Perler says.

“Between 30 and 40 percent of people who have a mini stroke go on to have a full-blown stroke,” Perler says. “Doing nothing poses a grave risk.”

However, performing surgery for asymptomatic disease in this advanced-age group remains debatable because the risk-benefit ratio is less clear. Yet, Perler says, when done correctly, the procedure — gently peeling away the calcified atherosclerotic plaque from the arterial wall — is both safe and justified.

Older symptom-free patients with substantial carotid occlusion — 80 to 90 percent or more — stand to benefit from preemptive surgery because the risk of full-blown stroke looms large.

Perler cites the case of a 90-year-old man who initially presented with 90 percent stenosis of the right carotid and opted for medical therapy and watchful observation. Six years later, his right carotid, by then completely occluded, was no longer operable, and he’d developed 95 percent blockage in his left carotid. That finding moved the needle. The patient went ahead with a left carotid endarterectomy, becoming Perler’s — and possibly Johns Hopkins’— oldest endarterectomy patient.

Tailoring intraoperative and postoperative care to the physiologic needs of elderly people can minimize risk and so can careful patient selection, Perler says.

For example, Johns Hopkins anesthesiologists use minimal sedation, and the patient is awake promptly after surgery, which lasts about an hour. Most go home the following day. A careful pre-op exam and ultrasound can pinpoint the occlusion — usually at the carotid bifurcation — and ensure a smaller incision. And since carotid stenosis is fueled chiefly by atherosclerotic plaque, all patients should be on statins, Perler adds, because those who take them fare better overall. “If they are not already on a statin,” he says, “we make sure they start taking one, ideally at least a month before surgery.”

After reviewing outcomes from thousands of cases, researchers at Johns Hopkins report that patients who undergo carotid stenting fare decidedly better if their surgeons do not re-inflate a tiny balloon in the vessel after the mesh stent is in place. 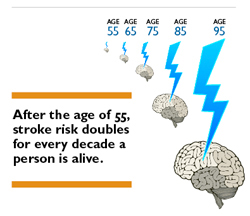