In response to a significant, one-time drop in the number of women residents who matched at Johns Hopkins in 2016 — from about 50 percent to just 20 percent — the Osler Medical Residency Program has undergone a transformation.

Named for Sir William Osler, The Johns Hopkins Hospital’s first physician-in-chief, the program is one of the oldest, and most respected, medical residencies in the nation. It provides three years of comprehensive training in general internal medicine and a variety of experiences in acute and ambulatory medicine for 135 trainees.

During the last three years, Johns Hopkins internists Heather Sateia and Gail Berkenblit have worked to improve the Osler Residency culture in order to recruit and retain women trainees. As associate residency program directors, they provide warm welcomes on interview days, send personal emails before and after interviews, and make sure trainees who express an interest in a specialty are put in touch with a female physician in that field.

The school of medicine now provides more time off for birth recovery and parental leave (12 weeks and four weeks, respectively), as well as increased financial coverage for infertility treatments.

These initiatives may have contributed to a historic change: On Match Day 2018, 62 percent of the residents who matched in the Osler Residency Program were women (in 2019, 54 percent were women). And, over the past several years, more than a dozen residents have started families.

Berkenblit, who serves as director of ambulatory medical education, says she is heartened by this progress. During her own Osler residency in the 1990s, only 30 percent of trainees were women, and she waited until after her residency to have a child.

Another critical source of support is the Task Force on Women’s Academic Careers in Medicine. Established in 1990, the group provides networking, mentorship and sponsorship opportunities, in addition to offering guidance on gender equity around salary, promotion rates, leadership appointments and family-friendly work practices in the Department of Medicine.

Nevertheless, she says barriers persist, “and they can be subtle and unconscious.” Many women report situations where they’re not being heard, she explains: “You might be the only one making a certain comment, and no one says anything until a few minutes later, when a man says basically the same thing and is acknowledged.”

Berkenblit credits Osler residency program director Sanjay Desai with promoting a work-life balance for both women and men. “Sanjay has spent a lot of time looking at rotations and how duty hours align with family and personal time,” she says. “We are still a very rigorous program, but there’s more openness to change … This strategy is really about providing support to help people lead healthy lives and ensure that the program is what every trainee wants it to be.”

At one recent event, Osler alumna Redonda Miller, president of The Johns Hopkins Hospital and mother of two daughters, offered suggestions for women who want to pursue leadership roles. “Let others know about your career aspirations,” Miller said. “And, when opportunities arise, be sure to say yes to new projects and apply for new positions. Push yourself past your comfort zone and toward your goals.” 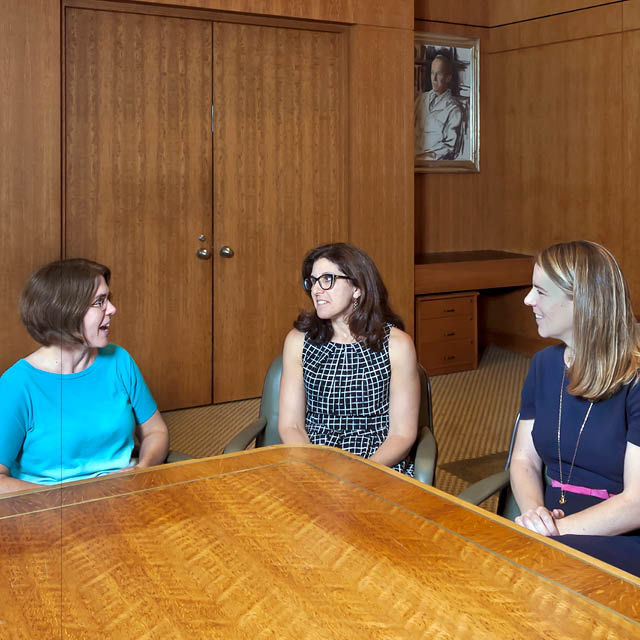 Leaders in the Department of Medicine have taken targeted approach to empowering and recruiting women trainees, with positive results.
back to top button