I’ve been fortunate to have worked at Johns Hopkins over several decades. Before signing on as editor of Hopkins Medicine magazine in 2007, I spent 12 years leading the staff of Johns Hopkins Magazine, the university’s flagship publication.

These years have afforded me a long view that proved particularly illuminating with “Invisible No More,” our story about the improving conditions for the school of medicine’s 1,200 postdoctoral fellows.

When we tackled this same subject back in 1998 in Hopkins Magazine with “The Postdoc’s Plight” (Bit.ly/JHPostDocs1998), the situation for fellows was dismal. Hopkins postdocs received only student level insurance and weren’t eligible for other benefits such as dental, retirement or childcare.

Pay varied wildly (some postdocs were paid next to nothing and most earned under $25,000 annually), some fellows remained stalled in positions for eight or 10 years, and there was little to no formal career training. Sharyl Nass, then co-president of the Johns Hopkins Postdoctoral Association, aptly summed up the situation this way: “We feel like we are not being treated like grown-ups.”

As I reacquainted myself with that earlier article and then dug in to edit our 2021 story, I was gratified to confirm that we aren’t just paying lip service: Life has improved significantly for our postdocs today — and deservedly so.

Credit Where It’s Due

We heard from a number of readers who particularly enjoyed “Pocket Pearls” (Fall 2020), Karen Blum’s story about the history of The Harriet Lane Handbook — the “bible” of pediatrics for trainees. Amid the response, we learned about important contributions made by the late M. Deborah Gordin-Markel, who was the first pharmacist to help edit the handbook’s formulary. She worked on the 9th and 10th editions of the handbook before her untimely death from cholangiocarcinoma in 1988 at the age of 30.

During the 1986–87 academic year, Gordin-Markel had many meetings with handbook section editors to help write, edit and fact-check the formulary, at a time when pharmacist involvement in clinical teams was becoming essential. She lent frequent evenings and weekends to the tasks of correcting and updating the material, and to adding information about new drugs and antibiotics — yet remained behind the scenes as an uncredited contributor.

The online edition of Hopkins Medicine magazine has been updated with this new information and we also thought it important to share it here. 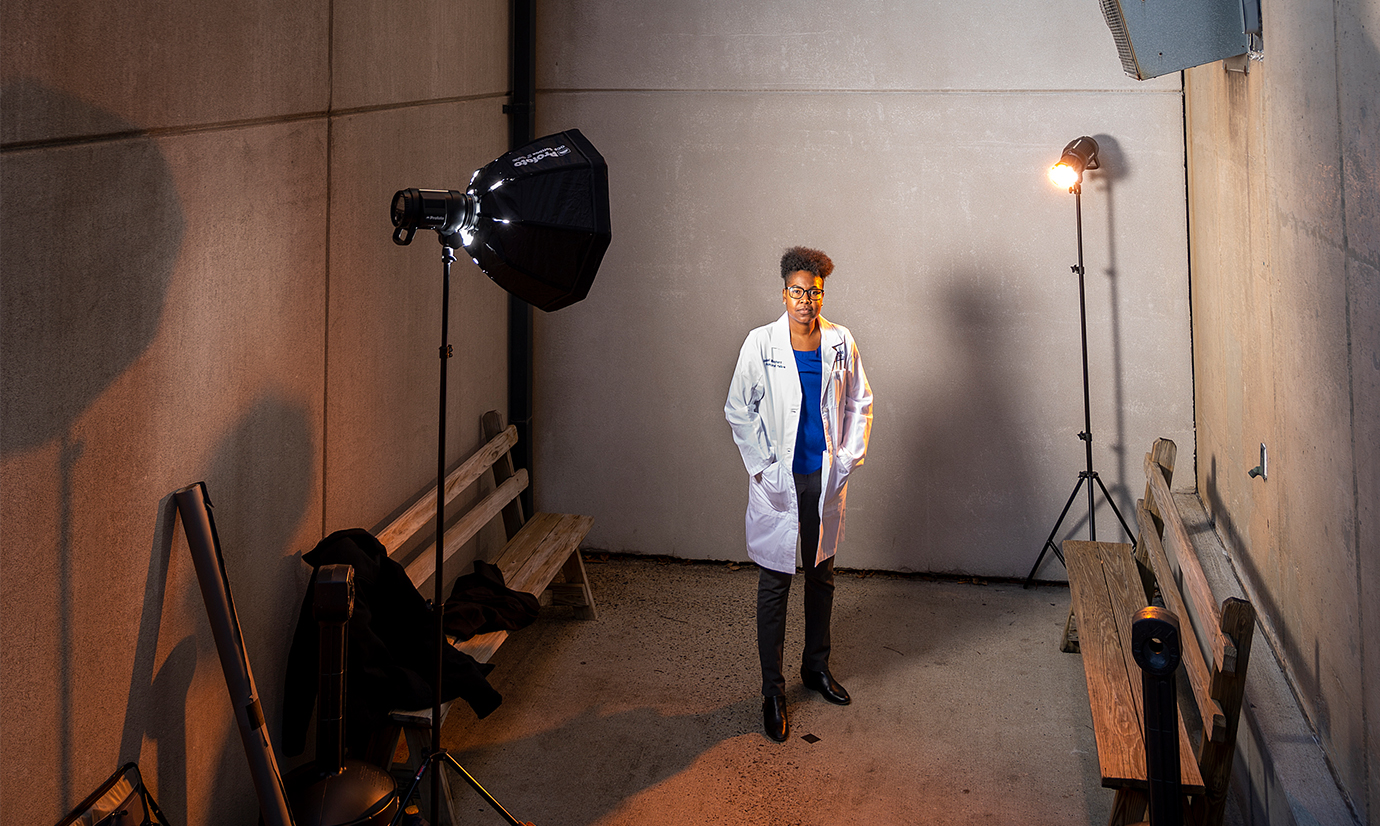 For magazine photographers like Chris Myers, the COVID-19 pandemic has raised significant hurdles.

Eager to find a workaround for “Invisible No More,” our story about the improving situation for the school of medicine’s 1,200 postdoctoral fellows, Myers got creative.

On a cold and windy day in December, he set up his equipment outdoors in a protected alcove near The Johns Hopkins Hospital.

Then postdocs Janielle Maynard and Alex Weiss took turns braving the frigid temps for individual shoots. Once those photos were in the can, a masked Myers headed inside for a series of shots within some empty labs.

Back in his studio, Myers worked some magic … and voila — our lab scene showing Maynard and Weiss standing “together.”