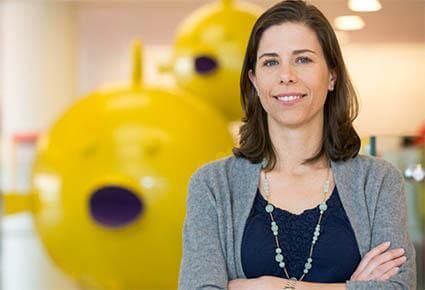 Sara Johnson wonders what kinds of experiences in utero might affect behavior, learning and the response to stress in an individual after birth.

“Experiences powerfully shape who we become,” says the assistant professor of General Pediatrics and Adolescent Medicine at the Johns Hopkins Children’s Center, “even those of our parents.’”

Johnson is working to understand how social experiences–whether family relations, life events or neighborhood characteristics–shape the biology of child development, including behavior. Does fetal exposure, too, to a mother’s high level of long term stress or unrelenting adversity affect self-regulatory development in childhood, in adolescence and over a lifetime?

In studies at the Johns Hopkins Children’s Center in Baltimore and in one proposed at All Children’s Hospital Johns Hopkins Medicine in St. Petersburg, Fl., Johnson and her colleague Janet DiPietro at the Johns Hopkins Bloomberg School of Public Health are studying such correlation and causation. They are identifying stressors in the lives of pregnant women, and then, using fetal actocardiograph, which tracks fetal heart rate and movement, to monitor the fetus’s neurological and behavioral development. “We want to know how their brains are developing,” says Johnson, “and what sorts of exposures have the biggest effects.”

They are re-examining these children at the age of 5 to see how experiences in utero shape behavioral development, as well as health conditions like asthma and obesity, which are traced to stress. A better understanding of biological influences on behavior could one day lead to preventive measures, both in pregnant women and childhood, to foster better regulatory development, including better impulse control and decision-making. “Does a fetus get the message, by exposure to a mother’s stress, that their world will be a harsh place, and that they should accordingly develop more quickly, more hastily?” Johnson asks.

The answer, she continues, could lead to a new emphasis on reducing in-utero exposure to certain chronic stressors that keep the body’s stress response turned on, as well as disease prevention. For example, Johnson says, asthma, the most common chronic childhood disease, is influenced by a complex interplay of inflammation, immunity and the body’s stress response. So, could asthma be prevented by predicting which babies are the most susceptible and intervening early, before birth?

“I think we’re in the dawn of a new era in which we can,” says Johnson. “We’re in the era of epigenetics, of understanding and mitigating the impact of a child’s environment on his genes, and eventually his or her health in adulthood.”

An era that philanthropy will usher in, says Johns Hopkins Children’s Center Director George Dover. “Philanthropy is critical to sustain studies like Sara’s that will enable us increasingly to prevent early in life many of the chronic illnesses that strike in childhood and beyond.”

Johnson, pictured above, received her Ph.D., M.P.H. in public health from the Johns Hopkins Bloomberg School of Public Health, where she holds a joint appointment in Population Health.

To learn how you can become involved with our philanthropic effort and further studies like Dr. Johnson’s, contact the Office of Development, 410-361-6493.