Radiation oncologist Lawrence Kleinberg understands the gravity of the cancer he specializes in treating. The brain tumor expert knows there is not only functional consequences of treatment, including loss of vision or use of arms or legs, but there is also a certain sanctity when it comes to the brain. It is what makes us truly human, the keeper of our personality, thoughts and memories. The world’s greatest supercomputer makes the connections for essentially every bodily process and function. When cancer and benign tumors infiltrate the brain, the consequences of treatment can often be as dire as the diagnosis.

“The type of damage that can be caused by radiation therapy depends on where in brain the tumor is located,” says Kleinberg. It could affect almost any function—strength of an arm or leg, memory function, or even vision. Almost anything the brain controls could be affected.”

As a result, Kleinberg is excited about the opportunities to explore the great promise of proton therapy for protecting the brain from these the side effects.

The patients most likely to benefit, he says, are those with brain tumors classified as low grade because they are slow growing, limited to a specific area of the brain, highly treatable and often curable. These characteristics make them good candidates for treatment with radiation, including proton therapy. These characteristics also distinguish low-grade tumors from their highly malignant and aggressive counterpart that reach throughout the brain. Whether the precision of the proton beam will benefit patients with these types of brain tumors is more uncertain and will require extensive research studies.

“The problem with highly malignant tumors is that what we are treating on purpose is mixed in with the normal brain,” says Kleinberg.

Low grade tumors, such as meningiomas (a benign tumor that forms on membranes that cover the brain and spinal cord just inside the skull) and pilocytic astrocytomas (a slow growing type of glioma brain tumor that originates from star-shaped cells called astrocytes) are more confined to a specific area of the brain.

Proton therapy will probably not be any better at controlling the tumor, but it may do better job of protecting normal brain cells surrounding the tumor from injury.

Comparing proton treatment to photon therapies will be one area of research in the Johns Hopkins Proton Therapy Center.

The studies will be very different for the adult patients Kleinberg treats than pediatric patients. “We know for certain that there are toxicities for pediatric patients whose brains are still developing, but we don’t know yet the extent of these toxicities in adult patients whose brains are already formed. We will only learn this by doing research studies that compare proton therapy to other types of radiation treatment,” says Kleinberg.

“We have expertise in all of these options, and this is important because proton may be better in some situations, and in other instances, we may want to give big bursts of radiation over a shorter period of time, and in that case, other types of treatment may protect the brain better. It’s very individualized, ” says Kleinberg. “

Like proton therapy, some of our other radiation treatment devices also have tumor tracking to make sure the radiation beam stays fixed to the tumor, even if the patient moves. This is even more vital for brain tumors, Kleinberg explains, where toxicities to normal brain can have life-altering consequences. Comparing the tumor tracking in proton verses other types of radiation treatment, such as Cyberknife, is another focus of research in the proton therapy center.

The ability of the proton beam to stop at the tumor makes it the preferable option for patients with tumors that sit on or close to the spine or near other critical structures that need to be shielded from radiation, such as the optic nerve. Kleinberg says proton therapy may also be the best option to preserve fertility in women of child-bearing age who have tumors near the pituitary gland. Whether proton therapy is the best option will be an individualized decision, depending upon the shape and type of tumor.

Its toxicity-limiting precision also provides flexibility to increase doses. With other types of radiation treatment, doctors may decrease the radiation dose to the tumor to protect a vital structure nearby. “Proton therapy in some situations will allow us to give a better therapeutic dose without worrying about damage to nearby structures, and that could improve outcome for some patients,” he says.

Having another tool to consider in treating his patients is a good thing, but he says patients come to the Kimmel Cancer Center because of its reputation for excellence.

“Our patients aren’t just looking for the next new technology. They are much more engaged with our expertise and knowledge, as are the physicians who refer them to us. That is key,” says Kleinberg. “Patients often come a long way and pass a lot of centers to get to us. They do this because we have earned that trust."

Request an appointment
Johns Hopkins' medical concierge services offer complimentary assistance with appointments and travel planning. Request free assistance:
All fields required *
As protons travel through the body, most of the energy is reserved and released where the protons stop in the tumor. Photons, on the other hand, release energy along the entire path they travel. This fundamental difference is what makes proton therapy preferential for certain tumors in the spinal cord and the brain. If vital organs or structures are along the path the radiation travels, protons cause less damage to them. And there is no exit dose. 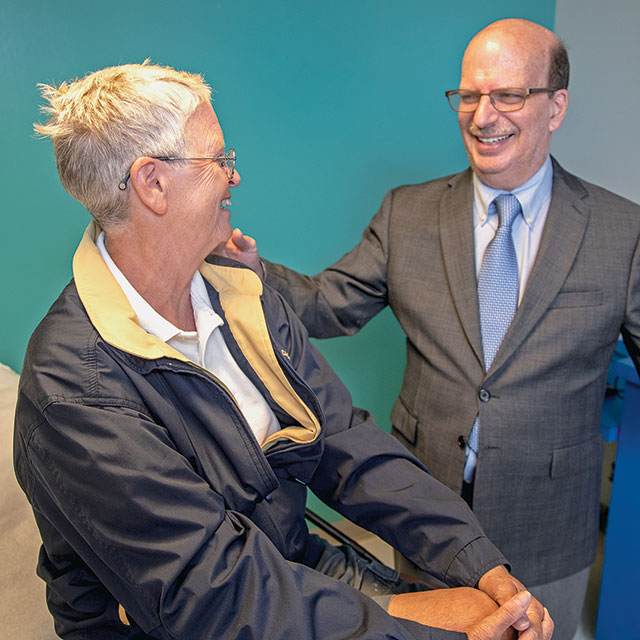 How Jeanie overcame brain cancer.
back to top button