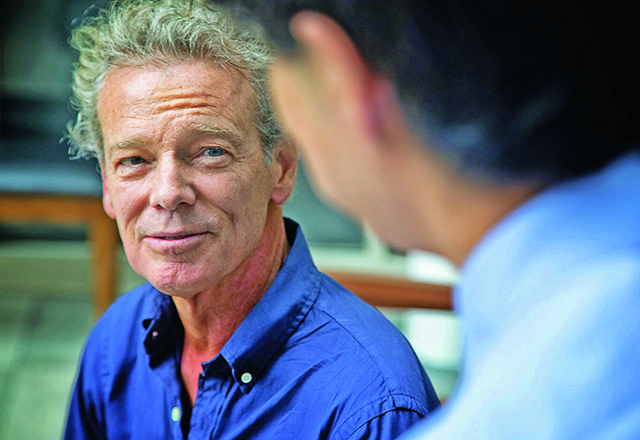 In 2018, a cancerous tumor David had removed from his neck a decade earlier returned.

David’s cancer was classified as HPV-positive, meaning it was caused by the human papillomavirus. Kimmel Cancer Center researchers identified the virus as the driver of certain head and neck cancers in 2007. Their findings marked a distinct subtype of head and neck cancer and one that portended better responses to treatment and very high cure rates.

As an engineer, David looked at things pragmatically and analytically, and he did his research. He consulted with his doctors in Hong Kong, where he’d lived since 1995 and had his first surgery. They told him HPV-positive head and neck cancer was uncommon in Hong Kong. At their suggestion, he began considering treatment back in the U.S., where he often traveled for business. He contacted experts at the National Cancer Institute (NCI) and at several NCI-designated comprehensive cancer centers.

He began receiving a standard regimen of chemotherapy in Hong Kong as he explored radiation therapy options, including proton therapy. David’s oncologist told him he had accepted a position at Johns Hopkins and introduced David to Kimmel Cancer Center radiation oncologist and head and neck cancer expert Harry Quon.

David’s cancer was at the base of his tongue and a saliva-producing gland called the parotid.

“Every person I talked to prepared me for pain and suffering,” says David. “Dr. Quon was different, and that sold me.”

While most cancer experts David consulted considered severe side effects a given, Quon took a different view. “We don’t want you to be in pain. We want you to eat,” Quon told David. His goal was to minimize or eliminate side effects, and David said that made the Kimmel Cancer Center’s approach unique.

At the heart of what sets Quon’s approach from others is a desire to do better for patients, and this resulted in a program called Oncospace he developed with physicist Todd McNutt. Head and neck cancers are considered among the most difficult to treat because they are in close proximity to so many other organs and glands. Damage to the voice box, tongue, throat and salivary glands can make it painful for patients to eat and cause other quality-of-life altering and even life-threatening consequences.

McNutt and Quon developed a complex, computerized data mining system that scrutinizes and analyzes data from prior patients who received radiation treatment to improve the treatment of new patients. It evaluates the therapies that worked best for a particular cancer and learns from those that resulted in less than favorable outcomes to generate an optimal treatment plan. Quon used Oncospace to develop a plan that protected David’s parotid gland from permanent damage.

David says he is grateful to Quon and nurse Marsha Freudigman for focusing on the person and not the cancer. David continued to work and remained active throughout his treatment, exercising and using yoga, reiki and acupuncture to support healing. “After six weeks of radiation therapy, I was eating just like anyone else,” says David. Even better, David’s last scans show no signs of cancer. 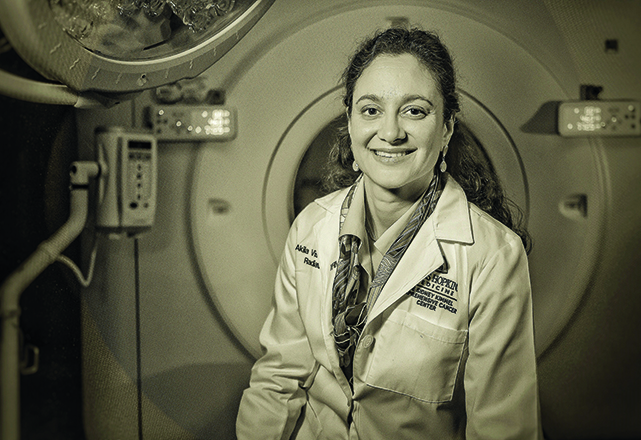 We own all of our machines, so we are not driven by profit to select one machine over others. Patient care—whatever is the best option for the patient—will guide this decision-making.

The Kimmel Cancer Center’s excellence in all areas of radiation therapy makes it possible to offer comparative planning. This means the ability to determine which one of its many radiation treatment tools—proton, photon, CT- and MRI-guided brachytherapy, stereotactic ablative radiation, Cyberknife—is the best option for each patient.

“The kind of radiation our experts perform is already very focused in conforming to the tumors. Some centers have been so proton focused they are missing the benefits of other types of radiation,” says Viswanathan. “Proton therapy, for example, cannot substitute for stereotactic ablative radiotherapy, so the benefit of an expert team who can make the important comparisons and correctly determine, patient by patient, which form of radiation therapy is the optimal choice cannot be overstated.”

Stereotactic ablative radiotherapy involves many weaker beams that come from a variety of directions and converge at the tumor to deliver a more precise, higher-dose beam to the cancer.

This kind of comparative planning is another unique service of the Johns Hopkins Proton Therapy Center. For each patient, it involves analysis of imaging and treatment plans for each machine to determine which type of radiation therapy is the best approach. Sometimes it may be a combination.

Every type of radiation therapy has its place, but most centers lack the capability to use data and science to make those judgments. “It’s not always obvious,” says Theodore DeWeese, “so this is another area where expertise is vitally important. All plans are not created equally.”

“There are some cancers, such as those in the brain or near vital organs that should get proton therapy, but there are other cancers that would respond better to photon therapy,” explains Viswanathan. “Some patients might benefit from a combination of both. We may want to treat the main tumor with photons and metastatic sites or lymph nodes with protons.”

Working with our radiation oncologists, our medical physicists use supercomputers to iterate the plans hundreds of times to arrive at the most ideal way to deliver radiation to each patient. The selected plan is reviewed, modifications are made, and it is tested with a virtual avatar of the patient to be sure it has the outcomes anticipated. The end product is precision radiation therapy that has been detailed and confirmed at many levels and specific to the needs of each patient.

This complex system scrutinizes and analyzes data from prior patients who received radiation treatment to improve the treatment of new patients. It evaluates the therapies that worked best for a particular cancer and learns from those that resulted in less-than-favorable outcomes to generate an optimal treatment plan. 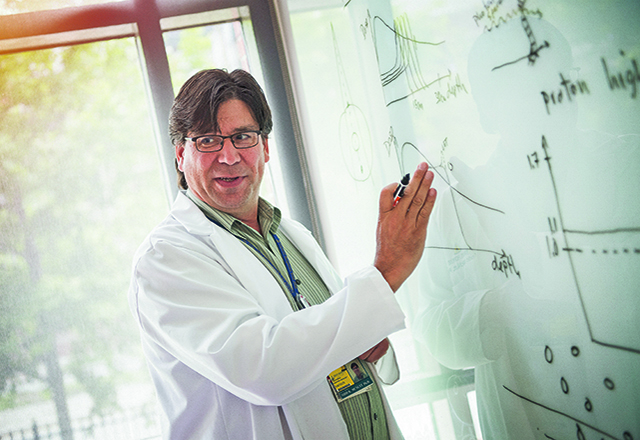 Oncospace, developed by physicist Todd McNutt, Ph.D., compares outcomes to determine when and in which patientsproton therapy is the best option

Ten years in the making, Oncospace was piloted in head and neck cancers, which are among the most difficult cancers for radiation physicists and oncologists to plan for, says radiation physicist Todd McNutt, who built the technology. It often requires many revisions to design a treatment that hits the cancer with radiation but does not do damage to vital organs and glands, such as the voice box and salivary glands, he says.

With such vulnerable anatomy close to the tumor, radiation can impact the function of untreated glands as much as the treated glands, explains McNutt. Instead of looking at each gland as an independent organ, he says Oncospace helps them analyze it all together. It’s called inter-organ dependency, and he and collaborators, like head and neck cancer expert Harry Quon, are the first to use such complex computer analysis to understand it and improve care for patients.

“All of these glands work together to produce saliva. If I give a high dose of radiation to one gland, we have to know how much function we have to preserve in all of these other glands to keep salivary production at a comfortable level,” says McNutt. “If I overdose this ductal region, I may render some portion of the rest of the gland useless.” Although the gland may still function, it blocks the flow of saliva, making it difficult to eat, causing pain and often leading to oral infections.

Oncospace quantifies, measures and analyzes all of the variations in treatments and toxicities in patients already treated to inform the care of new patients. Every patient treated adds to the data, so it is ever improving as new data—and more types of data, such as physician notes and imaging—are included.

There is knowledge in the variations in toxicities and response that occur from patient to patient, and this type of analysis is only possible with the analytic capabilities of Oncospace.

It’s a tool that no other cancer center in the world has, and Quon says it has been instrumental in improving patient care. He credits it with attracting patients to the Kimmel Cancer Center’s head and neck cancer practice.

McNutt’s system provides the guidance that allows Quon and other clinicians to maximize the healing and minimize harm. It scours all of the data on head and neck cancer patients treated in the Kimmel Cancer Center; charts radiation dose distributions, toxicity and other data in vividly colored computerized maps and graphs; and reveals the optimal plan. At the same time, it takes into account and connects all of the variables—age, underlying health conditions and other treatments patients are receiving—and figures out how all of these variables relate and influence toxicities and response to treatment.

They are even exploring the physiological features of glands and the potential role they play. Information like texture, fat content, fibrous connective tissue around glands and overall health of salivary glands are entered into Oncospace to help guide individualized treatment plans for patients.

Oncospace uses a type of artificial intelligence known as machine learning to look back at the patterns of dose within the anatomy and how these doses related to patient outcomes. In head and neck cancer, McNutt and Quon know there are stem cells throughout the glands that initiate the healing that keeps the glands healthy. By querying Oncospace, they found that varying the dose of radiation may be the key to protecting these stem cells and ensuring that salivary function returns after radiation.

“This is one of the things we are most excited about studying in the proton center,” says Quon. “Now when we have to give radiation close to areas that we think contain these repair stem cells, we have the capability to stop the proton beam on a dime. That makes it possible for us to keep radiation at a low dose in these critical stem cell regions. It gives us some new options.”

Proton therapy, he says, offers the ability to improve patterns of dose because it is so targeted. Oncospace also compares photon and proton treatment outcomes to determine when and in which patients proton is preferable and when photon may be the better option. It is one more tool that helps our experts know the best way to use proton therapy.

No one else is doing this because no one else has the technology to quantify and measure the myriad of contributing factors to make these incredibly complex calculations.

McNutt is now beginning to apply the same analytical tools to decrease swallowing problems, potentially life-threatening scarring of the larynx and less serious but nonetheless troubling impact on taste for head and neck cancer patients getting radiation. They are also exploring how to use Oncospace to predict risk of cancer recurrence, and which patients will likely benefit from treatment with immunotherapy, and identify patients who would most benefit from receiving radiation therapy after surgery. Oncospace is also being expanded to mine other cancers, including esophageal, lung, pancreatic, prostate and pediatric cancers, with the goal of using it to inform the treatment of every cancer type. Ultimately, he would like to make the technology available to experts throughout the U.S. and the world.

Experts from Japan, a country with a long history of treating cancer with proton therapy, are coming to the Kimmel Cancer Center to collaborate with McNutt and discuss including their data in the system.

“The truth is no one can keep treating with protons without the evidence and guidance Oncospace provides,” Quon says. He hopes other proton centers will want to collaborate.

“This kind of inventory opens up a lot of opportunities,” says Quon. “The data’s value is not just defined by what you want to do now but also by the possibilities of what we can do in the future.” 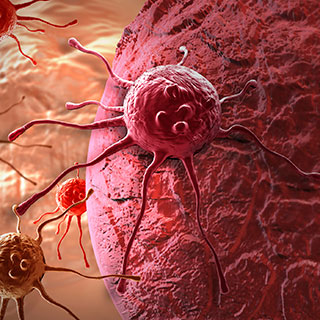