Conventional wisdom has long blamed age-related hearing loss almost entirely on the death of sensory hair cells in the inner ear. However, recent work by otolaryngology researcher Paul Fuchs and graduate student Stephen Zachary suggests another story. Their studies in mice have verified an increased number of connections between certain hair cells and neurons in the inner ear of aging mice. Because these connections normally tamp down hearing when an animal is exposed to high volumes, the scientists think these new connections could also be contributing to age-related hearing loss in these animals, and possibly in humans.

Researchers have long known that the inner ear contains two sets of hair cells, an inner tier closest to the brain and an outer tier. The outer hair cells have a secondary function: to amplify the sound waves within the inner ear. Not surprisingly, Fuchs notes, a loss of outer hair cells closely correlates with a loss of hearing. But studies over the last decade have suggested that changes over time also occur in the connections between hair cells and the neurons to which they are attached.

Each of those neurons acts as a one-way street, Fuchs says, taking signals either from the ear to the brain or vice versa. The neurons that take signals to the ear are known to turn down the amplification provided by outer hair cells when an animal is, for example, exposed to a noisy environment for an extended period of time.

Previous research has suggested that with age, inner hair cells in mice and humans experience a decrease in outgoing neuron connections, while incoming neuron connections increase. To find out if the new connections worked—or worked normally—Zachary painstakingly recorded electrical signals from within the inner hair cells of young and old mice. He found that the incoming neurons were indeed active and that their activity levels correlated with the animals’ hearing abilities: The higher an animal’s measured hearing loss, the higher the activity of its incoming neurons.

“These nerve cell connections seem to be reverting back to the way they worked during early development before the animals’ sense of hearing was operating,” says Fuchs. “We don’t know why the new connections form, but it might be as simple as a lack of competition for space once the outgoing nerve cells have retracted.”

If the same phenomenon is occurring in human ears, Fuchs and his team say there may be ways of preventing the incoming neurons from forming new connections with inner hair cells, a technique that could help maintain normal hearing through old age.

“These cell connections seem to revert to the way they worked in early development.” 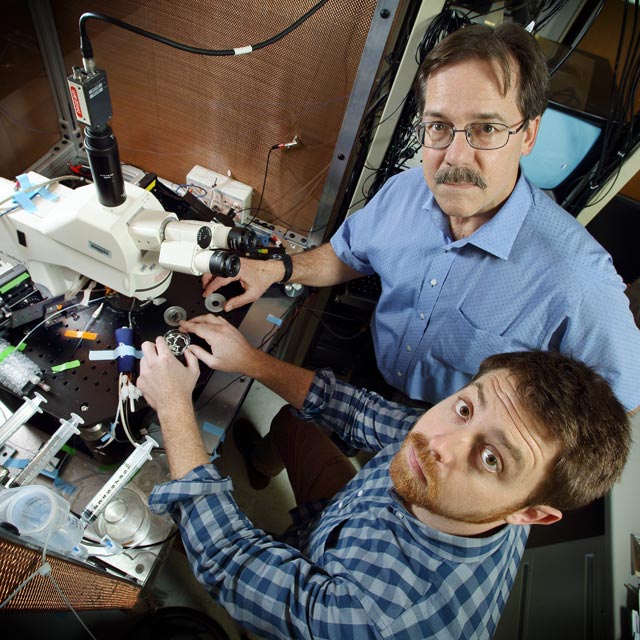