As a harbor pilot in Tampa Bay, Florida, Jorge Viso needed to be strong enough to climb rope ladders to board large commercial ships and guide them in and out of ports.

The arthritis wearing away Viso’s shoulders was making his job difficult. Pain and stiffness disrupted his sleep, as well as daily tasks like buttoning a shirt or reaching for a coffee mug on a high shelf.

With therapy, Viso’s right shoulder improved. But his left worsened, even after he moved from Florida to Washington, D.C., in 2017 and “went from driving ships to driving a desk” as president of the American Pilots’ Association, the trade group for harbor pilots.

On March 8, 2021, Viso, 62, underwent shoulder replacement surgery with orthopaedic surgeon J.R. Rudzki, M.D., at Sibley Memorial Hospital. Viso stayed at the hospital one night, and then protected his new left shoulder in a sling for six weeks.

Viso began physical therapy shortly after surgery, and was back to scuba diving within four months. He’s still improving, he said in mid-July, but his mobility is “incredible” compared with what it was before, and the pain is gone.

Rudzki used a technology called augmented reality to guide the procedure. As he operated, Rudzki wore a headset with goggles that placed a 3D hologram of Viso’s shoulder within his field of vision. The hologram, based on CT scans, was equipped with a guide showing Rudzki how to prepare the site and position the shoulder replacement for Viso’s specific arthritic deformity. Rudzki used hand motions or voice to manipulate the 3D hologram images in space as needed.

As he worked, the other clinicians in the operating room could watch the surgery and hologram in real time on three large screens. “They can see every step that I’m doing and can anticipate the next two steps, which enhances team collaboration for better patient care,” says Rudzki.

In recent years, Sibley has grown its orthopaedics services and demonstrated a commitment to surgical innovations, he says. Augmented reality goggles are the latest advance at Sibley, in a field that has grown more sophisticated over time. One of only a limited group of surgeons using the device in the U.S., Rudzki is excited about the promise it holds for the future of surgery.

“Twenty years ago, we would basically eyeball the procedure, glancing up to look at X-rays and CT scans as we operated,” he says. “No matter how much skill and training you had, there was always the potential for imperfection.”

With preoperative planning and now augmented reality, he says, “We can put in replacements that fit better. They are likely to last longer, with a lower risk of complications.”

The patient receives general anesthesia for the procedure, which takes about 90 minutes. Rudzki says he’s replaced shoulders on patients as old as 94. “We are fortunate to have a team approach with skilled internists, cardiologists, anesthesiologists, nurses and the surgical team, who work together to optimize patient safety and enhance outcomes,” he explains.

Rudzki says he became interested in shoulder replacement surgery because he likes the “complexity and elegance” of the shoulder, as well as the opportunity to dramatically improve the lives of his patients.

“What makes the shoulder unique is its lack of constraint and broad range of motion,” he says. The shoulder’s ball-and-socket construction is quite different from that of a hip. The ball at the upper arm doesn’t rest inside a deep, constrained socket as it does with the hip, but instead floats adjacent to a shallow bowl (glenoid) on the outside of the shoulder blade.

A web of muscles and tendons known as the rotator cuff holds the shoulder in place and, in conjunction with the deltoid, allows it to move a person’s arm up and down, forward and back, and in a circle.

The replacement procedure involves removing the damaged ball (also known as the humeral head) at the top of the arm and preparing the shoulder socket for replacement with a new surface. The surgeon then attaches the replacement ball and socket and sews up the incision. A variation called reverse shoulder replacement switches the location of the ball and the socket.

Arthritis like Viso’s is the most common catalyst for shoulder replacement. “Arthritis is the collapse of joint space, leading to bone grinding on bone, which causes pain, stiffness and lack of mobility,” says Rudzki. “It can be hard to put on a jacket, for example, or to reach into the back seat of a car. That’s where replacement can be transformative.”

Viso says he was intrigued when Rudzki explained the augmented reality technology to him. “I thought it was pretty cool that he could get it so exact,” he says. “It sounds like this may give me a longer life with the artificial joint.” 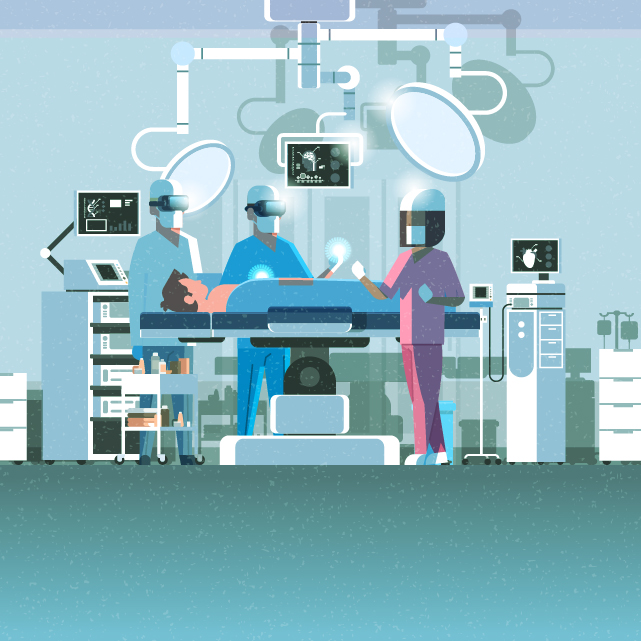 The technology includes a headset that projects medical scans and data in the surgeon’s field of vision above the patient's surgical site. 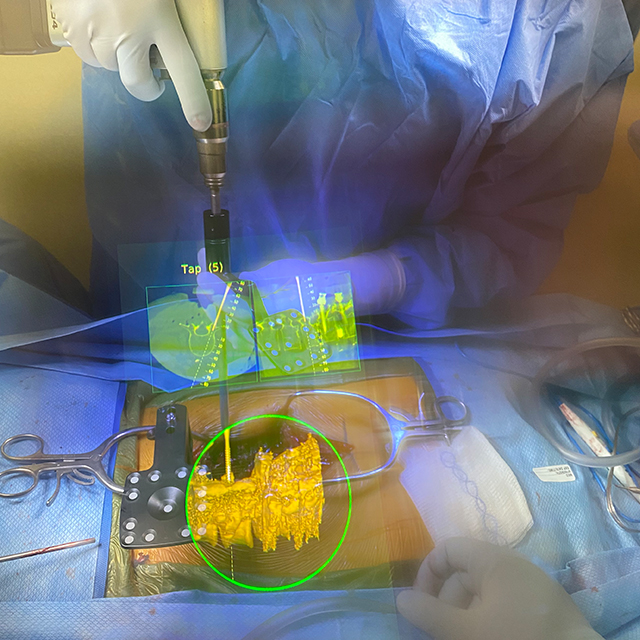 The technology used by the physicians for the augmented reality surgeries consisted of a headset with a see-through eye display that projects images of the patient’s internal anatomy such as bones and other tissue based on CT scans — essentially giving the surgeons X-ray vision.
back to top button