Sharing a meal offers a valuable opportunity to bond.

That’s the unassailable logic behind a dinner series hosted by Johns Hopkins University School of Medicine Alumni Relations, which brings students and alumni together to socialize, network and get advice during a relaxed meal out at a local restaurant.

The Molecules and a Meal series connects Ph.D. and M.D.-Ph.D. candidates and alumni, while Dine with a Doc brings together those with a medical focus. The business-casual dinners, which take place two to three times per year and include Underrepresented in Medicine and Science-specific events, attract a diverse group that ranges from neurosurgeons to researchers testing therapies for the U.S. Food and Drug Administration. Students get to benefit from the experiences of alumni who still work at Johns Hopkins and those who have moved into different areas, including government and industry.

When Michael Fliotsos ’21 signed up for his first Dine with a Doc dinner, he was thinking of the alumni donations that have helped make Johns Hopkins an option for him. “These are alumni who are passionate about education, and I thought that would be a rich and meaningful experience,” he says. “And then I went to one, and it was also so much fun.”

An M.D. student with plans to pursue a residency in ophthalmology, Fliotsos met professionals in his field, including an ophthalmologist of more than 30 years. “It was so cool getting his perspective about the field I’m going into and how it’s changed dramatically over his career, because we’ll experience similar change,” he says.

Elizabeth Peijnenburg ’18, an anesthesiology resident at The Johns Hopkins Hospital, found that questions at Dine with a Doc differed based on what year students had reached in school. The first- and second-years chatted with her about teachers in common, her own medical school experiences and the transition from preclinical to clinical student. Third- and fourth-year students were curious about the interview process, what it’s like to be a resident and how to make it through the difficult intern year.

“One question that frequently came up was how to choose the career you’re going to be doing for the rest of your life, because that is a very daunting task for younger medical students,” she says.

Molecules and a Meal offers a glimpse into the paths available to school of medicine Ph.D. and M.D.-Ph.D graduates and also highlights a shift in perspective that’s occurred over the years, says Peter Espenshade, associate dean for graduate biomedical education and a cell biologist, who recently served as the host of the Ph.D. dinner.

“Many years ago, if a student discovered they didn’t want to pursue an academic career, they often felt like a failure. Our alumni are excited to see how we’ve used events like Molecules and a Meal to change the culture here and celebrate nonacademic careers,” he says. “In reality, the majority of our graduates [like those at] all schools in the U.S. move into nonacademic careers, and we’re training people for that. However, it is less obvious how to access these careers. These personal interactions reinforce that it’s possible. If you know their story and you know that they made it, it shows that you can make it too.”

The dinners can also offer that kind of reinforcement to alumni attendees, says Peijnenburg. “I was able to discuss with them what their different career paths looked like and why they made the decisions that they did,” she says. “And that allows me to look forward toward the next step in my life as well.” 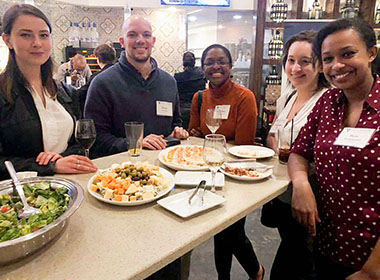