Illustration: Suburban Hospital offers transcatheter aortic valve replacements (TAVR), a minimally invasive procedure to replace a narrowed aortic valve that fails to open properly. Physicians insert a catheter in the patient’s leg or chest and guide it to the heart. A replacement valve is inserted through the catheter and guided to the heart (left). A balloon is expanded to press the valve into place (right). Some TAVR valves are self-expanding (middle).

Eighty-four-year old Ira Geer of Rockville, Maryland, has led a long and mostly healthy life. But during a physical exam two years ago, Geer’s primary care physician detected a heart murmur, and sent him to a cardiologist for testing. As Geer was mostly free of symptoms, doctors determined he could wait a bit before taking action.

By the time his physical exam rolled around again this spring, his doctors thought the time was right for treatment, and referred him to Johns Hopkins’ Structural Heart Disease Program at Suburban Hospital, an extension of The Johns Hopkins Hospital’s longstanding, high-volume program. There, interventional cardiologist Rani Hasan, M.D., and cardiac surgeon Michael Siegenthaler, M.D., determined that Geer had severe aortic stenosis—a narrowing of the heart’s aortic valve, which helps deliver blood to the body. In addition, he had coronary artery disease, a buildup of plaque, in three blood vessels feeding his heart.

After discussing Geer’s situation as a team, Hasan and Siegenthaler, along with team members Greg Kumkumian, M.D., Eric Lieberman, M.D., and Philip Corcoran, M.D., recommended two procedures for Geer. The first was a coronary stent to open his clogged coronary arteries via a tube inserted in the wrist. Following the stent, Geer underwent a minimally invasive procedure called a transcatheter aortic valve replacement (TAVR) to replace his narrowed aortic valve. The TAVR procedure, which has been offered at Suburban since 2017, uses a small tube called a catheter threaded up through the blood vessels in the groin to deliver a replacement valve. While the replacement valve is put in place, filters are inserted into nearby blood vessels temporarily to catch any bits of plaque or debris that may float off during the procedure to reduce the risk of the material traveling to the brain and causing a stroke.

“Patients have a much shorter stay in the hospital after TAVR than if they had open heart surgery,” Siegenthaler says. “They usually go home the day after the procedure. They also do not have general anesthesia, do not need pain medications and their recovery is much shorter. A lot of people really immediately feel much, much better. They have higher energy levels, they can be more active again and they enjoy life more.”

Geer went to the hospital this summer for his back to back procedures. One day the doctors opened the blood vessels feeding his heart and inserted devices called stents to keep them open. The next week, Geer returned for the TAVR.

“I was totally amazed by the whole process because I never had any pains of anything related to my heart,” Geer says. He jokes that he never would know he had a procedure if not for the tiny incisions he has. “I just have to take their word for it that they actually did something.”

Almost instantly Geer, a retired meteorologist, was back to daily activities like copy editing a book his wife is writing. “Dr. Hasan told me I would feel at least as good as I felt a year or more ago, and he’s right.”

Two large clinical trials called PARTNER3 and EVOLUT, published this spring in the New England Journal of Medicine, demonstrated that patients who underwent TAVR did at least as well patients who had open surgery for valve replacement. Johns Hopkins Medicine was a participating study side for the EVOLUT trial. In August, the U.S. Food and Drug Administration expanded its approval of TAVR for patients who have a low risk of death from conventional cardiac surgery.

“Because this procedure is really a game-changer, we can also use the technology in people who before we never would have been able to help,” Siegenthaler says. “We have treated patients who are over 100 years old who were able to go home the next day. That’s pretty amazing.”

Without TAVR, aortic stenosis is “a very difficult problem to manage,” adds Hasan. “Medications really don’t work for this condition. By the time most patients see us, they are starting to develop signs of congestive heart failure or have established congestive heart failure related to their valve disease.” If this isn’t fixed, patients have a 50% increased risk of dying in the next year or two, he says, and quality of life will decline until the valve is repaired.

Geer says he recommends the Suburban Hospital team to anyone considering the procedure.

“They do an outstanding job dealing with patients with everybody working together,” he says. “They made me really comfortable, they answered all the questions I had and they were reassuring every step of the way.” 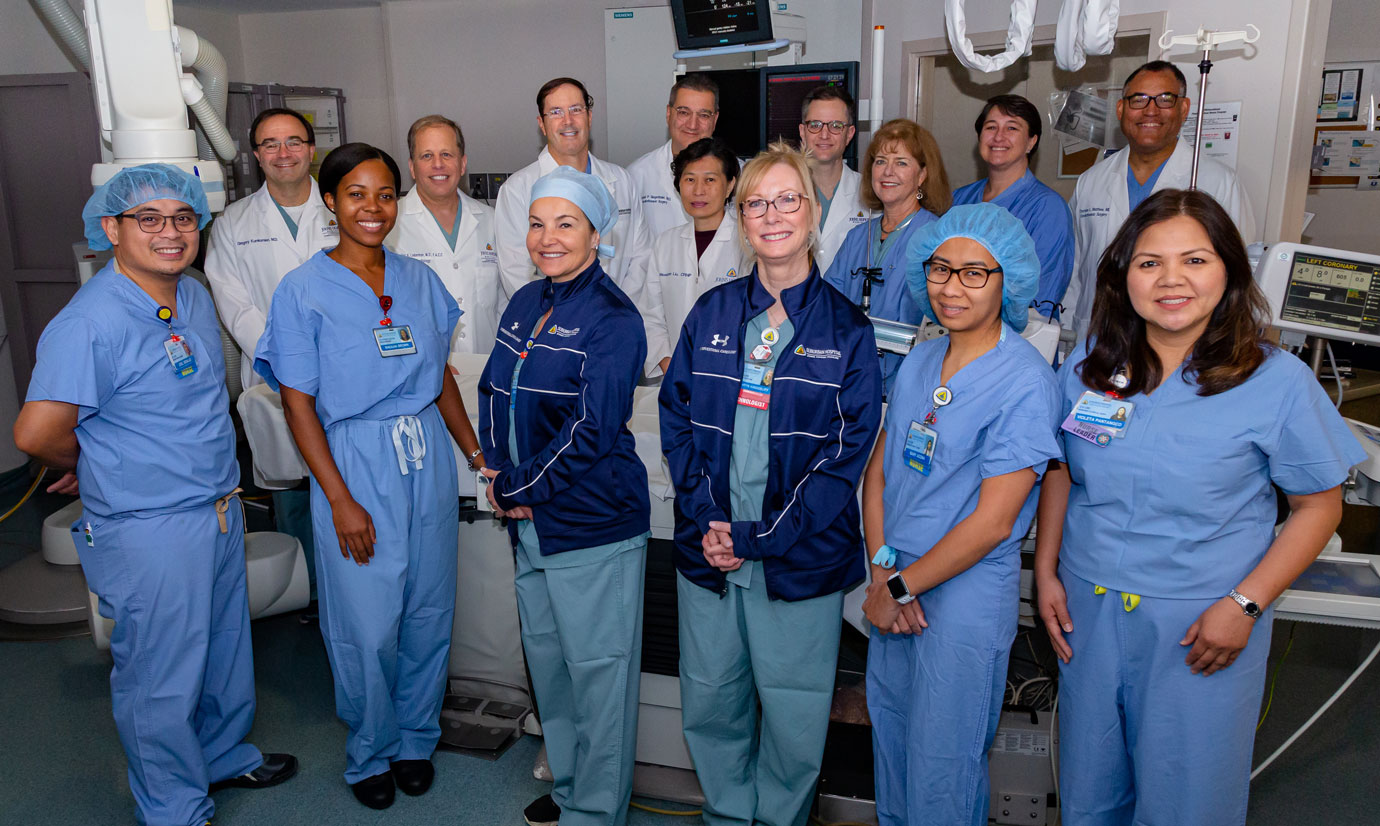 “[Patients] usually go home the day after the procedure. They also do not have general anesthesia, do not need pain medications and their recovery is much shorter.”

For more information or to schedule an appointment with the Johns Hopkins’ Structural Heart Disease Program at Suburban Hospital, call (301) 896-3775.

Two pivotal clinical trials announced this spring found that transcatheter aortic valve replacement (TAVR) could be used to safely treat aortic stenosis even in patients with a low risk of death from surgery. Results from the PARTNER3 and EVOLUT trials, presented at the American College of Cardiology’s annual meeting in New Orleans and published simultaneously in the New England Journal of Medicine, demonstrated that patient outcomes were superior or at least as good in those treated with TAVR compared with those receiving surgical aortic valve replacement. In August, the U.S. Food and Drug Administration approved TAVR in low-risk patients.

Learn more: Read a Q&A with Cardiologist Jon Resar, M.D., a co-author of the EVOLUT study and director of the Adult Cardiac Catheterization Laboratory at The Johns Hopkins Hospital.

From Heart Attack to Boston Marathon, One Step at a Time 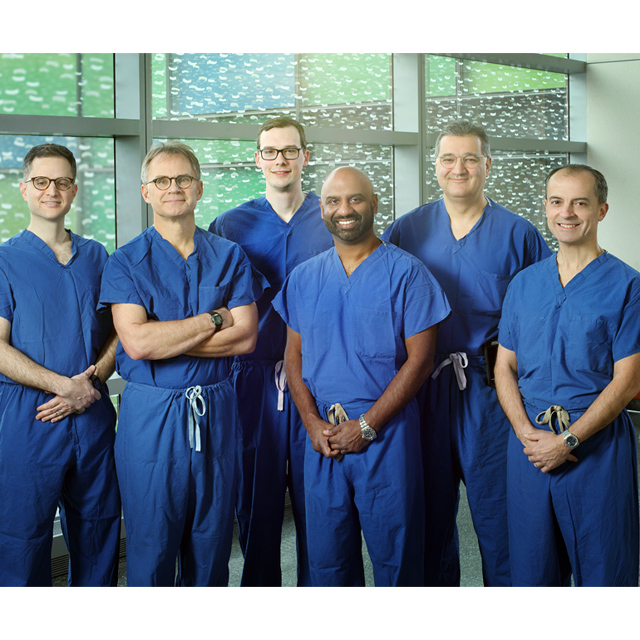 Originally intended for high-risk patients, TAVR is now being offered to low-risk ones as part of a national clinical trial that includes Johns Hopkins.

Washington-area patients with aortic stenosis can benefit from the latest treatments at Suburban Hospital.
back to top button