Looking defeated, the 80-year-old woman arrived at The Johns Hopkins Hospital from the Midwest. For two years, she’d seen doctors about her chronic shortness of breath and fatigue. But her heart turned out to be fine. Not sure what to do next, her husband found Johns Hopkins geriatric psychiatrist Susan Lehmann in an online search and scheduled an appointment.

“Most doctors don’t recognize the threat geriatric mental health problems bring because they’re not trained to do so,” she says. Now, with the release of self-paced, online learning modules she’s crafted for medical students, Lehmann aims to heighten awareness about late-life depression—and its nuances—for the next generation of doctors.

Depression affects as many as 15 percent of people age 65 and older. Other mood disorders, such as manic episodes, can also emerge later in life, says Lehmann, who recently published a book on bipolar disorder in older adults. And, she notes, suicide rates among the elderly are rising, especially among men.

Meanwhile, many Americans are living longer. About 15 percent of the U.S. population is 65 or older. By 2030, an estimated 20 percent of the population will be over 65. “We don’t have enough geriatric experts for the tens of millions affected by aging,” Lehmann says. “And a negative outlook on life can worsen comorbidities, like Parkinson’s disease, strokes and cardiac disease.”

But expertise in this field is woefully inadequate, says Lehmann. In a recently published paper in MedEdPORTAL Publications, Lehmann and colleagues found that some 21 percent of responding medical schools lacked specific instruction or clinical experience focused on geriatric psychiatry. Of those schools, 14 percent reported having no geriatric psychiatrist on the faculty. Yet at some point, says Lehmann, “Every doctor in almost every specialty will interact with geriatric patients. Students need to know what’s considered normal aging, from heart problems to memory to mental health.”

The new modules, says Lehmann, can bridge this gap with “easily digestible” clinical vignettes and videos showing how to engage with older patients and recognize and manage depression. Fourth-year Johns Hopkins medical students who piloted the modules found them easy to navigate and successful in increasing understanding of geriatric depression. She hopes more medical schools will adopt the modules, which are free of charge.

Lehmann draws from nearly 30 years of experience practicing and teaching geriatric psychiatry. In 2011, she was awarded the Berkheimer Faculty Education Scholar Grant, offering resources and time outside her regular duties to create the modules. After reviewing them, says Lehmann, students should be familiar with the signs and symptoms of geriatric depression and screening tools to help establish the diagnosis.

Respect for the elderly comes naturally to Lehmann. She grew up with four active grandparents, one of whom practiced medicine well into his 80s. “They were great teachers,” she says, “and I loved hearing their stories.” It pains Lehmann that poking fun at aging is socially acceptable. “I feel a sense of mission to our older patients,” she adds, noting that geriatric depression is highly treatable. “It’s so rewarding to help people find a better quality of life.”

As for the octogenarian from the Midwest, she benefited from antidepressants and psychotherapy—and became the inspiration for a video vignette in the modules. Lehmann hopes her case will serve as a touchstone for doctors as they see elderly patients. The online modules are available at no cost to medical educators on MedEdPortal.

“Most doctors don’t recognize the threat geriatric mental health problems bring because they’re not trained to do so.”

Recognizing and Managing Geriatric Depression: Part One of a Two-Part Self-Learning Module Set 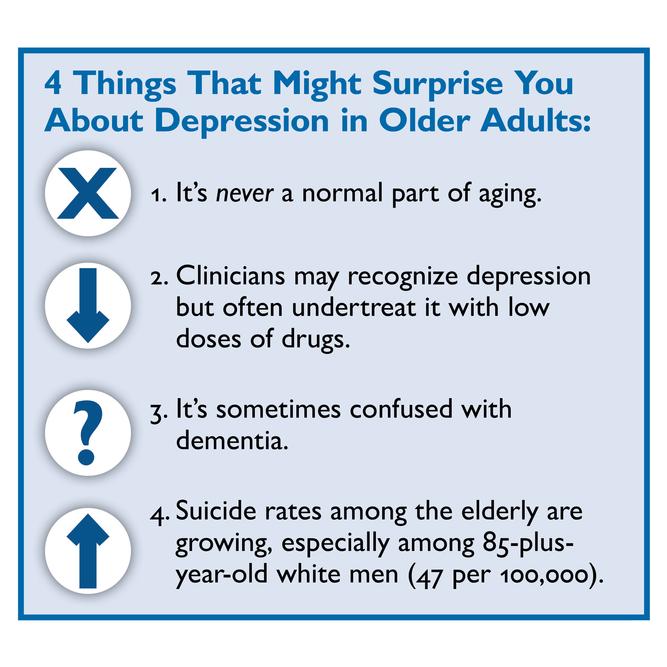