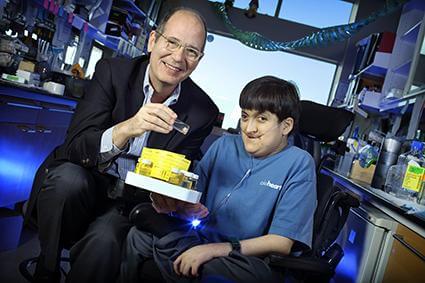 At Johns Hopkins, Dr. (Robert) Greenberg is my “preferred” anesthesiologist because with me, you really have to know how to do things just right, like how to get a breathing tube down my throat. It can be difficult because, given my scoliosis, my esophagus and nasal passages don’t line up. Dr. Greenberg once said he treated me like a NASA mission.


I’m a complicated patient. I was born in Colorado in 1999 with a dislocated knee and long fingers and toes. I had a bilateral inguinal hernia, and needed eye and dental surgeries. I had my first cervical spine surgery a few months later. I saw lots of doctors. They thought I might have Beal’s contractual arachnodactyly syndrome, or possibly Ehlers-Danlos syndrome or Shprintzen-Goldberg syndrome. You learn these things.

Noting my fast heart beat and heart complications that included a dilated aorta and a mild mitral valve prolapse, my cardiologists suspected another syndrome, Marfan, and said I should see the country’s top expert, Dr. (Hal) Dietz at Johns Hopkins. In 2003, I did. Dr. Dietz was doing research on a Marfan cousin, but had not yet created a test for it. He put me on a different medicine, and took a skin biopsy for banking.

In 2006, we got the call. Dr. Dietz had developed a skin test for the new syndrome he’d identified, and I had it—a connective tissue disorder called Loeys-Dietz syndrome. He said I had to take care of my heart because this syndrome can cause an aneurysm or, worse, a tear of the wall of the aorta. And that’s exactly what happened a year later, but I survived.

Over the years, I’d travel to see him. In 2010, he noticed that my scoliosis, another consequence of Loeys-Dietz, was getting worse and squishing my heart and lungs.

Just before Dr. (Paul) Sponseller could place growing rods in my spine to correct the scoliosis and make room for my organs, I arrested and they had to stabilize me. I spent a lot of time in the Johns Hopkins PICU.

Today, my mother and sister and I live in Maryland to be near Johns Hopkins. I continue to get better with physical therapy and follow-ups with my doctors. I like school, astronomy and building model airplanes. My dream future includes taking over the Loeys-Dietz research that Dr. Dietz has begun and finishing it. He has to retire one day. Until then, I like to look up at the sky and wonder about what we can’t see or know now, but will in the future.

Above: Trey Price,14, with pediatric cardiologist and geneticist Hal Dietz in Dietz’s lab at Johns Hopkins.