Scientist Rob Ivkov’s laboratory is different than most Kimmel Cancer Center biology-centric labs. Instead of petri dishes and flasks, there are coils, chillers, and and other machinery.

Ivkov wasn’t always interested in cancer. In fact, he admits he found the biological complexity of the disease daunting. Ivkov’s expertise is in colloid and polymer science and neutron scattering, a technique used to study atomic and molecular structure and motion of materials. He was working as a scientist in private industry developing a bioterrorism sensor that could detect and warn the military of biological warfare agents when the idea for a cancer treatment came to him and his engineering colleague. Over coffee they conceived a cancer treatment that used magnetic nanoparticles armed with antibodies. The idea eventually led him to the Kimmel Cancer Center and a faculty position in the Department of Radiation Oncology and Molecular Radiation Sciences.

Nanotechnology is among the expanding technological advances being applied to cancer medicine. By definition, it is the science, engineering and manufacturing of ultratiny structures, called nanoparticles, one million times smaller than a human cell.

It turns out that many human viruses are about the size of nanoparticles. “I started to think, if nanoparticles are in the size range of viruses, perhaps the immune system reacts to them similarly,” says Ivkov. 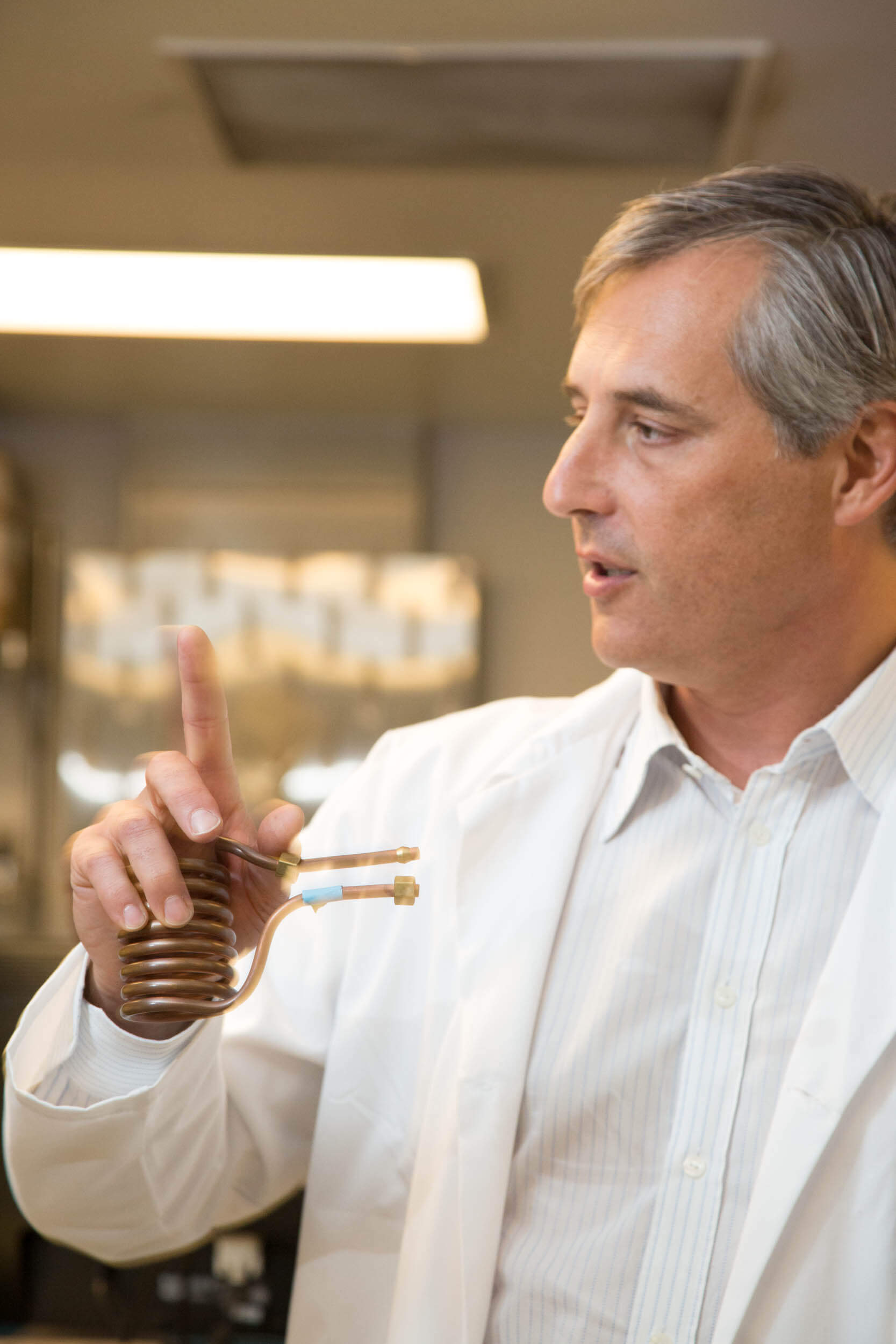 Robert Ivkov uses the metal tip
of a screwdriver to demonstrate
how a machine he built can be
used in a novel nanotechnology
based cancer treatment. The
electromagnetic current generated
by the machine creates a magnetic
field that heats up iron oxide
nanoparticles injected into tumors.
The heat causes lethal internal
damage to cancer cells that
stimulates an immune response.

It is an approach that is unique in the field of cancer nanomedicine where stealth particles that move freely through the body undetected are usually the goal.  Ivkov imagined a different scenario. The virus-like size of nanoparticles should make them suspicious to the immune system, causing immune cells to come in and take a closer look. Since the similarity between a virus and a nanoparticle ends at size, however, after assessing the foreign object, the exploring immune cells would soon recognize that the nanoparticles are not a viral infection, and call off an immune attack. So, Ivkov is fine-tuning the chemistry of the nanoparticles to both attract and maintain the interest of immune cells.

This approach is two-pronged and aimed at treating advanced HER2-postive breast cancer, an aggressive form of breast cancer characterized by a protein that stimulates the growth of cancer cells. In advanced cases, there are very few treatment options.

Ivkov’s innovative approach uses anti-HER2 antibody-loaded iron oxide nanoparticles injected in an around the tumors. The anti-HER2 antibody causes the nanoparticles to bind to breast cancer cells. The next step involves a one of a kind machine he built to induce an oscillating electromagnetic field.  When the magnetic nanoparticles are exposed to the oscillating magnetic field, they quickly heat the tumor, damaging cancer cells and stimulating immune cells much like a fever. Thr damage causes the destruction of the cancer cells, and as the cells are die, they release their proteins—an alert signal to specialized immune cells. This stimulation of immune cells caused by the heat and the presence of nanoparticles provide danger signals that mark HER2 cells as targets for an immune attack.

“When the cancer cells release their proteins in the presence of nanoparticles and heat, it should trigger a molecular cascade of immune signaling that will generate an adaptive anticancer response,” says Ivkov.

Ivkov presented this idea at a science and technology talk at the Library of Congress that was recorded and put on YouTube. Ted Giovanis, the president of the Jayne Koskinas Ted Giovanis Foundation for Health and Policy saw the video, in which Ivkov noted the need for funding to research the fundamental interactions of nanoparticles with the immune system. Giovanis called him, and their conversation eventually led to funding of $1 million over three years to conduct the studies and to make Ivkov’s idea a reality.

“I believe the only way to effectively address metastatic cancer is to re-engage the immune system,” says Ivkov. “The immune system is exponentially more potent than any drug we have, but somehow the immune surveillance and biology work against the host to allow the cancer to survive. We have to figure out ways to activate the immune system against cancer, and I think this is one way to do it.”

On the Web: Read more about the Kimmel Cancer Center’s collaborations with the engineering experts in our special issue of Promise & Progress, Engineering Cures