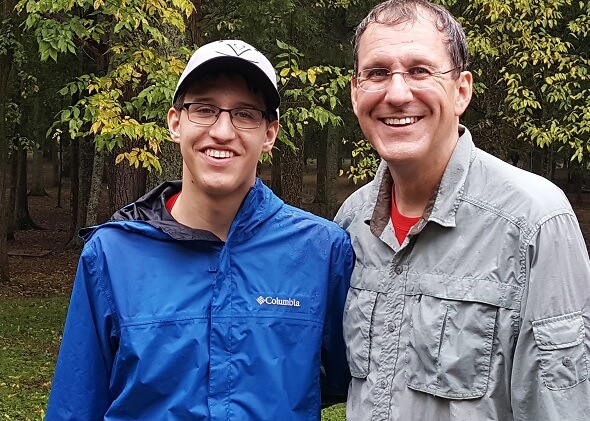 Mike poses with his son Andrew.

In September 2015, Mike Douglas checked into a hospital near his Virginia home for what he thought was going to be routine hernia surgery. As things turned out, the doctor performing the procedure instead did a biopsy when he discovered something unusual inside the abdomen of the then 54-year-old software engineer, husband and father of two.

After an agonizing week of waiting for results, Mike got a call from his doctor with bad news. The tests indicated he had a very rare and potentially deadly tumorous condition in and around his appendix. Called pseudomyxoma peritonei or PMP, the condition is not curable, but it is treatable, Mike recalls the doctor telling him.

“It was quite a surprise,” he says of the diagnosis.

A series of referrals from local doctors brought Mike to The Johns Hopkins Hospital, where he met with an experienced surgical oncologist specializing in the treatment of appendix cancer.

Of the six subtypes of appendix cancer, PMP is one of the most serious, she says. The tumors, known as low-grade appendiceal mucinous neoplasms or LAMN, don’t typically spread beyond the abdominal cavity. They do, however, secrete a jelly-like substance that slowly interferes with the function of the organs and digestive tract, and if left untreated, can lead to death.

In Mike’s case, the LAMN had perforated, spreading tumors throughout his abdomen.

What Mike didn’t know is that the tumors had been slowly growing inside his abdomen for five to 10 years.

Nicknamed “jelly belly,” the condition is known for the inner tube-like roll it produces around a patient’s midsection. Mike chalked his bulging belly up to middle-age weight gain, but his doctor knew immediately it was something else.

“You could see it was very disproportional,” his doctor says. “He’s a very fit guy .” 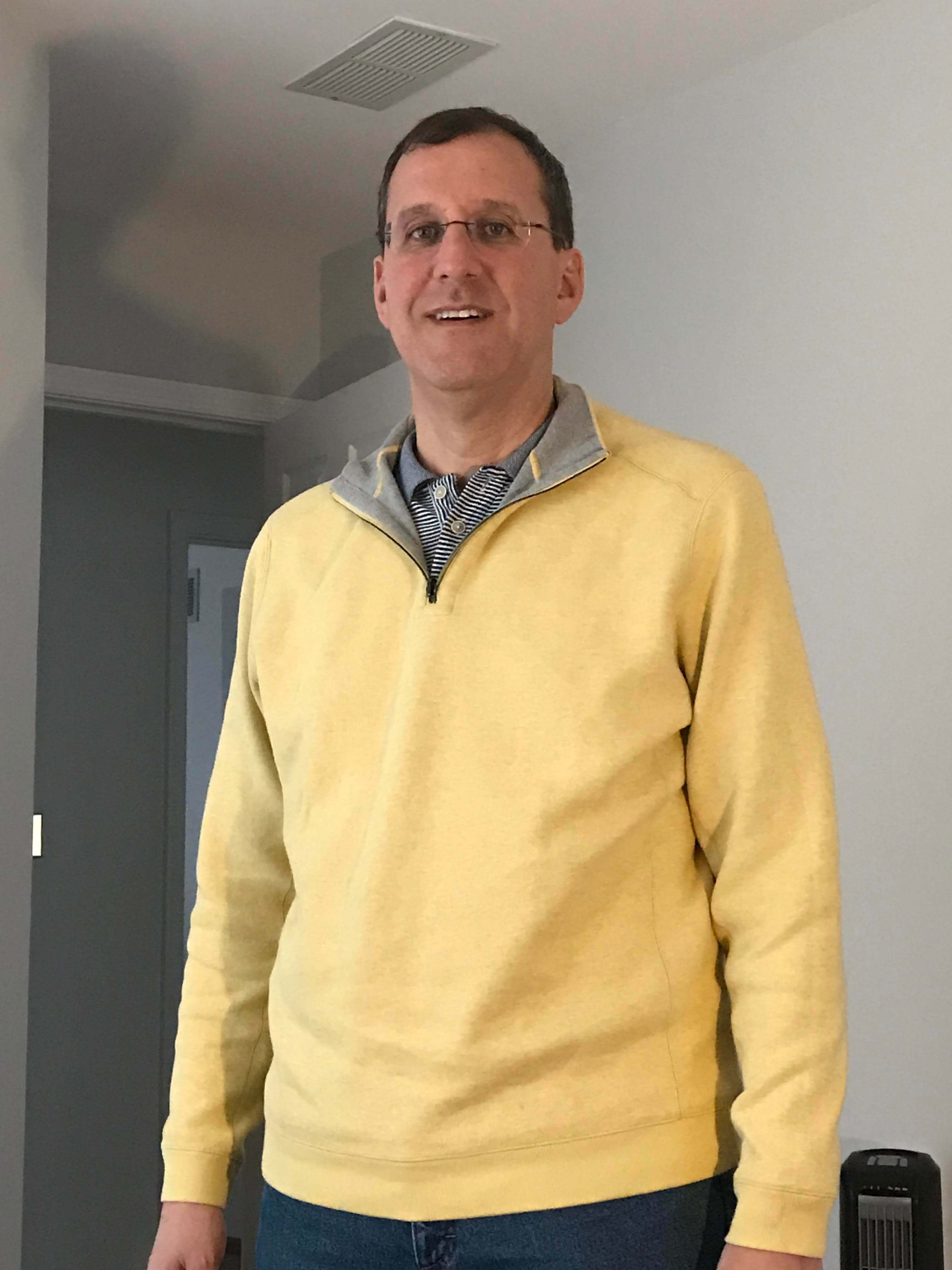 “The reputation of Johns Hopkins... just reassured me that everything was going to be okay,”

The only treatment option for patients with PMP is cytoreductive surgery and HIPEC (heated chemotherapy). The procedure takes about 12 hours, during which the surgeon removes all visible tumors and impacted organs. Mike’s surgery took place in January 2016 and involved removing his gallbladder, spleen, part of his intestines, half of his colon and his diaphragm.

Surgery is immediately followed by a one-time, 90-minute dose of chemotherapy. Unlike traditional intravenous chemotherapy, HIPEC involves delivering chemotherapy solution to the abdominal cavity through a network of catheters (narrow tubes). Heating the drugs allows for better penetration in areas with remaining tumors.

Johns Hopkins is a leader in appendix cancer treatment, seeing 100 to 200 patients each year. The surgical oncology team performs a combined total of about 70 cytoreductive surgeries with HIPEC each year.

Mike remembers being immediately impressed by the direct, no-nonsense approach his physician took with his case. After looking at his CT scan, she presented her plan for the surgery and treatment details ranging from how long Mike would be in the hospital to when he could expect to go back to work.

There is no screening for appendix cancer, and it’s easy to mistake symptoms for something else, as Mike did with his protruding waistline. The most common warning signs are unexplained loss of weight, loss of appetite—cancers often secrete toxins  that make people not want to eat—and gastrointestinal symptoms, such as abdominal discomfort and fullness.

Mike also had a dry cough that he later learned was caused by a tumor growing on his diaphragm. Interestingly, his sister was diagnosed with appendix cancer the year before, though doctors still don’t know if the condition has a genetic component.

If something is not right in your day-to-day, go to your internist and have them look at it.

Also important: getting treatment at a center that regularly handles cases of appendix cancer, if cancer is suspected. The wrong diagnosis can lead to the wrong treatment.

The appendix has all these different types of cancer that can affect it, and getting to places with experience dealing with this is critical. 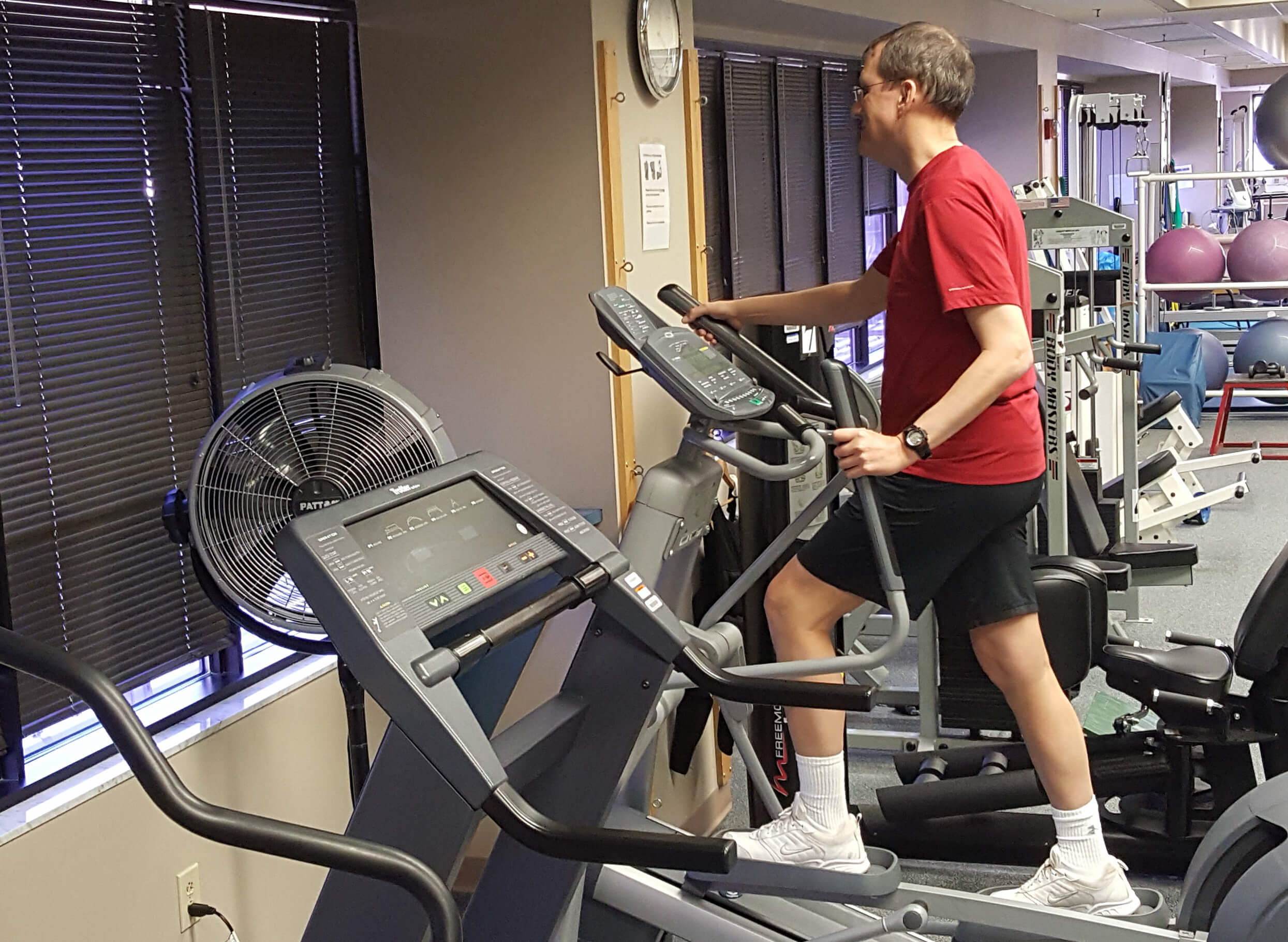 Mike working out  during a recent physical therapy/fitness session near his home.

During his treatment, Mike’s weight dropped from 200 pounds to about 150 pounds. A year after the surgery, he is back up to a healthy 190 pounds. With the help of physical therapy, he has regained much of his core strength and stays in shape doing three- to five-mile walks. He knows at some point he will need surgery again. In the meantime, he has checkups with his physician every four months.

Knowing that his doctor and her team had experience treating his rare form of cancer helped him stay positive and calm after his diagnosis, Mike says.

“The reputation of Johns Hopkins... just reassured me that everything was going to be okay,” he says.

Appendix cancer is very rare, with fewer than 1,000 Americans diagnosed each year. It occurs when healthy cells in the appendix change and grow out of control. Appendix cancer can be challenging to detect and is often found incidentally. There are six subtypes of appendiceal cancer. Mike had pseudomyxoma peritonei (PMP), a rare and very serious iteration of appendix cancer. PMP typically develops in the appendix and often goes undetected because there are no symptoms. Left untreated, the tumor grows and eventually bursts through the wall of the appendix and into the abdominal cavity, where more tumors develop.