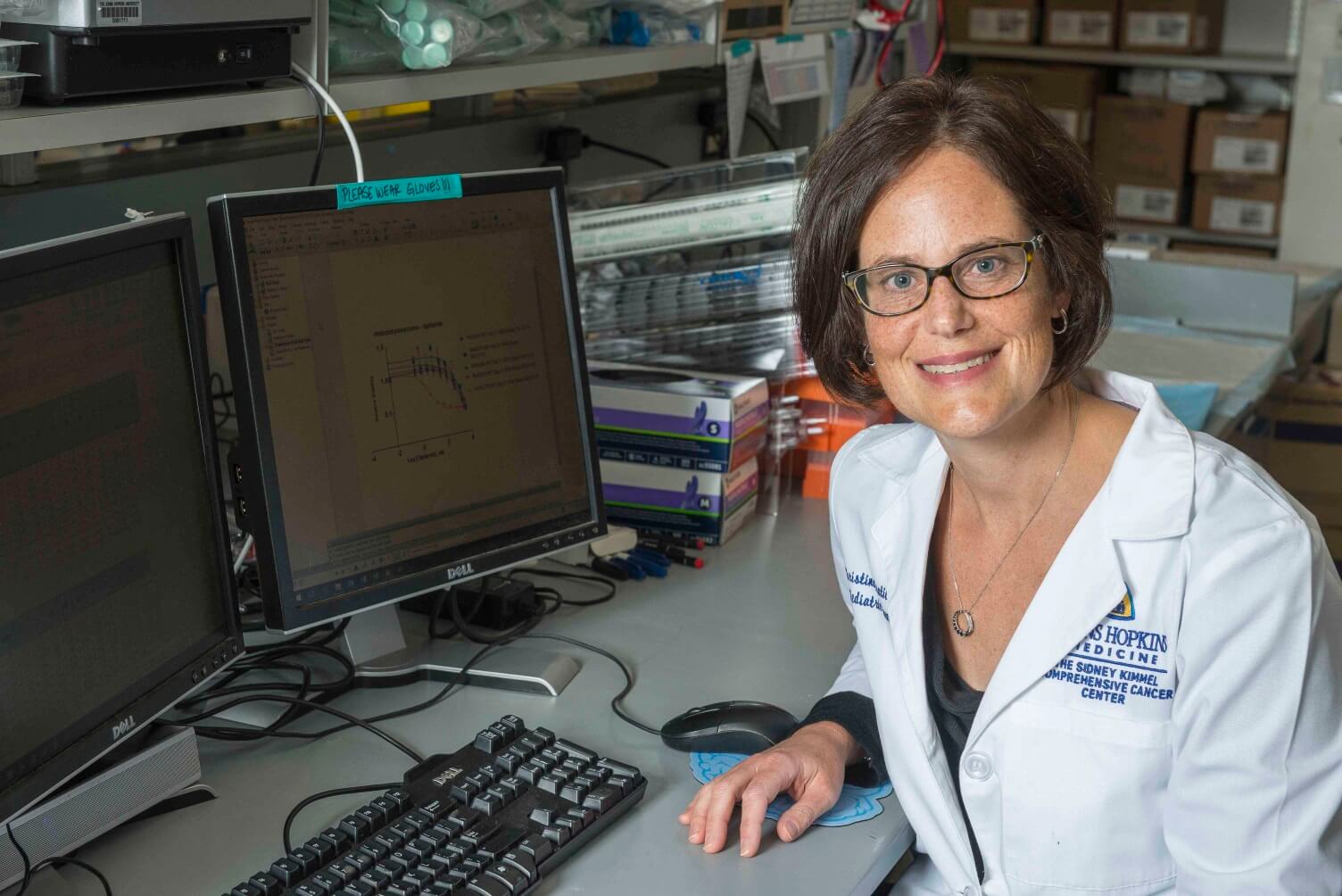 Dr. Christine Pratilas is a pediatric oncologist and research scientist at the Sidney Kimmel Comprehensive Cancer Center and Johns Hopkins University School of Medicine. She joined the Hopkins pediatric sarcoma team in 2014, after completing her fellowship and spending the early years of her career at Memorial Sloan Kettering Cancer Center.

Dr. Pratilas’ clinical expertise is in the management of children, adolescents and young adults with sarcomas, with a special interest in rhabdomyosarcoma and MPNST. In addition, she sees children with melanocytic neoplasms and melanoma; children with NF1-associated non-CNS neoplasms; and other rare pediatric cancers. She has been an investigator on pediatric clinical trials of molecularly targeted therapies against RAF and MEK kinases, including vemurafenib (Roche), dabrafenib (Novartis), and trametinib (Novartis).

She has a strong interest in pediatric cancer genetics, and together with the Clinical Genetics service and the Comprehensive Neurofibromatosis Center at JH, provides care for children with Li-Fraumeni syndrome, neurofibromatosis type 1 (NF1), RAS-opathies, and other cancer predisposition syndromes.

As a member of the SKCCC GAITWAY molecular tumor board, Dr. Pratilas provides recommendations for molecularly targeted therapies and clinical trials for children with cancers that have had next-generation sequencing (NGS).

Genetic predictors of sensitivity to RAF and MEK inhibition.  Dr. Pratilas’ earliest work in Dr. Rosen’s laboratory at MSKCC addressed defining the role of mutational status in predicting the sensitivity to small molecule drugs that target mitogenic signaling pathways. Prior to the recognition of BRAF mutations in cancer, it was widely hypothesized that all tumors with elevated levels of phosphorylated ERK should be susceptible to small molecules targeting the node immediately upstream, the MEK protein kinase. Her work, in collaboration with David Solit, MD, defined the role of BRAF V600E mutation in predicting sensitivity to MEK inhibitors. These findings informed further clinical trial development of MEK inhibitors. This work was followed by further studies to define the MEK-ERK dependence of BRAF mutations in thyroid cancer; uncommon non-V600E BRAF mutations in non-small cell lung cancer; and later, the loss of NF1 in melanoma tumors that harbor both WT NRAS and WT BRAF. With the introduction of selective RAF inhibitors, they were among the first to report on the unique sensitivity of V600E BRAF tumor cells to RAF inhibition, and the insensitivity of tumor cells in which RAF inhibition causes paradoxical MEK-ERK activation.

ERK transcriptional output. With the recognition that levels of phosphorylated ERK were not in fact a predictor of sensitivity to ERK pathway inhibition, we sought an alternate marker of elevated pathway throughput. Using RNA expression microarray analysis, we identified a gene signature, the expression of which correlates with increased ERK pathway signaling output and sensitivity to MEK inhibitors. We then further investigated the role of these genes and found that 1) a nearly identical gene set is identified when BRAF V600E tumor cells are exposed to the RAF inhibitor PLX4032, 2) significant overlap exists with a gene set identified by MEK inhibition of GNAQ mutated uveal melanoma cells, 3) elements of the ERK dependent gene signature are associated with resistance patterns to EGFR inhibition in lung cancer models.

Deregulated feedback in tumor cells with BRAF mutation. Complex feedback circuits are activated in response to mutational activation of components of the RAS signaling pathway. The biology of tumor cells that harbor BRAF mutations and the response of these tumors to pharmacologic inhibition of the pathway are, to some degree, a function of which of these feedback circuits is activated. These findings suggest that a fundamental and necessary property of transforming oncoproteins is their impaired ability to respond to normal feedback pathways. This leads to enhancement of the signaling output required for transformation and also results to a compensatory exaggerated increase in downstream feedback loops. We determined that this exaggerated downstream feedback plays an important role in regulating the transformed phenotype. We then described the adaptive response to small molecule RAF inhibition of these signaling pathways, and how a new steady state expression of upstream pathway elements conditions the response to RAF inhibitors.