When 10-year-old Tracie holds up her Beads of Courage, the necklace is taller than she is.  She points to the colorful beads, explaining each one’s meaning.  “Red is for transfusions, white is for chemo, black is for shots, blue is for clinic visits.”  She’s most proud of the beads shaped like the face of a woman with thick, wavy hair.  “I got these for losing my hair,” Tracie says.  There are three of them on the chain. 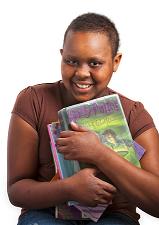 One thing Tracie has never lost in her battle with Non-Hodgkins Lymphoma is her infectious smile.   She loves to wears bright colors —a purple shirt, blue nail polish—that compliment the warmth and liveliness of her personality.  She started her Beads of Courage necklace when she was nine years old and was first diagnosed with cancer.  Then her family—her father Tracy; her mother Natalie; her little sister Jordan; and her older sister, also named Natalie—lived in California.  They are a military family and had moved often.   Tracie was still undergoing treatment when they were informed of another relocation.  They chose Maryland.  “We knew of the reputation of Johns Hopkins,” her father Tracy explains.  “It’s where we wanted to be.”

The family is close-knit, radiating affection.  They jump in to finish each other’s sentences, often breaking into laughter.  Tracie’s illness has led to several stays on the Hopkins in-patient ward.  When she is asked what she liked least about being in the hospital, her older sister Natalie breaks in.  “She loves being in the hospital.  She never wants to come home.”  Giggling, Tracie admits it’s true.  She likes the playroom on the floor and the games the child-life workers organize.  One nurse warned her that if she played any more Harry Potter games, she would end up at Hogwarts!  But ultimately Tracie regrets keeping her family apart.  The best times are when they are all together again.

Cancer patients are often advised to “keep a positive attitude.”  Optimism comes naturally to Tracie.  Now in the fifth grade, she has made friends in her new Maryland school.  The adjustment, her mother Natalie says, wasn’t always easy.  The students got to know Tracie as a child with cancer first.  It took them a while to think of her just as “Tracie.”   “They still have some questions,” Tracie says, “but I can work on answering them.”  She has easily adapted to her role as a leader, and is comfortable as a spokesperson.  She wrote about her illness for the Hopkins pediatric oncology newsletter, and is proud to be a Patient Ambassador, raising awareness of childhood cancer everywhere.

“You can do anything when you have cancer,” Tracie says.  “Well,” she admits with a mischievous grin, “there are some restrictions.  But you can get around them.”  Tracie is busy these days acting in the school play.  She likes to swim, loves to sing, and enjoys reading, especially series like Lemony Snicket.  This summer she plans to return to Camp Sunrise, where she will make new friends and reconnect with old.  When she grows up, she wants to become a veterinarian, but not just any kind.  Tracie will take care of animals with cancer.  Johns Hopkins Hospital, she says, is like her second home.  Her mother agrees.  The family has made a wonderful transition to Johns Hopkins.  As long as Tracie needs it, Hopkins will be there.