Zarwali and Sajjida immigrated to the Unites States from Pakistan ten years ago, shortly before their fourth child, Hamza, was born.  Busy caring for five sons (no daughters!), Sajjida still hasn’t had the chance to completely master English.  But when Hamza was diagnosed with cancer, the family discovered one place where their needs were well understood: Pediatric Oncology at Johns Hopkins Hospital. 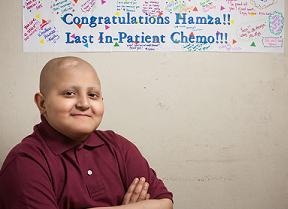 Hamza’s living room is still decorated with the banner that marked his end to in-patient chemotherapy over one year ago. “Congratulations, Hamza!” it reads in bright, colorful letters.  Nowadays Hamza only returns to Johns Hopkins for check-ups.  But his journey to wellness was not an easy one.  He was 9 years old, an active third-grader who enjoyed science, math, and games of kickball, when his head began hurting.  A short trip to a local E.R. led the family to Johns Hopkins, where they learned Hamza had Burkitt’s Lymphoma, and his treatment began.

Now 10 years old, Hamza is a warm, engaging boy with an infectious smile and a big heart.  He tells his story softly, speaking with quiet assurance.  He spent months in the hospital, as the family coped with his illness.  His mother, Sajjida, stayed overnight in the hospital with him, while his father, Zarwali, cared for the other boys, rising early to get everyone off to school before heading to work.  Whenever they could, the family came to visit.  Little brother Talha enjoyed the playroom, where Hamza joined him when he felt well enough.

Having cancer, Hamza says, made him feel “a little sad, a little angry, and sometimes afraid.”  But there were bright moments in the months of treatment.  Hamza still remembers fondly the nurse who cared for him with special warmth and became his favorite.  He made up for the schooling he missed with tutoring at the hospital.  His father brought home-cooked meals so that Hamza could enjoy his favorite foods. And one night Talha was even able to spend a night in the hospital, supporting his older brother.

Hamza has advice for any child diagnosed with cancer. “There isn’t anything to be scared of,” he says.  “It’s not that hard.  I got through it and so can you.”  Acting as a role model comes easily to Hamza.  He is a patient ambassador, focused on raising awareness and funds for research so that every child can be cured.

Hamza’s family still returns to Pakistan for vacations, visiting cousins and relatives, rekindling old ties.  But Baltimore has become home. “You are a lucky man,” Hamza’s father says to his son.  “You are going to have a good life.” And the physicians and staff at Johns Hopkins are proud to have played a role in that.