Carla was fifteen years old, an active 10th grader who loved music and dancing, when she learned she had cancer.  She was walking down the steps at home when her leg suddenly gave way.  Her mother, Clara, knew something was wrong when her doctor at Wyman Park didn’t even ask for an x-ray.  Instead the family was sent straight to Johns Hopkins Hospital, where they found out Carla had osteosarcoma.

Usually cancer is an invisible disease.  It attacks the blood or internal organs, making patients gravely ill, but leaving their outward appearance unchanged. Carla’s situation, the family soon learned, would be quite different.  The tumor had grown in her femur, and even after multiple rounds of chemotherapy showed no signs of diminishing.  The family had hoped Carla could undergo limb-salvage surgery; instead, they were told, her leg would have to be removed. 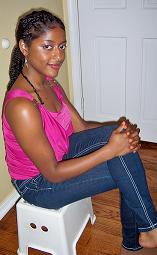 They had little time to prepare. “You’re like a boxer on the ropes,” Carla’s father, Will, says.  “You don’t have time to think.  Everything is happening so fast, and you’re trying to keep up in your mind and in your heart.”  As her parents cried at the news, Carla put on a brave face.  “The leg has to go,” she said.  But the aftermath of the surgery came as a shock.

Somehow Carla had imagined she would immediately receive a prosthetic leg that looked much like the one she had lost.  Instead she woke to find a metal rod with a foot attached.  Soon the nurses were encouraging her to get up, to go to physical therapy and learn how to walk again.  But walking, Will recalls, was only one part of Carla’s dilemma.  The entire family had experienced a massive “disconnect.”  It wasn’t just the cancer that they needed to cope with.  What had happened to their daughter?  Where had Carla—physically, psychologically, and emotionally—gone?

The medical care at Johns Hopkins had been excellent, and the family was thankful for that.  Fitting Carla with an appropriate prosthetic was another matter.  The device given her in the hospital was only temporary, and soon the family received a referral to a local prosthetic company.  But the service personnel there were unused to dealing with active teens.  If patients achieved basic mobility, they were satisfied.  Clara and Will knew Carla needed much more than that.  She needed to return to the person she had been before the cancer—before the surgery took her leg away.  They decided to take her to Walter Reed.

“Unfortunately,” Will explains, “with our country at war, the Army has become an expert in prosthetics.”  Both he and Clara have served in the military; Will’s service is over, but Clara is still active.  At Walter Reed, Carla would meet patients who were closer to her in age, who had been high school students and athletes when they experienced the sudden, traumatic, loss of a limb. The soldiers, Carla’s parents believed, would be an inspiration for their daughter.  “Take their strength and apply it to your situation,” Will said to Carla.

Clara remembers the day they arrived at Walter Reed.  “I need my daughter to have what the soldiers have,” Clara said to the coordinator who greeted them, “because if you don’t—the money you are going to spend on psychological care is going to far outweigh the physical need that she has.”  The coordinator looked at her and said: “I think we can help her.”  Within minutes, the family was touring the hospital’s facilities.

Throughout her illness, Carla’s parents had been her greatest advocates.  Now, however, Clara realized, she needed to be more than just Carla’s mother: she needed to be her coach. “I looked at her the way I look at my soldiers,” Clara said, “when I motivate them to go on.”

Carla was reluctant to leave the house. When the family took her out in a wheelchair, people would look at her or point.  Clara was relentless. “I don’t care what those people do,” she told Carla.  “If they look at you, you look at them to their face, because then they’re going to look the other direction and keep going.  You can’t become a target.”

“We had to teach Carla to confront life,” Will says. “Never to shy away.”

Returning to school was a difficult transition.  Carla recalls the day she made a new friend—or so she thought.  A girl sat down beside her in class and the two chatted.  Then Carla stood up, and the expression on the other girl’s face changed.  The next day when Carla came to class, the girl was standing apart, talking and laughing with a group of students, cruelly imitating Carla’s limp.  The loss of Carla’s limb had made her a visible representation of illness, a reminder that we all are vulnerable.  And to some people, that was reason enough to act with callousness or cruelty.

But bit by bit things began to change.  With the help of the doctors at Walter Reed, Carla began to walk easily and fluidly, without pain.  The turnaround came the summer after 11th grade when she decided to attend the youth camp run by the Amputee Coalition of America.  Carla remembers smiling when she arrived at the camp.  “I realized I wasn’t the only one going through this.  There were kids missing one leg, two legs, arms; those people were amazing. I wanted to be amazing, too.”

At camp, Carla rediscovered herself.  “I found I could do anything I wanted. I could be the person I was before I got sick.”  Carla is a beautiful young woman with bright eyes and a warm personality.  She’s quick to smile, even when recounting difficult details of her ordeal. “I learned I was normal,” she says.  I didn’t care what people thought about my leg anymore. I was wearing skirts, shorts; after camp, I felt like a million bucks.”

The family’s journey was not yet at an end.  Two years after her initial diagnosis, Carla’s cancer recurred in her lung and she underwent a second surgery, followed once again by chemotherapy.  But it was a comfort to be back again at Johns Hopkins on the pediatric ward.  The nurses made the family feel welcomed, and they appreciated the support from other families also confronting cancer.  Even today, over two years after her last surgery, Carla still reminisces about old friends and sharing pizza night at Johns Hopkins.

Nowadays Carla is a student at the Community College of Baltimore County.  She has just been accepted to the University of Maryland at Baltimore County and plans to pursue a career in veterinary medicine.  Recently she spoke at a dinner for a foundation, and when she told the members of the audience about the loss of her limb, they gasped.  The entire evening as Carla, wearing a dress, circulated among the guests, no one even noticed she was wearing a prosthetic.  But the journey was not an easy one.

“You create your own boundaries,” Will says.  They are most proud of the way their daughter has become a role model for others.  She is a patient ambassador at Johns Hopkins, volunteers at Walter Reed, and is a counselor at the ACA camp that changed her life.

“When I look forward in life,” Carla says, “I see myself as a person who can take chances, who can become a leader, who can understand what people are going through, because I’ve been through a difficult situation. People with prosthetics should know they don’t have to feel limited in any way, they can run, dance, ride a bike, wear heels.”  With parents like Clara and Will backing her, Carla knows her future is boundless.  “I wanted to deal with cancer, to be a cancer survivor, and move on with my life.  I’ll never forget what happened, but I won’t let it affect the person I become.”

“Sometimes,” Carla says, “I forget I have a prosthetic.”  Recently the family played a game of Dance Dance Revolution and, with a grin, Carla reports that she beat them all.