Johns Hopkins Pediatric Oncology is pleased to participate in Beads of Courage, a national program designed to honor the challenging journey that children take while experiencing cancer and related treatments.  A child receives a bead for procedures, tests and treatment milestones.  The collection of beads become a symbol of courage and serves to remind them, their family and friends of all they have accomplished along their treatment path.It has been an overwhelming success due to the generosity of Courtney’s Fund and the multi-disciplinary collaboration of the Pediatric Oncology Team. Through the program, children tell their story, using colorful beads as meaningful symbols of courage that commemorate milestones they have achieved along their unique treatment path. Patients as young as three-years up to the twenty- years of age find joy and pride in the experience of receiving, tallying and telling others about the significance of their beads. 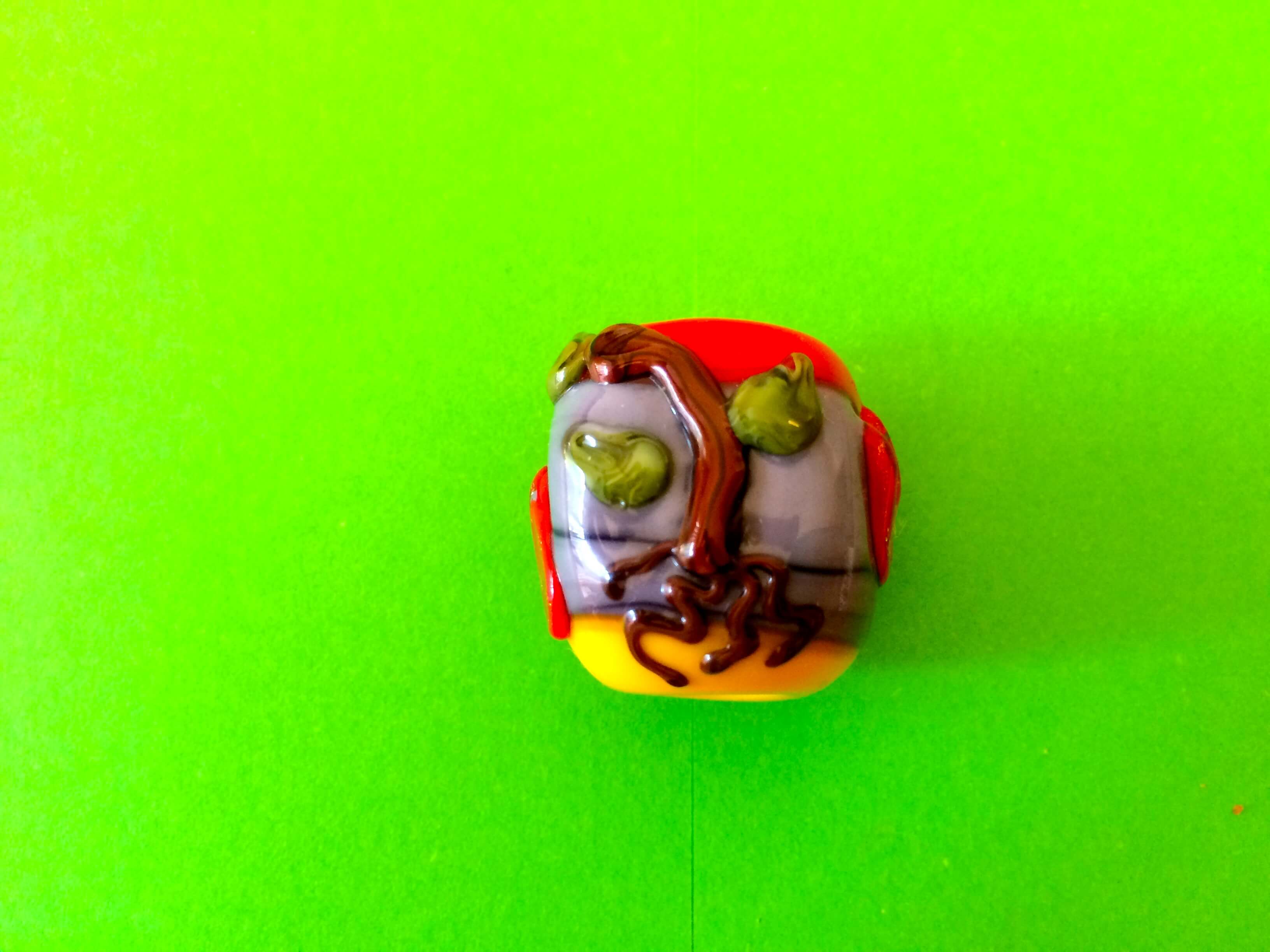 The Beads of Courage Challenge forms were everywhere, in vibrant colors, asking us to doodle something inspirational and funky. The doctors told us we'd be holed up here for at least a week if not more; Nika had finished playing with every toy twice over.

So, we stocked our rhinovirus room with fun art supplies - glitter glue, paint, markers, stickers...you name it. We killed the long waking hours sketching and painting, hoping Nika's counts recover, hoping it's nothing more than a cold, but not talking about it.

If Strength were a bead, what should it look like?

I imagined a little child holding that bead; how could we sculpt a shape that tells a kid to hang in there while her hair is falling out in clumps? I asked Nika.

"You remember that small tree you showed me which cut through the concrete wall and grew, I remember that," she said. Our version 2.0 of the faith of a mustard seed.

A crowded, coastal city in India. Nika is exactly 3 and a half years old, this started out as a holiday but she has returned from 45 days in a bare hospital room after four rounds of chemo, her bones showing through her clothes, her face gaunt, her eyes tired, her hair gone. She wants to know when she can go back to her Daddy in America, to the playground in our neighborhood, to her pre-school in Fairfax, VA. The aromas from her grandma's kitchen make her sick, so we escape to our terrace - a large space that forms the roof for three 1200 sq. ft. apartments, so that’s about 4000 sq. ft. of our personal piece of sky with pigeons circling overhead, like a personal pan pizza in a city that has no decent public playgrounds or parks. The terrace is bare except for a red ball - the 'boo boo' which we kick around and some random trees that grow through the cracks in the wall. Sometimes, we must find strength that's local, not some lines from long ago which someone wrote when cancer did not have a name. And, remember, it's a 3-year-old.

Nika saw how the sapling with heart shaped leaves- a peepal tree, cut through the concrete wall, its roots willing themselves to bear the weight, it's leaves standing proud and tall. Nobody watered it, no one took care of it, but it just decided to live. This was something real andpalpable, which I could show Nika again and again, an allegory for little Nika's journey of faith that had just begun.

And, inside her grandma's home is a little oil lamp, a staple in all Hindu homes, that never goes out. Nika's grandma lights it every evening and before every chemo, every injection, blood draw, before any needle pierces Nika's frail body. "Don't worry, I've lit the lamp, God is with you," she would say to Nika, a simple message, yet a stark and powerful image - the tiny flame.

With these two thoughts, we got to work on our bead design. When Nika felt strong enough between the nurses and doctors' rounds, she would draw some, I did a bit and we had a few versions of it ready.

Finally, Nika submitted a cube shaped design colored in the auspicious Indian colors of turmeric yellow and vermillion depicting a peepal tree cutting through the concrete on the front and and a glowing oil lamp on the other facade. On the side of the bead, teardrop shaped dots of blood against a grey backdrop for the concrete wall.

By now, our room was full of glitter and we were still holed up. So, we worked on one more design and sent that in too, hoping the probability theory kicks in. You send in more entries, there's a better chance the glitter will rub off.Something worked :-)

Reflection of the Beads of Courage Program from Patient Ambassador, Neha

It’s can be unnerving to realize how much cancer treatment is like a story.  A story about a war against oneself, a war to continue surviving, a war to return one’s life to the potential it had before cancer. There is a reason cancer patients are called warriors, for they are fighters in this war.

The treatment is the battle plan in the war to live, and the chemotherapy, the radiation, the surgeries, are like battles, battles against oneself. And just as it is dishonorable to ignore or forget any of the battles in a war, it is also dishonorable to forget what one has done to overcome cancer in their own personal war. It is dishonorable, after treatment, to forget what one’s life has cost. However, this is a very common problem for cancer patients.

Because the battle to live has so many unpleasant skirmishes, afterward, many of them end up blending together, until patients start forgetting what they’ve been through. Yet every chemo, every radiation, every surgery holds importance. That’s why Johns Hopkins participates in the Beads of Courage Program.

Created by Jean Baruch, a Pediatric Oncology nurse, in 2004, the Beads of Courage program gives children a bead after they have undergone a hospital related incident. Children who participate in the program receive different colored beads that represent milestones, procedures, and acts of bravery. This program rewards children for their accomplishments, and allows children to celebrate and track their progress.  More than that, it also gives children a way to get through future procedures, because they know that, at the end, they will get another bead to add to their collection.

It is not uncommon for children to amass bead strands that are multiple feet long, filled with beads that represent the child’s treatment.  Not only do the beads allow children to remember their journey though cancer, and their accomplishments, but the beads also provide closure to the parents.

Beads of Courage sends a special, handmade, butterfly bead to any family that has lost a child to Pediatric Cancer. Traditionally, the Beads were sent a couple months after the child passed away, but they have become so helpful in allowing the parents to grieve that many are given soon after the child is gone.

Beads of Courage also rewards special acts of courage that the patient has undergone by giving the patient a handmade bead. The beads not only help children remember what they have gone through, but they also serve as the child’s story. The child can proudly point to the beads and show others what they’ve been through, the war they’ve fought for their right to live, and the battles that came along with the war. For life is a pricey gift, and the children in pediatric oncology have learned and understood its true cost.