The convergence of genetics with immunotherapy is a direct result of the spirit of scientific collaboration at the Johns Hopkins Kimmel Cancer Center.

Thanks to the groundbreaking work of renowned Johns Hopkins scientist Bert Vogelstein, M.D., the world has known for some time that cancer is a disease caused by mutations in the genetic code. Now, it’s become clear that genetics aren’t just at the root of cancer, but may play a key role in predicting how patients respond to cancer therapies.

In 2015, an immune modulation study on anti-PD-1 revealed only one of 32 colon cancer patients responded to treatment despite the successes being seen with the treatment in melanoma and lung cancer.

Investigators Drew Pardoll, M.D., Ph.D., and Suzanne Topalian, M.D., shared their findings with Dr. Vogelstein’s team at the Kimmel Cancer Center’s Ludwig Center, where other colleagues quickly theorized that the responding colon cancer patient must have had an abnormally high number of mutations due to an inherited disorder called Lynch syndrome.

Immune cells are more likely to recognize and react against cancer cells that have more mutations, like those in many cases of melanoma and lung cancer. The anti-PD-1 immunotherapy was successful in this one colon cancer patient because his cancer contained an unusual amount of mutations, making it easier for his immune system to differentiate the cancer cells from the normal cells.

The immunology-genetics connection was made. And now, through the Genetics Program at the Bloomberg~Kimmel Institute, investigators are looking to build upon it.

Genetics is the study of genes, which are made from DNA and are responsible for making specific proteins or molecules that perform important cell functions.

What does it have to do with cancer?

What are the program goals?

Identify genetic subsets of patients who may be more responsive to certain types of immunotherapies, and use this knowledge to treat patients earlier and with therapies that are more likely to work.

What have researchers at Johns Hopkins learned so far?

Hopkins geneticists found in some colon cancer patients, a specific genetic marker called mismatch repair deficiency, characterized by more than 1,000 mutations. About 60 percent of patients with this biomarker responded to anti-PD-1 treatment in a landmark study. None of the patients without the marker responded.

Tumors have long been analyzed and treated based on where they arise, but as we learn more about the role of genetics in the formation of cancer and how tumors respond to treatment, it’s clear that the field is moving toward a more precision approach. 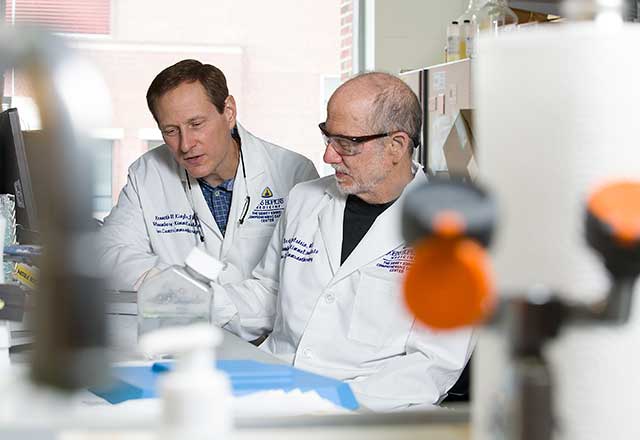 The team, led by Dr. Vogelstein, is continuing to decipher the human genome and identify the genetic mutations that might increase the likelihood of some cancers being successfully treated with immunotherapy. Their goal is to identify additional biomarkers that are associated with a positive response to therapy, and develop tests to help doctors determine prior to treatment whether a patient’s tumor has these biomarkers.

Johns Hopkins Kimmel Cancer Center scientists Bert Vogelstein and Dung Le discuss how, for the first time, a drug has been FDA-approved for cancer based on disease genetics rather than type.