Sadie and Her Gift 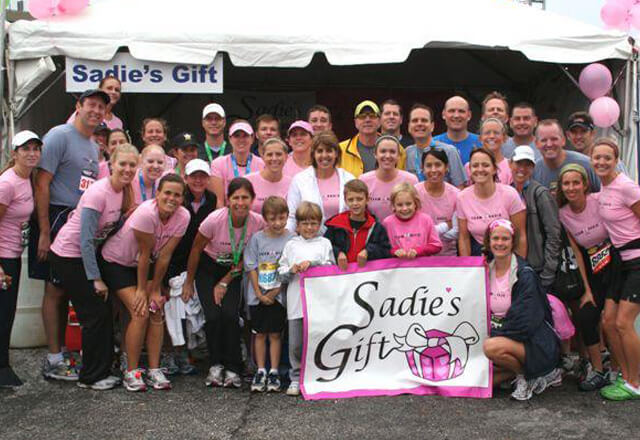 During a routine prenatal checkup, doctors informed Amy Abell that she was positive for Group B Streptococcus (Strep), a usually harmless bacterium in adults that can be devastating when contracted by an infant during birth. Antibiotic treatment administered over four hours during birth can protect the infant from contracting Group B Strep, but Amy delivered Sadie Elizabeth Abell in a mere two and a half hours, meaning Sadie did not receive the full dose of antibiotics.

A few hours after birth, doctors diagnosed Sadie with Group B Streptoccocal septicemia, a bacterial infection of the blood. A local hospital transferred Sadie to the Johns Hopkins Children's Center, where she was admitted to the pediatric intensive care unit (PICU) and placed on ECMO, a machine that takes over the function of the heart and the lungs.

"While Sadie was on ECMO, her blood clogged the machine and they had to switch out the machine for a new one-temporarily stopping  Sadie's heart and lungs while they did so-and they set a new record " says dad, Jason. "I think it is so neat, that even though they're the best they want to continue to get better. And something that happened with Sadie could potentially help another child at Hopkins."

Sadie's condition continued to worsen, and despite the excellent care she received, on Dec. 19, 2006, three-day old Sadie Elizabeth Abell passed away. Only one picture exists to document the short life of Jason and Amy's third child.

"I know without a doubt that they did everything they could to save my child's life," says mom, Amy, "She died for a reason and for a purpose, and there is purpose in her life still today."

Eight years later, Jason and Amy are still involved with the Johns Hopkins Children's Center through their organization Sadie's Gift, which raises funds for pediatric simulation training at Johns Hopkins. The parents established an endowment in Sadie's name that they hope will reach $1 million by Dec. 10, 2016 - what would have been Sadie's 10th birthday.

"We were immediately drawn to how we could show our thankfulness, and recognize what a blessing Hopkins has been to us," says Amy. "That's why we work hard to give back in our small way to the Johns Hopkins Children's Center and support the passions of the physicians that worked so hard to take care of Sadie."