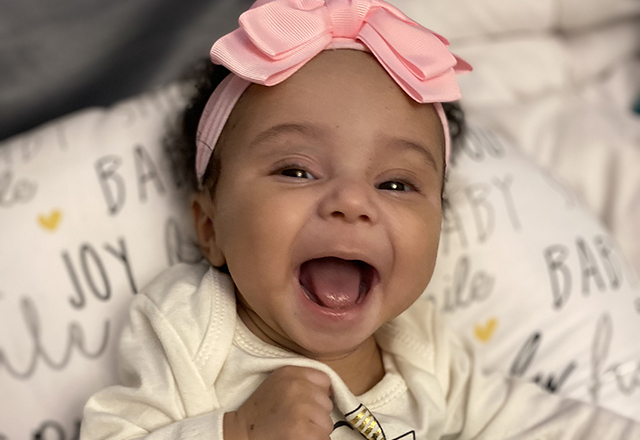 When Chelsea and David learned they were expecting, they couldn’t have been happier. Halfway into the pregnancy, however, they received shocking news: Their little bundle of joy had a heart defect. They were referred to Johns Hopkins Children’s Center, and doctors diagnosed their unborn baby girl with a rare congenital heart abnormality called tetralogy of Fallot, or TOF, with an absent pulmonary valve. TOF is a combination of four heart defects that can lead to lack of oxygen in the blood and reduced blood flow to the lungs. This abnormality can also cause blue baby syndrome, a condition in which a baby’s skin turns blue, often at birth. With her absent pulmonary valve, Chelsea and David’s unborn baby was experiencing a compression of the airway that could lead to insufficient levels of oxygen for survival. Fewer than 1% of babies with congenital heart disease have the same diagnosis.

In the early morning hours of Nov. 21, 2019, Chelsea went into labor. She and David made the three-hour drive from their home on the Eastern Shore of Maryland to the Children’s Center to ensure their baby received the critical care she needed. Their daughter, Navy, was welcomed into the world later that same day. When she was born, Navy’s lips and feet were blue, as were some of her fingers. “We didn’t know the seriousness of the situation until they rushed me to cut the umbilical cord,” David says. Navy was soon taken to the pediatric cardiac intensive care unit and placed on extracorporeal membrane oxygenation, or ECMO, a system that provides heart-lung bypass support outside the baby’s body. “I’ve only had a moment with this child, and now I’m thinking about the ‘what if’ of ‘will I have to bury this child?’ That was definitely the scariest,” Chelsea recalls.

Navy remained on ECMO for four days and suffered a mild stroke, which can be a complication from the bypass support system. “It’s overwhelming to see all of the lines and the beeping, and the medicine, but then you see all this care around her. It makes up for it,” Chelsea says.

Soon, Navy began to face other serious health concerns not related to her heart condition. She developed reflux and was unable to keep food down. Samuel Alaish, M.D., surgical director of The Hopkins Resource for Intestinal Vitality and Enhancement, diagnosed her with necrotizing enterocolitis, or NEC, a bacterial inflammation that can ultimately destroy the intestinal wall. Navy was placed on intravenous antibiotics to treat the NEC, and underwent abdominal surgery to treat her reflux so that she could eat. Separate from NEC and reflux, Navy also had difficulty breathing. Lung scans showed that one of the lobes of her lungs was larger than the other. Pediatric surgeon Shaun Kunisaki, M.D., M.Sc., performed a lobectomy, taking an enlarged lobe off her right lung.

Little Navy’s journey into the world was profoundly challenging, and she remained in the hospital for two and a half months. Finally, she healed enough to go home, where she could continue getting bigger and stronger in preparation for an eventual heart surgery, while routinely following up with Johns Hopkins doctors, including Bret Mettler, M.D., director of pediatric cardiac surgery and co-director of the Blalock-Taussig-Thomas Pediatric and Congenital Heart Center at Johns Hopkins Children’s Center.

Eight months later, in September of 2020, the family returned to the Children’s Center for Navy’s open-heart surgery to fix her tetralogy of Fallot condition and absent pulmonary valve by closing the hole in her heart, moving her pulmonary arteries and making them smaller. Eight hours later, Navy’s surgery concluded successfully. Mettler continued to ensure a safe recovery, and 10 days later, Navy returned home with her parents.

“Navy was a profoundly sick baby who faced many challenges at such a young age because of her unique heart condition and so many other serious health concerns,” Dr. Mettler says. “She has come through everything amazingly well, and will be able to live a healthy life.”

Navy will continue to be followed by her team at the Children’s Center and may need another heart surgery later in life, but for now, Navy is a thriving, sassy, 14-month-old who loves peanut butter and jelly.

“Navy would not be here without Johns Hopkins Children’s Center,” Chelsea says. “The reason God put surgeons here is for people like Navy to be fixed. If there was no one to be fixed, the surgeons wouldn’t have anything to do. That’s how I have to look at it.”