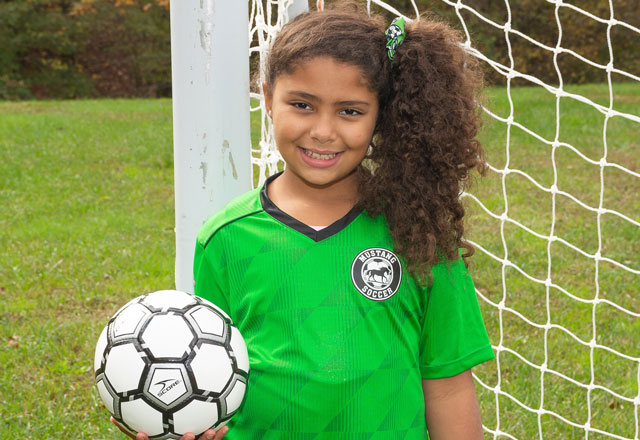 In October 2020, when the world was full of uncertainties, 8-year-old Naomi and her parents, Devin and Adelle, tested positive for the coronavirus that causes COVID-19 despite taking all the precautions they could to minimize potential exposures. The family quarantined for the recommended period, and thankfully, Naomi didn’t exhibit many symptoms.

A few weeks later, everything changed when Naomi began to have difficulty breathing and told her parents her “heart was hurting.” They rushed Naomi to a local hospital, where extensive tests determined that she had multisystem inflammatory syndrome in children (MIS-C), a severe complication that can present up to six weeks after contracting the COVID-19 virus. Naomi was diagnosed at five weeks and five days post-onset.

At the time, not much was known about MIS-C, so doctors recommended that Naomi be immediately transported to Johns Hopkins Children’s Center. Because of the severity of her illness, Naomi was taken by ambulance, and COVID-19 precautions prevented either parent from accompanying her.

At the Children’s Center, Naomi was immediately admitted to the pediatric intensive care unit (PICU) for close monitoring. She had a fever of over 104 degrees and became delirious. Devin and Adelle took turns visiting her.

“I sat by her bedside just praying for her because I really thought I was going to lose her,” Adelle recalls. “I knew this wasn’t just some cold that was going to go away on its own. This was very serious, and we didn’t know much about it.”

Naomi received intravenous immunoglobulin therapy, which helps restore antibodies in the body, and her temperature fell. As she continued to improve, Eric Biondi, M.D., associate chief medical officer and director of the pediatric hospital medicine division, and his team took over her care.

Because of the inflammation caused by MIS-C, Naomi had to relearn to walk before being discharged. With the help of physical and occupational therapists, she regained her strength and returned home after nine days in the PICU.

Naomi is still followed by several Children’s Center specialists to monitor her for potential long-term effects from the MIS-C. She still occasionally experiences periods of shortened breath, but is otherwise healthy and loves to play soccer, jump off the high dive and spend time with friends.

“This was nothing short of a miracle,” Adelle says about her daughter’s recovery. “The doctors and nurses at Johns Hopkins Children’s Center gave us Naomi’s life back.”