Mo: Laughing through the Storm 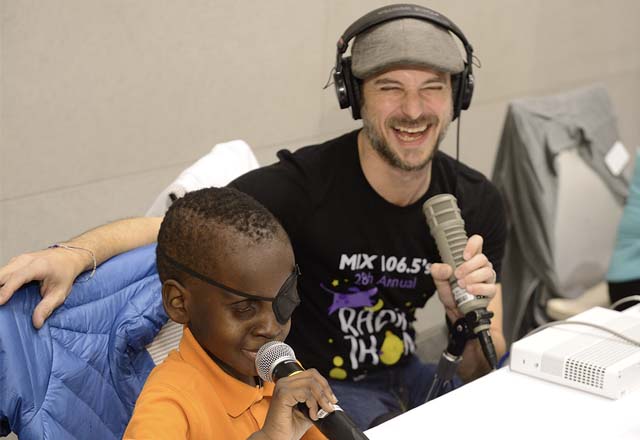 Anyone lucky enough to spend a few minutes with spirited 12-year-old Mossila “Mo” Gaba would never know that he is on the verge of beating cancer for the third time.

His mother, Sonsy, first noticed something wrong with Mo when his eyes appeared white in a photo taken at a family gathering in 2006. Johns Hopkins Children’s Center specialists diagnosed Mo with bilateral retinoblastoma, a malignant tumor of the retina. Sonsy and Mo spent four months in Houston, where Mo was treated with proton therapy.

They returned to Maryland just before Mo’s second birthday in 2008, and he remained healthy until four years later, when he found what he describes as a “bump on my neck.” Physicians at Johns Hopkins Children’s Center diagnosed Mo with a malignant tumor, and he received aggressive chemotherapy, radiation and a bone marrow transplant in early 2013.

Mo remained in remission for the second time until spring of 2017, when he fell in gym class and the pain in his leg wouldn’t go away. After a visit to urgent care, Sonsy brought Mo to the Children’s Center, where scans revealed the cancer had again returned — this time in his right leg and both lungs.

Mo underwent aggressive chemotherapy for both his leg and lungs, in addition to receiving a knee replacement to remove the tumor from his bone. Just before Christmas 2017, Mo began having seizures — a side effect of the chemotherapy. Doctors placed him in a medically induced coma for about one week to allow his brain and body to rest.

In mid-February 2018, Mo underwent the first of two surgeries to remove the tumors from his lungs. He’ll return in late February for his last surgery, with the hope that he’ll be discharged cancer-free and ready to take a much-needed vacation with his mom.