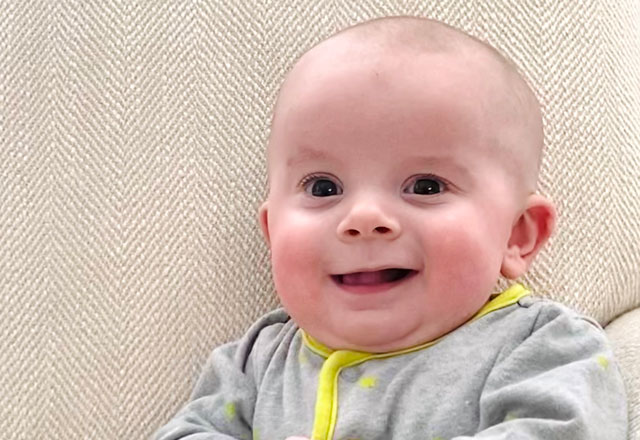 Sarah and Ryan were overjoyed to learn they were expecting their second child in September 2020. Things took a terrifying turn, however, when doctors discovered a hole in baby Max’s heart during Sarah’s 20-week anatomy scan. Sarah and Ryan were immediately referred to Johns Hopkins Children’s Center for more specialized care.

A few days later, they met with Bret Mettler, M.D., director of pediatric cardiac surgery and co-director of the Blalock-Taussig-Thomas Pediatric and Congenital Heart Center at Johns Hopkins Children’s Center. Dr. Mettler diagnosed Max with double outlet right ventricle, a congenital heart defect in which both the pulmonary artery and the aorta are connected to the heart’s right ventricle chamber. Dr. Mettler said that after birth, Max would need open-heart surgery.

“All I could do was focus on maintaining a healthy pregnancy so hopefully Max would get here safely,” Sarah says. “When he was born, I remember just staring at him and thinking, ‘I have fought so hard for you. We made it.’”

Max was immediately admitted to the neonatal intensive care unit. When 6 days old, he began to have trouble breathing and went into heart failure. Because of his small size and difficulty eating, Max had a procedure to place a gastrostomy tube (G-tube) so he could get the nutrients he needed to grow strong enough for surgery.

After nine weeks in various levels of critical care at the Children’s Center, Max finally went home, but Sarah and Ryan knew they’d be back soon when it was time for surgery. Nearly two months later, 4-month-old Max had successful surgery to repair the hole in his heart, but 25 hours afterward, he went into cardiac arrest in the pediatric cardiac intensive care unit (PCICU) and needed CPR for nearly seven minutes.

“I collapsed in the hallway because there was no doubt in my mind that we had lost him,” Sarah remembers. “He wasn’t responsive and there was nothing we could do but pray,” adds Ryan.

Dr. Mettler performed emergency surgery in Max’s PCICU room and discovered that a suture had dislodged, causing him to bleed internally.

This second surgery was another success, and 12 days later, Max was discharged from the PCICU. Today, the 9-month-old boy is enjoying his time at home with his big brother, Bennett, and will return to the Children’s Center every three months for follow-ups with his cardiologist, William Ravekes, M.D.

“They saved my baby, and we’re forever indebted and grateful for everyone who helped us on this journey,” Sarah says. “We wouldn’t be a family of four without Johns Hopkins.”

“We call him Miracle Max,” Ryan says, “because that’s what he is — a miracle.”