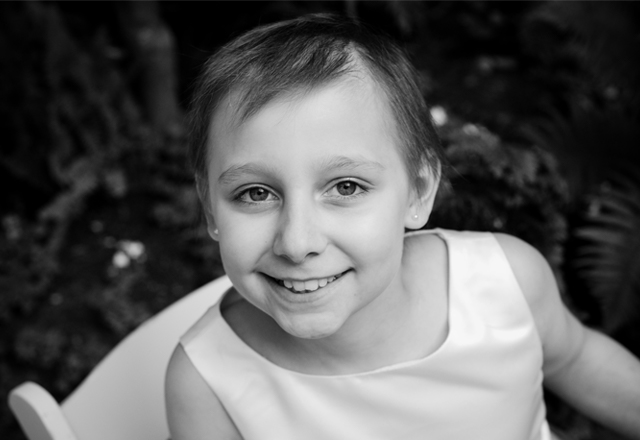 Eight-year-old MacKenzie loved gymnastics, so her parents, Sue and Steve, immediately became concerned when she said she wanted to sit down during practice and that her head hurt. Later that day, Sue heard MacKenzie slur a word, and Sue set up an appointment with her pediatrician for the next day.
After a few tests, some bloodwork and a brain scan, the doctor called MacKenzie’s parents: She had a large brain tumor and they needed to get to Johns Hopkins Children’s Center immediately. A chief resident met them in the emergency department, and MacKenzie had surgery the next morning to remove the tumor. Her surgeon warned Steve and Sue that because of the location of the egg-size brain tumor, MacKenzie might not be able to talk after surgery.

The procedure was a success, and the surgeon reported that they removed the entire tumor. However, after the procedure MacKenzie was unable to speak or move. MacKenzie underwent intensive inpatient occupational, physical and speech therapy to relearn the skills she had lost. MacKenzie later underwent six weeks of radiation and 48 weeks of chemotherapy.

“There were two things MacKenzie was afraid of: needles and losing her hair,” Steve says. “I told her I couldn’t help with the needles, but I’ll be bald whenever you’re bald.”

After almost a year of treatment, MacKenzie lived two healthy, happy years with no evidence of disease. But a routine scan in December 2007 revealed the worst: MacKenzie’s tumor had returned.

After a second surgery to remove the tumor, MacKenzie had two stem cell transplants — and more chemotherapy. A scan in December of 2009 showed the tumor had again come back, and she underwent a third surgery to remove it. MacKenzie also began a phase I experimental treatment that doctors believed would directly target her cancer.

Unfortunately, the treatment wasn’t enough and MacKenzie’s tumor returned for a fourth — and final — time in April 2010. She had defied all odds and surpassed her care team’s expectations, but now her doctors had exhausted all possible treatment options.

Her doctor said they’d never seen anyone in MacKenzie’s condition at that point live longer than six months. MacKenzie lived six months and one day.

“Hearing that MacKenzie’s tumor was back and that there was nothing else we could do was one of the hardest days of our lives,” Sue says. “People say, ‘I can’t imagine,’ and my answer is, ‘Don’t. Don’t try to imagine.’ When she asked me when she was going to die and how long, I told her that we don’t know when anybody is going to die, something could happen to anybody at any moment. We were going to do everything we could and spend all of our time together.”

After a courageous five years of fighting, 13-year-old MacKenzie took her last breath while surrounded by her family and friends on Oct. 19, 2010. MacKenzie’s dad kissed her on the forehead one last time before he carried her out of the room.

“She had really gone downhill the last few days — she had a high fever, and was in a ton of pain,” Sue says. “But by the time she died, it was almost welcome. I was holding her, and you could tell she wasn’t hurting anymore. She died with a smile on her face.”

“I think Kenzie would want us to remember her as somebody who never gave up, who always found the silver lining and was always able to be positive,” Steve says. “I believe that her journey was a miracle because she touched so many people who have gone on to do so many bigger things—many of her friends are now in the oncology and rehabilitation fields or became because of her. We often sell ourselves short of what our impact could be because we can’t envision the result, but it doesn’t matter if you see the end result. It’s there.”

MacKenzie started treatment shortly before Mix 106.5's Radiothon benefitting the Children's Center in 2006, returning every year. She also represented the Children's Center and the state of Maryland as a Children's Miracle Network Hospitals (CMNH) National Champion in 2010. During her five years of treatment, she never shied away from any request that she speak at an event that would raise awareness and funds for pediatric cancer research and quality of life programs.