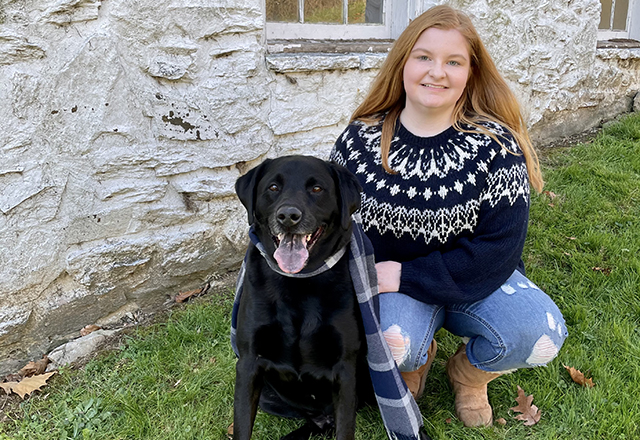 When 6-year-old Maci’s mother, noticed that Maci’s stomach was swelling, she immediately made an appointment with her pediatrician. The next day, Maci woke up to discover that her face was extremely puffy. Fearing an allergic reaction to something, Ronda and Stephen, Maci’s dad, took their daughter to a local hospital, where doctors discovered that she had alarmingly high levels of protein in her urine. They diagnosed her with nephrotic syndrome, which results from damage to the filtering part of the kidneys. This damage causes too much protein to be lost from the blood into the urine and can lead to swelling, especially around the eyes and on the feet and hands. Other complications can develop if left untreated.

The doctors discussed Maci’s case with the kidney doctor on call at Johns Hopkins Children’s Center, then sent Maci home on medications to treat nephrotic syndrome. Maci saw pediatric nephrologist Jeffrey Fadrowski, M.D., at the Children’s Center, and despite the treatment, her condition had not improved. Fadrowski recommended an in-patient kidney biopsy to assess why she was not responding to medications.

A few weeks later, Maci was admitted to Johns Hopkins Children’s Center, where she underwent a kidney biopsy — which confirmed her earlier diagnosis of nephrotic syndrome.

“You feel completely helpless and alone when your child is admitted to the hospital,” Ronda says. “I was extremely scared not knowing what to expect.”

Maci was discharged the next day with a new treatment plan, but she continued to experience significant swelling — so much so that she couldn’t participate in daily activities, and her parents needed to buy clothing two sizes bigger for her. Maci’s body was still not responding to the medications. Ronda and Stephen brought her to the emergency department at the Children’s Center, where she was immediately admitted.

With treatment, nephrotic syndrome is not typically a severe or fatal condition for children. But along with failing to respond, Maci’s body reacted negatively to the medications, and she became extremely ill. The day after being admitted at Johns Hopkins, Maci had a seizure, and her breathing and heart rate were severely compromised.

“Watching my child get chest compressions was the most horrific thing I’ve ever seen. I felt completely helpless,” Ronda recalls. “I kept praying: Please don’t let her die. I asked every person who came out of her room if she was alive.”

Doctors treated Maci’s seizure and placed her on a ventilator. “I felt guilty that I couldn’t do more for her,” Ronda says. “All we could do was be there, hold her hand and pray. I’ve never prayed so much or so hard in my entire life.”

Two weeks later, Maci’s care team took her off the ventilator. She was able to breathe on her own and her kidney function slowly improved. After 28 days in the hospital, Maci returned home. Due to the extended time in bed, she had lost muscle strength in her legs and needed daily physical therapy to relearn how to walk.

Now 16, Maci has remained healthy for the past 10 years but must regularly monitor from home the protein levels in her urine. She returns to the Children’s Center once each year for follow-up.

“I believe in miracles because I have one, and her name is Maci,” Ronda says. “How do you ever say thank you to the doctors and nurses who saved your child’s life?”

Inspired to give back to the hospital, Maci is a member of the Johns Hopkins Children’s Center’s Teen and Children’s Council (TACC), and helps plan events like Baltimore Boogie and the annual Children’s Center prom. As a TACC member, Maci also serves as a valuable resource for care providers and hospital leadership, providing insight and feedback to improve the patient experience and helping to create educational material related to hospital initiatives.