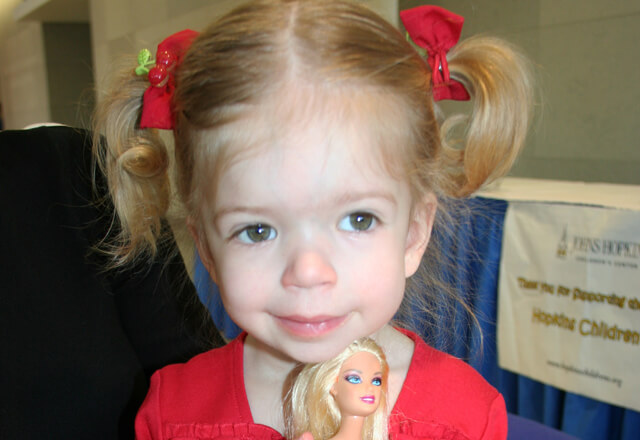 Lucy was a perfectly healthy infant until the fall of 2011, when her parents noticed that the shape of her head was changing - a bump, a protrusion was forming in the back of her skull and her forehead was becoming more prominent. A head ultrasound ruled out the worst - brain inflammation and brain tumor - but Lucy's parents remained concerned.

After extensive online research, Lucy's mom, Katie, came across a condition that fit Lucy's symptoms: craniosynostosis, a premature fusion of the cranial sutures between the bones of a baby's skull. Babies are born with incompletely fused skull bones to accommodate brain growth during infancy. Typically, these sutures fuse around 1-2 years of age, but in some children this fusion occurs prematurely. Such early closing can restrict brain growth, lead to developmental anomalies and cause a misshapen skull.

In the spring of 2012, the Jenkins family came to Johns Hopkins Children's Center where they met pediatric neurosurgeon Dr. George Jallo and plastic and reconstructive surgeon Dr. Amir Dorafshar.

Even though craniosynostosis repairs have been done for many years, the Hopkins surgeons used a novel approach that ensured greater accuracy and precision. Before the surgery, Lucy underwent a 3-D head CT scan, which allowed the surgeons to meticulously plan every cut before they even made the first incision.

This virtual pre-surgery mapping helps reduce the chance for error and increases the precision and accuracy of execution. Based on the 3-D images, the surgeons also create shaping guides, which they put on the patient's head before the procedure to help them navigate more precisely during the actual operation.

This approach is vastly superior to the current technique of simply "eyeballing" it, says Dr. Dorafshar. It is particularly useful in infants who are diagnosed later and in whom minimally invasive surgery is no longer an option.

"When Dr. Dorafshar talked to us about it, I immediately felt that it was in Lucy's best interest to have it done. Our insurance company initially did not want to authorize it, but I spent quite a bit of time on the phone with them to make sure it would be covered as a special exception," Katie says.

Lucy's parents even saw the computer models of Lucy's head along with the planned cuts and reconstruction.

"That made us feel very confident in what they were doing, and I knew right then that the surgeons had done their homework," Katie adds.

On Aug. 8, 2012 Lucy underwent a five-and-a-half-hour surgery. Most of it went very smoothly, but toward the end, Lucy began bleeding heavily and her blood pressure dropped precipitously. She ended up needing four units of blood. Thankfully, the rest of the procedure was uneventful, and Lucy went to the pediatric intensive care unit that day.

However, when Dr. Dorafshar stopped by the PICU that day to check on her, he saw an alarming sign - Lucy's abdomen was so swollen that it was pushing on her lungs causing her to have difficulty breathing. Luckily, she was still on a breathing tube as a precaution coming out of surgery. Lucy had developed abdominal compartment syndrome as a result of the fast infusion of blood during the surgery. To release the penned up fluid from her abdomen, Lucy had to have a minor procedure, which relieved pressure and restored normal breathing.

"It was extremely difficult to see our baby looking like that," Katie says. "With her various lines, drains, breathing tube and head wrapped. The only thing I remember about that time was hearing Dr. Dorafshar's voice, and that was all I could focus on. He was so calm and reassuring, and that was exactly what I needed to stay composed and to begin to focus on helping Lucy to recover."

From that point on, Lucy grew stronger, acted a little feistier and her bubbly personality started to come back. By the time, she left the hospital, Lucy was sitting up on her own, crawling around her crib, playing, laughing and talking.

Today, Lucy is perfectly healthy, much to the delight of her parents and surgeons. Lucy loves to visit Hopkins and knows the doctors and staff took excellent care of her; when asked about her doctors, she fondly says "they fixed my head!" Lucy no longer needs follow-ups.

"I can't say enough about the care Lucy received while she was in the hospital," Katie says. "Lucy's surgery changed my life, and I will always be so thankful for the care Lucy received, in particular from Dr. Dorafshar, Dr. Jallo, Dr. Carson, Dr. Whitaker, Dr. Greenberg, Dr. Abdullah, and all of the attending physicians, PICU nurses and staff. We feel very fortunate that we live so close to Johns Hopkins Children's Center."