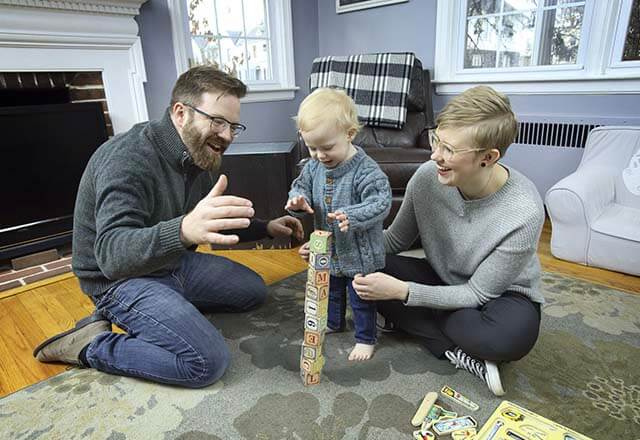 Loudon Jack, or L.J., came into the world pink and healthy, acing all of his tests for a newborn. However, after two weeks of excellent health, he began to have difficulty breathing. L.J.’s mother, Alena, a nurse at Johns Hopkins Children’s Center, noticed that he began to breathe extremely fast when being held.

Measuring his breathing, Alena counted a rate of 60 breaths per minute—abnormally high for a newborn. L.J. didn’t seem sick, had no fever and was eating well. Before Alena could call his pediatrician, L.J.’s breathing returned to normal.

The next day, the baby again began to breathe extremely fast and was rushed to Johns Hopkins Children’s Center with a rate of 94 breaths per minute. As they arrived at the Children’s Center, L.J.’s breathing returned to normal.

After extensive monitoring, emergency department visits and echocardiogram tests, L.J. appeared to be a healthy baby whose rapid breathing would eventually resolve each time. The only other symptom was a small red spot on his chest that was suspected to be a hemangioma.

Determined to find out why L.J. was breathing so fast, his mother took him to see Johns Hopkins pediatric pulmonologist Dr. Jessica Rice. Dr. Rice initially thought the baby had an interstitial lung disease, but after a consultation with Dr. Bernard Cohen, L.J. was diagnosed with a rare hematological disorder called juvenile xanthogranuloma (JXG) that causes a variety of tumors and lesions. Less than two in every 200,000 people have this form of histiocytosis.

Dr. Rice and Dr. Cohen led further exploration and discovered innumerable nodules in L.J.’s lungs and lesions all over his brain and spinal cord. Genetic sequencing revealed a rare and aggressive tumor marker, commonly found in lung cancers, that was causing L.J.’s tumors.

After six cycles of chemotherapy, the tumors “have shrunk to almost nothing,” Alena says.

“Because L.J.’s diagnosis is so rare, there’s no prognosis with this, so the best metric of how he’s doing is actually how he is doing, and he’s great—he’s a lot of fun,” says the baby’s father, Wes. “The tumor in his spine was scary, and had we not had the ability to address that early on it could have led to paralysis. Now he runs faster than his older brother.”

While in the hospital, L.J. watched the animated film Moana on repeat, loving Maui, the fearless adventurer and protector. Alena is confident that, just as Maui protects his people, the doctors at Johns Hopkins Children’s Center will continue to care for and protect L.J. as he grows into his rambunctious and spirited self.