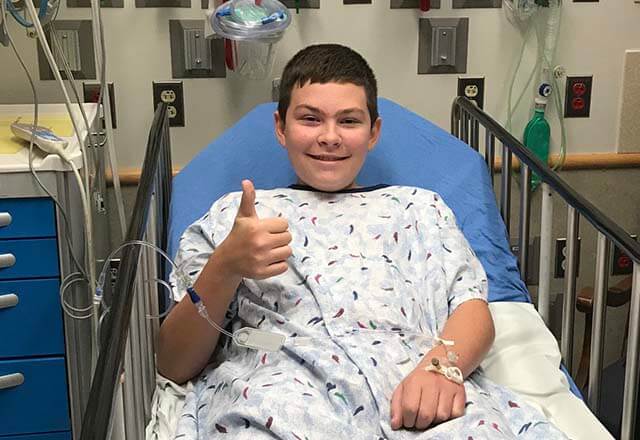 It took seven years of hospital visits, countless specialty appointments and infinite MRIs before John Kemp Jr. and his family finally received good news — in the form of a diagnosis from a doctor at Johns Hopkins Children’s Center.

John Jr.’s symptoms first started in 2009 when he came home from preschool in severe pain and having trouble breathing. After local doctors in Florida diagnosed John Jr. with pneumonia, his mom, Jennifer, began to notice something else was wrong.

Months later, he was still in severe pain that only continued to spread to other parts of his body. On Christmas Day, John Jr. couldn’t even open presents because his back was in so much pain. Doctors across the country struggled to find the cause. By December 2013, John Jr.’s symptoms were so unbearable that he was reliant on a wheelchair.

Finally, a neurosurgeon at a local hospital noticed something in John Jr.’s spine. He recommended the Kemp family reach out to other hospitals that specialize in rare conditions. The Kemps sent John Jr.’s images to and visited numerous children’s hospitals around the country — John Jr. even underwent an angiogram.

After a few months, Jennifer received a call from interventional neuroradiologist Philipe Gailloud at Johns Hopkins Children’s Center, who thought he had the key to solving her son’s case. Jennifer and her husband, John, packed up their family and traveled to Baltimore in search of answers for their son. Arriving at the Children’s Center, they met Dr. Gailloud, and after years of questions, they finally had the answer: There was a fairly large vascular malformation coming from John Jr.’s kidney into his spine. In addition to finding an answer, Dr. Gailloud immediately performed surgery to fix the problem while Jennifer and John waited anxiously.

In the hopes of sending John Jr. home and back to a normal environment, he underwent a CT scan to confirm the surgery’s success the next day. Just as the procedure started, he screamed out for his parents as he fell back onto the table. Within seconds a rapid response team was on their way.

“We saw the life go from our son and come back,” said John.

In January 2015, John Jr. got sick again. He had a fever, a sleeping heart rate of 180 beats per minute and his eye was beginning to droop. A local pediatrician advised that John Jr. return to Johns Hopkins Children’s Center as soon as he was stable enough to travel.

Once again, Jennifer and John packed up everything and drove to Baltimore. Twenty doctors did everything in their power to figure out what had happened this time. Diagnosed with Graves’ disease, Hashimoto’s disease and atypical dysautonomia, John Jr. returned home to Florida six months later.

Although it has been a long journey, John Jr. has made great strides and improvements since his first incident in January 2009. Jennifer believes that every step they took led them to Johns Hopkins.

Today, John Jr. is 12 years old. He has regained his ability to walk and only occasionally needs his wheelchair. His team of doctors have become his close friends and heroes. He wants to be just like them when he grows up, so much so that he hopes to train at Johns Hopkins to be a neurointerventional radiologist.