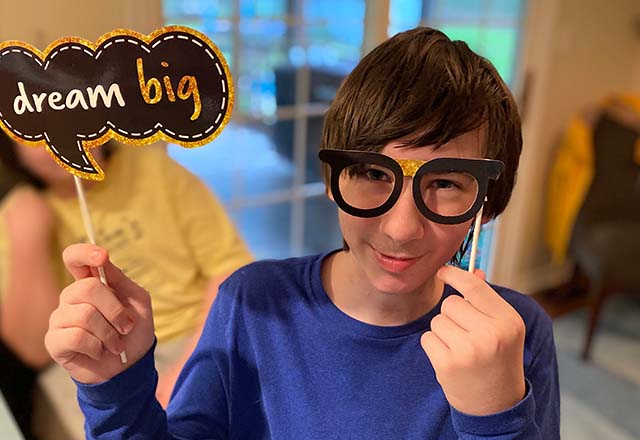 While roughhousing with his stepdad, Aren, 11-year-old Jake took a tumble, hitting his jaw. Jake’s mother, Megan, immediately noticed swelling. The next day, Jake’s jaw had swelled to the size of a softball, and Megan made an appointment with Jake’s dentist. Suspecting that Jake’s wisdom teeth were coming in, the dentist referred them to a dental surgeon.

“About an hour and a half into the surgery, I knew something was wrong — it was taking too long,” Megan recalls. “Sure enough, Dr. Steinberg came out and they took us into that room where no one wants to go. They said that Jake had lost a lot of blood, and they couldn’t get the bleeding to stop. I was afraid I was going to lose my son.”

Jake’s care team was able to stop the bleeding, and after spending a week in the hospital, the family returned home to await the results of the biopsy.

When doctors called with the biopsy results, Megan heard the news no parent wants to hear: Jake had Ewing’s sarcoma, a very aggressive bone cancer, in his jawbone.

Jake’s cancer had been lying dormant for approximately nine months. When Jake fell, he ruptured the blood vessel, causing it to swell.

“When I heard cancer, I kind of freaked out right then and there,” Jake says. “I’d never been scared the way I was when I heard them say that I have cancer.”

Under the care of pediatric oncologist Christine Pratilas, M.D., Jake underwent 16 rounds of chemotherapy and 35 rounds of radiation, spending many nights as an inpatient to shrink “Phil” — what Jake had named his tumor. Upon completion of these therapies, he underwent a 16-hour surgery, during which pediatric otolaryngologist Jonathan Walsh, M.D. removed the mass from Jake’s jawbone, also removing half of his jaw. Steinberg then reconstructed Jake’s jaw using the fibula bone from his leg.

“Surgery is always scary, especially to a kid,” Aren says. “I always tried reassuring Jake it’s OK to be scared, but we have to trust that everything will be OK.”

After surgery, Jake’s jaw was wired shut and he had a feeding tube. He needed to relearn how to walk, talk and eat, and he underwent physical therapy while in the hospital to build up the strength in his leg. Three weeks later, Jake finally returned home — continuing with physical therapy for several months.

“It was our great honor to take care of Jake, who is one of the most mature, humble and optimistic young patients we have ever had go through such a trying experience,” Steinberg says. “We had an incredible team all around. The power in Jake’s story is a shared message of hope, resilience and possibility available in a place like Johns Hopkins Children’s Center.”

Today, 13-year-old Jake is cancer-free and returns to the Children’s Center every three months for scans and bloodwork. He will soon get implants to replace teeth in the newly reconstructed jawbone.

“Johns Hopkins Children’s Center saved our son,” Megan says. “How do you repay someone who gave your son life?”