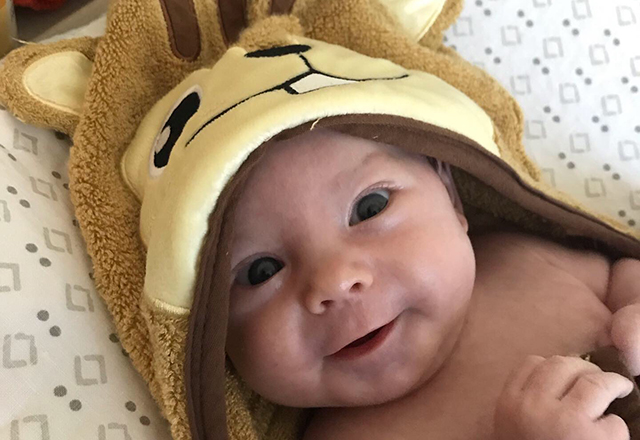 After undergoing several rounds of fertility treatment, Jen M. and Jen B. were ecstatic when it finally worked. They knew that if their baby was a girl, she had to be named Hope.

During Jen M.’s eight-week ultrasound at their fertility clinic, the doctor detected two heartbeats, and "the Jens" were stunned and giddy at the thought of having identical twins. Sadly, one week later at the nine-week ultrasound, doctors detected only one heartbeat. The Jens remained hopeful that the pregnancy would remain viable, and Jen M. began seeing an obstetrician at a local hospital.

But at Jen M.’s second trimester anatomy ultrasound, the physician detected something wrong. He suspected twin reversed arterial perfusion — also known as a TRAP pregnancy — something he had never seen firsthand in his 40 years practicing medicine. He immediately referred Jen M. to the Johns Hopkins Center for Fetal Therapy.

“I remember this wave of panic setting in, along with all those old feelings of uncertainty and thinking, ‘Oh no, what is going to happen with this pregnancy?’” recalls Jen B.

The next morning, Ahmet Baschat, M.D., director of the Johns Hopkins Center for Fetal Therapy, confirmed the diagnosis of TRAP — a rare condition of monochorionic twin pregnancies. Baschat explained that one heart was doing the work of supplying blood for both twins. In monochorionic twin pregnancies, the twin supplying the blood is known as the “pump twin” and develops normally. The other twin — known as the “acardiac twin” — lacks a heart or has one that is not fully formed — thus explaining the singular heartbeat.

In some cases, the pump twin survives without any intervention, but the increased pumping of the heart puts this fetus at severe risk for cardiac failure, and surgical intervention may increase chances of survival.

“We could see how hard her little heart was working, and we didn’t want to put any more stress on Hope. At that point, I just wanted her to live, and hoped that her heart would be OK,” Jen M. says. “We felt like we were in the right place, where we were getting the best care we could possibly hope for, and so we made the decision to operate.”

The next day, Jen M. underwent a radiofrequency ablation procedure, performed by fetal therapy specialist Jena Miller, M.D., to cut off the blood supply to the acardiac twin, alleviating the extra stress on the pump twin’s heart. After the procedure, Jen M. spent a night as an inpatient at The Johns Hopkins Hospital for close monitoring. Ultrasounds confirmed that “everything was fine,” and Jen M. was discharged the following day.

Near Hope’s due date, doctors determined she was breech. Rosner performed an external version procedure, with Baschat closely monitoring Hope’s heart, in an attempt to turn her from the breech position. Ultimately, Jen M. underwent a cesarean section, delivering a happy, healthy Hope. Rosner performed the c-section, and Jen M. fondly remembers Baschat staying with them during the procedure.

“We heard a little cry, and they asked if I wanted to cut the umbilical cord. Then they wrapped her up and let me hold her, and it was just surreal,” recalls Jen. B. “She looked adorable and had the sweetest little smile on her face. She was perfect.”

Now 18 months old, Hope does not require any additional follow-up at Johns Hopkins. She is strong-willed, loves to laugh and enjoys kicking around a soccer ball with her moms.

“We are forever indebted to the team at the Johns Hopkins Fetal Therapy Center,” says Jen M. “They are like family to us, and we wouldn’t have Hope without them.”