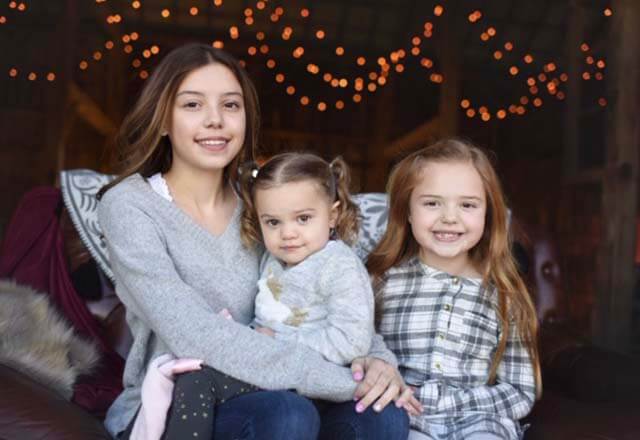 Emme was born healthy, at 8.5 pounds. However, her parents, Matthew and Laura, noticed something was wrong shortly after her first birthday, when she started learning to walk: Emme never took more than a few steps at a time. At first, Matthew and Laura thought, “Oh, she’ll walk when she’s good and ready.” Months went by, and eventually she stopped trying to walk entirely and resorted to scooting. Around the same time, Emme’s parents noticed tremors in her hands and legs, and they immediately became concerned.

Matthew and Laura knew something was very wrong when the shaking got worse and she didn’t seem like her usual lively self. They brought Emme to her pediatrician, who ordered an MRI and directed them to pediatric neurologist Thomas Crawford at Johns Hopkins Children’s Center.

The MRI revealed a large tumor on her cerebellum, which had likely been there since she was born, possibly even when Laura was pregnant. Doctors admitted Emme that same day for emergency surgery to remove the tumor. Eight hours later, her neurosurgeon had completely removed her tumor.

After a week recovering at the Children’s Center, Emme could go home. Despite the excitement, Laura knew Emme wasn’t back to her normal self, so she kept a close eye on her. When a fever spiked a day later, Emme’s parents brought her back to the Children’s Center, where she was admitted with meningitis. Emme was so sick she wasn’t allowed to leave her hospital room. She eventually began to respond to antibiotics.

Once home a week later, Emme had to learn how to perform basic functions all over again. She relearned how to sit up and move, and she began talking and walking again.

“When she finally started smiling and laughing again it was amazing because she hadn’t done that in months,” Laura says.

Today, Emme is a happy, strong-willed 2.5–year-old. Although her tumor was benign, she was left with some long-term side effects. She is a little behind developmentally, and she has weakness on her left side. She wears a brace on her left leg and is doing therapy to increase her strength. Emme still returns to Johns Hopkins for regular checkups.

“Johns Hopkins Children’s Center has given my daughter a new lease on life and given her opportunities that she wouldn’t have otherwise,” Matthew says.