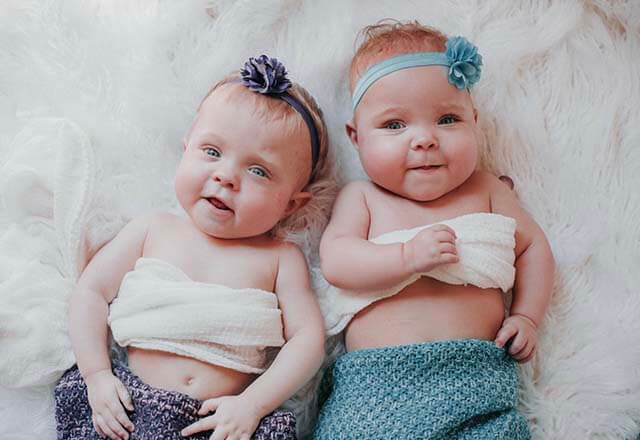 After a rocky pregnancy and multiple doctor appointments, Charissa and her husband, Kevin, were transferred to Johns Hopkins Children’s Center with a high-risk multiple pregnancy. At 25 weeks and three days, Charissa delivered Elle and Emme, and doctors gave the twins a 10 to 15 percent chance of survival.

Two days after the girls were born, Kevin and Charissa received more bad news: Elle and Emme both had bleeding in their brains. Although Elle would likely heal on her own, Emme had a larger bleed in the back of her brain that caused hydrocephalus. Doctors told Kevin and Charissa that the babies probably wouldn’t be going home anytime around their original due date — if they got to go home at all.

Emme had surgery to place a subgaleal shunt, which would help collect cerebrospinal fluid off her brain, at just 21 days old. Three days after Emme’s surgery, her parents received a call that she had taken a turn for the worse: she had coded and they almost lost her. Thankfully, her team of doctors revived her.

At just shy of 2 months old, Emme underwent a second surgery to receive a permanent shunt to relieve pressure on her brain. Charissa and Kevin finally took Emme and Elle home just four days past their original due date, after spending 106 days in the neonatal intensive care unit.

“We were sent to Johns Hopkins Children’s Center because this was the place that was going to save my babies, and they did,” says Charissa.

Today, Elle is a joyful 18-month-old, walking, talking, running, dancing and climbing. Despite having multiple surgeries at such an early age, Emme is is also making amazing progress. She is sitting unassisted and learned to use her gait trainer. She loves to talk/babble and play with her sister.

Listen to Elle and Emme's story.