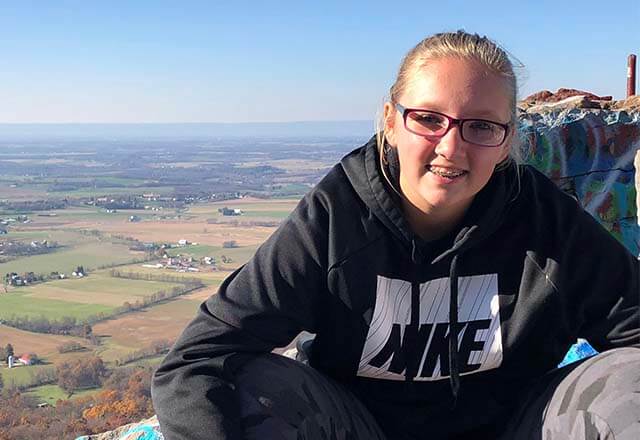 After welcoming a new kitten home on Easter Sunday, 8-year-old Destiny told her mother, Marie, that her leg hurt. Marie noticed a lump on Destiny’s leg and immediately brought her to urgent care. Doctors believed the girl had cat-scratch disease (CSD) and sent her home with antibiotics. She was still in pain a few days later, so Marie called her pediatrician and took Destiny to their local hospital, where doctors stopped the antibiotics and began treating Destiny for methicillin-resistant Staphylococcus aureus (MRSA).

After a few days without improvement, Destiny’s doctor told Marie they couldn’t come up with a diagnosis for Destiny. He was certain if anyone could figure out what was wrong, it was the infectious disease team at Johns Hopkins Children’s Center.

At the Children’s Center, Marie and Destiny met with a pediatric infectious disease specialist and a pediatric oncologist, and they determined the best course of treatment was surgery to remove and biopsy the mass on Destiny’s leg.

Before they could operate, Destiny began to seize. The rapid response team closely timed and monitored her seizure, knowing there was no harm until her seizing reached the five minute mark.

“As soon as she hit the five minute point, her room was transformed like an episode of ER,” recalls Marie. “There were doctors and nurses everywhere doing everything they could to get my daughter to stop seizing, and they couldn’t.”

Destiny needed to be transferred to the pediatric intensive care unit, and while on the way her doctor received a call with a diagnosis: Destiny did have cat-scratch disease, and the infection had spread to her brain.

Destiny’s brain needed to rest, so doctors placed her in a medically induced coma for three days while they treated the CSD with heavy antibiotics. Unfortunately, when they started to wake her up on the third day, her brain was still seizing. It needed more rest.

“While Destiny was in the coma I cried every single night,” Marie says. “The care team was phenomenal. I’ll never forget how important they made me feel while they were taking care of Destiny.”

After 10 days, Destiny woke up.

“The first time I asked her to say ‘mommy’ and she actually said it, I knew I had my daughter back,” Marie says.

Five days later, Destiny returned home on anti-seizure medication to treat epilepsy—a lifelong diagnosis as a result of the infection in her brain. Doctors determined that the family’s new kitten must have licked a mosquito bite on Destiny’s leg.

Destiny has spent many nights at the Children’s Center when her seizures returned over the years. Now 15 years old, she continues to be followed by pediatric neurology resident April Sharp. Since May 14, 2018, Destiny has had only one seizure.

“If it wasn’t for the doctors and nurses at Johns Hopkins Children’s Center, I wouldn’t be here,” Destiny says.