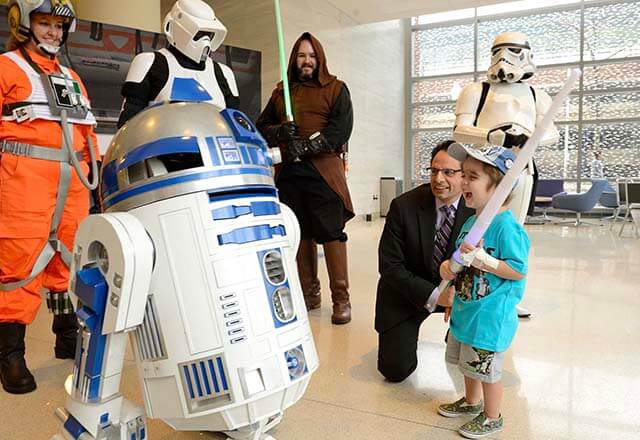 When Declan was 5, his parents, Stevi and Brian, noticed he was getting frequent headaches and had stopped growing. Not knowing what to expect, Stevi took Declan to a local hospital. During testing for growth hormone deficiency, an MRI revealed that Declan had a large craniopharyngioma brain tumor.

Doctors urged Declan and his family to come to Johns Hopkins Children’s Center immediately. The severity of Declan’s situation didn’t sink in for Stevi and Brian until they spoke to pediatric neurosurgeon Alan Cohen.

The mass on Declan’s brain was not cancerous, but it was large, calcified and wrapped around his optics. Dr. Cohen wouldn’t know the severity of the tumor until surgery. And while there were many risks — including blindness, permanent brain damage and change in personality — Declan underwent lifesaving brain surgery to remove the tumor.

After nine long hours, Dr. Cohen finally delivered good news: The surgery was a success. Declan woke up shortly after and was his usual self. He spent three weeks in the pediatric intensive care unit before going home.

Declan returned to Johns Hopkins every three months for an MRI. Everything looked great until one day the scans revealed that his cyst was growing back and his ventricles were swelling. He would need another surgery, but his doctors wanted to push it back as long as possible.

Two weeks later Declan had a seizure, started vomiting and wasn’t acting like himself. Stevi called an ambulance as Declan remained completely silent. He didn’t say anything on the entire ride to the hospital.

“There was definitely a time that I thought I would be planning his funeral,” said Stevi.

Declan underwent surgery for a second time to remove the cyst; however, it was so close to Declan’s eyes that doctors couldn’t surgically remove the entire cyst without damaging his brain. Declan would need radiation therapy to remove the rest of the tumor, which he received at an outside hospital.

Unfortunately, the radiation therapy exacerbated Declan’s cyst, and he needed a third brain surgery in December to drain it. Doctors are hopeful the treatment has been a success, and they will continue to monitor Declan’s care.

Today, Declan is a happy 6-year-old kindergartner. He loves all his doctors, but if he could tell his brain tumor one thing it would be, “get out of there!”